A source close to California Gov. Gavin Newsom today told The Defender the governor experienced an adverse reaction to the Moderna COVID vaccine he received Oct. 27.

The source, who asked not to be identified, said Newsom’s symptoms were similar to those associated with Guillain–Barré syndrome (GBS), a known side effect of many vaccines.

GBS is a neurological disorder in which the body’s immune system mistakenly attacks part of its peripheral nervous system — the network of nerves located outside of the brain and spinal cord — and can range from a very mild case with brief weakness to paralysis to leaving the person unable to breathe independently.

The governor has not been seen in public since he was photographed Oct. 27 getting his COVID booster.

On Oct. 29, Newsom’s office issued a statement referring to unspecified “family obligations” as the reason the governor canceled his scheduled appearances, including his planned meetings at the global COP 26 climate conference in Glasgow, Scotland.

A local ABC News outlet reported that when “the surprising announcement was made,” a spokesperson said Newsom planned to participate virtually in the climate conference. However, Newsom’s name was removed from the schedule and he did not participate.

The Defender reached out to Newsom’s office today by phone and email, but the office did not respond before publication.

According to Fox News, Newsom’s wife, Jennifer Siebel Newsom, on Sunday tweeted — then quickly deleted — a message urging people to “stop hating” while her husband has been out of the public eye since canceling plans, including his appearances at COP 26. 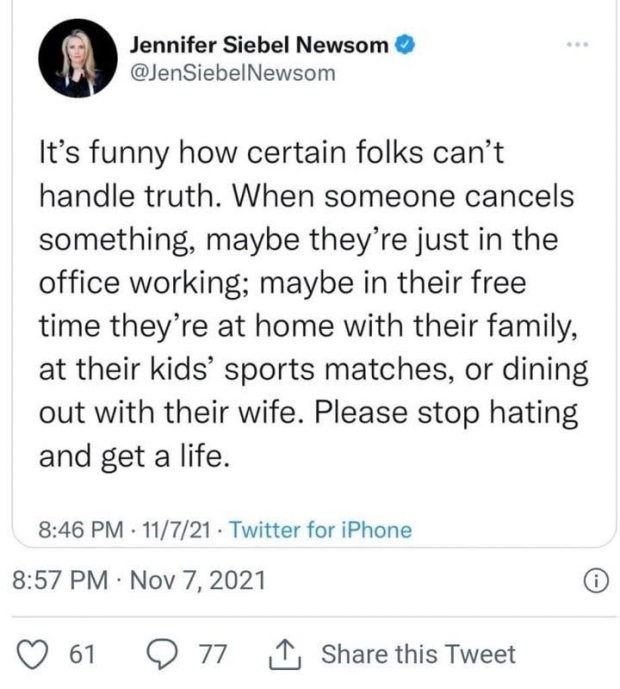 Commenting on the situation, Robert F. Kennedy, Jr., chairman of Children’s Health Defense, today said he “prays for Newsom’s family” and wishes him a quick recovery.

“However, if it’s true the governor has suffered debilitating neurological injuries following vaccination, it raises grave ethical questions about his seemingly dishonest efforts to conceal his injuries while implementing aggressive policies to force the children and working people of California to endure similar risks.”

Newsom has been an outspoken advocate of COVID vaccines and mandates. On Oct. 1, he announced California’s schoolchildren will be required to get the COVID vaccine once it is fully approved by the FDA. It’s the first such mandate in the country.

In a Nov. 3 press release, the governor’s office said California was launching a “robust” vaccination program for 5- to 11-year-olds. The governor has allocated more than 1.2 million vaccines for the 5-11 age group and is setting up 4,000 vaccine sites throughout the state.

According to Times of San Diego, Newsome got the Johnson & Johnson (J&J) COVID vaccine in April 2021 when his age group became eligible. In July, the U.S. Food and Drug Administration added a warning to the J&J COVID vaccine noting the vaccine had been linked to GBS.

Since 1992, the National Vaccine Injury Compensation Program has paid approximately $500 million to 1,450 victims of post-vaccination GBS, The Defender reported.

Where D.C. Goes From Here After Pelosi’s Big Day Thanks to Bailouts, Wall Street Banks Are More Fragile than Ever