By Abigail Shrier
The Truth Fairy

Funny thing about truth: like the Genie, it can’t be shoved back into the bottle.

On Monday, I published probably the most important piece of my career thus far: an interview I did with two top gender medical providers – vaginoplasty expert and gender surgeon Dr. Marci Bowers and child psychologist at the UCSF gender clinic, Erica Anderson, who spoke candidly about risks of current treatment protocols guiding transgender medicine.

For the first time in the U.S., top gender medical providers collectively acknowledged four facts: early puberty blockade can lead to significant surgical complication and also permanent sexual dysfunction; peer and social media influence do seem to play a role in encouraging the current, unprecedented spike in transgender identification by teen girls; and the World Professional Association of Transgender Health (WPATH) – of which both Bowers Anderson are board members – has been excluding doctors who question current medical protocols to its detriment.

But the bombshell – the point made to me in interviews with so many endocrinologists, but never by any providers of transgender medicine – was that “orgasmic naïveté” is real and it’s a problem.

When you block puberty, the problem is that a lot of the kids are orgasmically naive. So in other words, if you’ve never had an orgasm pre-surgery and then your puberty’s blocked, it’s very difficult to achieve that afterwards. And I think that I consider that a big problem, actually. It’s kind of an overlooked problem that in our informed consent of children undergoing puberty blockers, we’ve in some respects overlooked that a little bit.

(After the piece came out, Bowers asked me to qualify that although she told me she was “not a fan” of early puberty blockade, it might still be appropriate in very severe cases of gender dysphoria.)

Regarding the risk of sexual dysfunction posed by early puberty blockade, Bowers had said something to this effect before. Her most famous patient – reality TV star and transgender teen Jazz Jennings – has said on the show that she has never experienced orgasm and she likely never would.  After that revelation on the show, “I Am Jazz,” As Bowers put it this way on “I Am Jazz”: Patients who “are “are able to orgasm pre-surgery, they’re very highly likely to be able to orgasm afterwards.” But “Jazz does not know what an orgasm is and it’s very important when expressing intimacy,” she said. “And although it is not something that’s going to delay surgery, it’s not going to be any easier for her to have an orgasm after surgery.”

The mainstream media ignored this. And even to the millions who watched the show, it was not clear whether this was a unique feature of Jazz’s transition, or whether this was a predictable risk of early puberty blockade. Several endocrinologists I interviewed for my book told me they believed it was the latter, but no practitioners of gender medicine had ever acknowledged this. 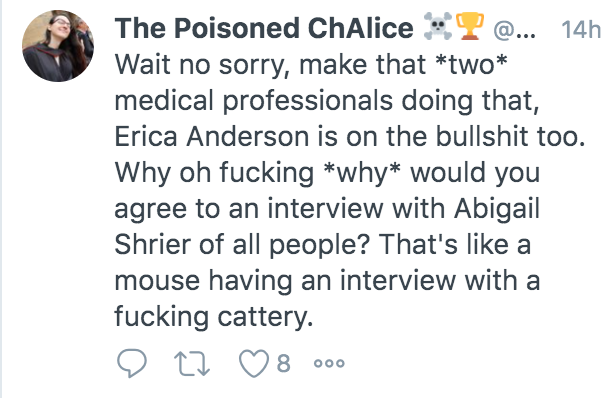 I am personally aware of families who were counseled to put their own children on puberty blockers by some of the best gender clinics in this country—and never told of this risk. Parents have been pressed to put their children on early blockade without full information or, therefore, informed consent. Because Bowers spoke up, they will now know better what’s at stake. Some families may choose a different path based on this information.

Anderson and Bowers said other important things too. While they both pointed out that “Rapid Onset Gender Dysphoria” is not an accepted diagnosis, Anderson acknowledged that the population of teen girls currently claiming to be transgender – suddenly in adolescents – may be a very different population from the typical patients of gender dysphoria.

Rational Treasure Is The Economy Being Crashed on Purpose?