Two quite different personalities who are observers of the world scene that I follow are James Corbett of the CorbettReport.com and the populist lawyer Robert Barnes of VivaBarnesLaw.Locals.com.

Barnes is involved in many lawsuits to counter vaccine mandates. In his public explanations he has noted Jacobson v. Massachusetts, the Supreme Court case enshrining forced vaccinations into American jurisprudence. It is the key precedent for Buck v. Bell that upheld forced sterilization for the “unfit.” Barnes has explicitly pointed to the eugenics decisions as the legal basis for the Covid mandates.

Corbett has produced detailed and perfectly sourced documentaries, including Why Big Oil Conquered the World (also see the related How Big Oil Conquered the World), that explain the history of the Eugenics movement. At 31:52 read the quote from Oliver Wendell Holmes, Jr in his Buck v; Bell majority decision (8-1). Note the key connection to compulsory vaccination. During the height of the Covid scare Corbett released his must see documentary Who Is Bill Gates? See especially Part IV,( at 1:28:30) Meet Bill Gates in which the Gates family orthodoxy of eugenics is exposed. 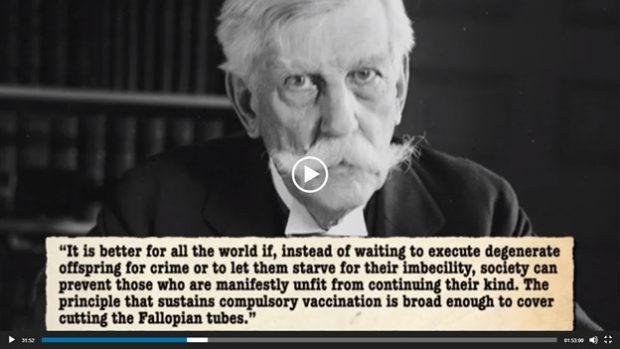 Thus, Corbett and Barnes have both pointed out that the meta narrative to explain what is going on in the Covid crazed world is a continuation of the Eugenics movement that was discredited after the horrors of Nazi Germany during WWII. That is, there is a group of sociopathic billionaires, like Gates and the Rockefellers, working to impose eugenics solutions on the world population in the name of Covid. On the strategic level of the Rockefellers, the ultimate goal is (1:38:20 in the Big Oil documentary) scientific dictatorship. My hope is that the Covid scam has demystified millions of people around the world to the true nature of how public policy is conjured up to institute population control.

A commentator on one of Barnes’ open live streams altered him to the book Eugenics and other Evils by G. K. Chesterton published in 1922.The continuity of the eugenics philosophy and modus operandi in the Covid response are evident in Chesterton’s treatment of the subject. I list below several of my highlighted passages from the book.

But the criticism of Eugenics soon expanded of itself into a more general criticism of a modern craze for scientific officialism and strict social organisation.

People talk about the impatience of the populace; but sound historians know that most tyrannies have been possible because men moved too late. It is often essential to resist a tyranny before it exists. It is no answer to say, with a distant optimism, that the scheme is only in the air.

I know that it means very different things to different people; but that is only because evil always takes advantage of ambiguity.

…know that it numbers many disciples whose intentions are entirely innocent and humane; and who would be sincerely astonished at my describing it as I do. But that is only because evil always wins through the strength of its splendid dupes; and there has in all ages been a disastrous alliance between abnormal innocence and abnormal sin.

Dr. S.R. Steinmetz, with that creepy simplicity of mind with which the Eugenists chill the blood, remarks that “we do not yet know quite certainly” what were “the motives for the horror of” that horrible thing which is the agony of Œdipus.

This lucid politician finds an old law, let us say, about keeping lepers in quarantine. He simply alters the word “lepers” to “long-nosed people,” and says blandly that the principle is the same.

The prize specimen of them was another M.P. who defended the same Bill [to sterilize the feeble minded] as “an honest attempt” to deal with a great evil: as if one had a right to dragoon and enslave one’s fellow citizens as a kind of chemical experiment; in a state of reverent agnosticism about what would come of it. But with this fatuous notion that one can deliberately establish the Inquisition or the Terror, and then faintly trust the larger hope, I shall have to deal more seriously in a subsequent chapter.

The Eugenic State has begun. The first of the Eugenic Laws has already been adopted by the Government of this country [England]; and passed with the applause of both parties through the dominant House of Parliament. This first Eugenic Law clears the ground and may be said to proclaim negative Eugenics; but it cannot be defended, and nobody has attempted to defend it, except on the Eugenic theory. I will call it the Feeble-Minded Bill both for brevity and because the description is strictly accurate.

The same can be expressed with even more point and simplicity in the proverb that prevention is better than cure. Commenting on this, I said that it amounted to treating all people who are well as if they were ill.

The thing that really is trying to tyrannise through government is Science. The thing that really does use the secular arm is Science. And the creed that really is levying tithes and capturing schools, the creed that really is enforced by fine and imprisonment, the creed that really is proclaimed not in sermons but in statutes, and spread not by pilgrims but by policemen—that creed is the great but disputed system of thought which began with Evolution and has ended in Eugenics. Materialism is really our established Church; for the Government will really help it to persecute its heretics. Vaccination, in its hundred years of experiment, has been disputed almost as much as baptism in its approximate two thousand. But it seems quite natural to our politicians to enforce vaccination; and it would seem to them madness to enforce baptism.

They mean that the public is to be given up, not as a heathen land for conversion, but simply as a pabulum for experiment. That is the real, rude, barbaric sense behind this Eugenic legislation. The Eugenist doctors are not such fools as they look in the light of any logical inquiry about what they want. They do not know what they want, except that they want your soul and body and mine in order to find out. They are quite seriously, as they themselves might say, the first religion to be experimental instead of doctrinal. All other established Churches have been based on somebody having found the truth. This is the first Church that was ever based on not having found it.

And while I reiterate that many of its more eloquent agents are probably quite innocent instruments, there are some, even among Eugenists, who by this time know what they are doing.

I do not mean, of course, that no scientific men have rigidly tackled these, though I do not recall any cases. But I am not talking of the merits of individual men of science, but of the push and power behind this movement, the thing that is able to make it fashionable and politically important.

People can certainly spoil their health with tea or with tobacco or with twenty other things. And there is no escape for the hygienic logician except to restrain and regulate them all. If he is to control the health of the community, he must necessarily control all the habits of all the citizens, and among the rest their habits in the matter of sex.

It is inevitable that the most private matters should be most under public coercion. This inverse variation is very important, though very little realised. If a man’s personal health is a public concern, his most private acts are more public than his most public acts. The official must deal more directly with his cleaning his teeth in the morning than with his using his tongue in the market-place. The inspector must interfere more with how he sleeps in the middle of the night than with how he works in the course of the day. The private citizen must have much less to say about his bath or his bedroom window than about his vote or his banking account.

And when health and the humours of daily life have passed into the domain of this social discipline, when it is admitted that the community must primarily control the primary habits, when all law begins, so to speak, next to the skin or nearest the vitals—then indeed it will appear absurd that marriage and maternity should not be similarly ordered. Then indeed it will seem to be illogical, and it will be illogical, that love should be free when life has lost its freedom.

As a man can find one jailer more lax than another, so he could find one employer more kind than another; he has at least a choice of tyrants. In the other case he finds the same tyrant at every turn. Mr. Shaw and other rational Socialists have agreed that the State would be in practice government by a small group. Any independent man who disliked that group would find his foe waiting for him at the end of every road.

Another form of the intervention, and one already mentioned, is the kidnapping of children upon the most fantastic excuses of sham psychology