An independent British scholar, J. Thomas Looney, wrote “Shakespeare” Identified. It was published in 1920 and started a Shakespeare revolution.

Looney searched for poets who wrote poems in stanzas Shakespeare used in his first published work, Venus and Adonis, where each stanza of this narrative poem has six lines, in an ABABCC rhyming pattern, each with 5 beats—10 syllables—per line. Studying an anthology of 16th century poetry, he found only one poem written that way, by Edward de Vere (1550-1604), the 17th Earl of Oxford, and the highest-ranking Earl in Queen Elizabeth’s court.

Looney then put together a list of 18 characteristics the author Shakespeare would have possessed. He would most likely be a member of the aristocracy, since a king, emperor, prince, or duke is one of the main characters in 34 of his 37 plays. Another is that Shakespeare loved Italy because he sets 13 of his plays in Italy; and Edward de Vere toured Italy, spoke Italian, and lived for a time in Venice. The Stratford “Shakespeare,” christened Gulielmus (William) Shaksper, did not meet any of these 18 characteristics. Scholar Warren Hope put it this way: “Looney’s work renders a world figure [the Stratford “Shakespeare”] a nonentity and transforms a forgotten courtier [Queen Elizabeth I’s Earl of Oxford] into a leading light of humanity’s intellectual life.” 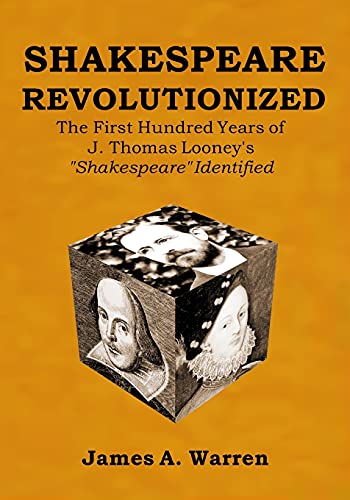 Now we have Shakespeare Revolutionized: The First Hundred Years of J. Thomas Looney’s “Shakespeare” Identified, by James A. Warren. This 763-page book finally settles, beyond a reasonable doubt, the contentious Shakespeare authorship question.

The book is divided into three parts: Part One, “The First Decades of “Shakespeare” Identified,” in 5 Sections up to 1948 (pages 29-488). Part Two, “The Continuing Influence of “Shakespeare” Identified,” in 2 Sections, titled, “The Oxfordian Movement Today” and “The Stratfordian Response Today” (pages 489-628). And Part Three, “Prospects for the Oxfordian Idea,” with “Assessments and Outlook,” and chapters titled “Looney, Oxford, and Why It Matters” and “Completing the Oxford Revolution.” There is a 45-page Bibliography, detailed Index, and a final page about the author.

James Warren spent 20 years as a Foreign Service officer with the U.S. Department of State. He has written several books dealing with the Shakespeare authorship question, which include a new edition of “Shakespeare” Identified, where Warren adds explanatory footnotes to it, and four editions of An Index to Oxfordian Publications, plus Summer Storm: A Novel of Ideas, with an Oxfordian theme.

The thoroughness with which James Warren has researched the 100-year post-Looney Oxfordian history is extraordinary. One example: Katherine Eggar (1874-1961), a noted pianist and composer corresponded extensively with J. Thomas Looney and served on the Executive Committee of the Shakespeare Fellowship from 1926-1936. The author learned that her papers are housed in the Katherine D. Eggar Archive, Senate House Library, University of London, which he visited. Warren writes: “Eggar went on to publish several pamphlets and two dozen articles on Oxfordian topics. She gave dozens of public lectures, most of which weren’t published. She spent decades writing a biography of Edward de Vere that was left unpublished at the time of her death [92] (p. 199).” The on-page footnote 92 reads: “The archives contain multiple drafts of the chapters of the book, with what appears to be the final draft of each chapter stored in the last two of the twenty-eight boxes.”

One can just picture this determined author meticulously going through those 28 boxes of papers left by a little-known first-generation Oxfordian housed in an obscure Senate House library in the UK. 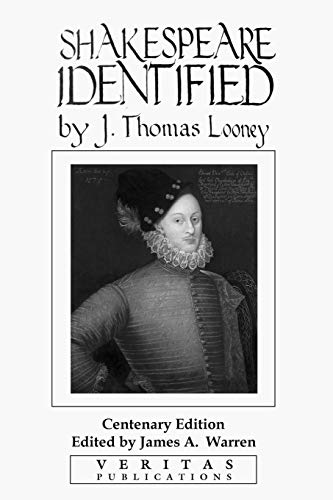 There are 1,565 footnotes averaging close to three per page, which contain references, explanations, and comments like the one above. Periodic comments in the footnotes add spice to the text. Paragraphs are a pleasant size and not suffocatingly long as is often the case with scholarly works like this. As one Amazon reviewer puts it, “Its lucid style makes the dramatic history of the authorship controversy informative and entertaining.”

The book has “Biographical Text Boxes” of 22 prominent early Oxfordians in the UK and U.S., giving their age in 1920. Percy Allen (1782-1959), drama Critic for The Christian Science Monitor, was a leading protagonist of the Oxfordian cause. In Manifesto of Conversion , Allen writes (p. 205):

“About 1925 [6], my attention was called to Mr. J.T. Looney’s book, “Shakespeare” Identified, which seeks to shew that Edward de Vere was, in fact, the author of the works usually attributed to William Shakespeare. That book I read, with some care; and though unwilling, at the finish, to admit that its author’s case was fully established, I could not withhold assent from his proposition that Lord Oxford was, in some ways, intimately connected with the Shakespearean plays; and that he provided, almost beyond question, Shakespeare’s historic original for the Prince of Denmark [Hamlet], as also for Bertram in All’s Well that Ends Well. [7]”

“Shaksper of Stratford had neither the education nor the knowledge of foreign countries and languages and aristocratic cultured life, to make it possible for him to have written the ‘Shakespeare’ plays and sonnets.”

And Charles Wisner Barrell (1885-1974), Cofounder of the American branch of the Shakespeare Fellowship, in The Saturday Review of Literature wrote (p.415):

“There is no record of his [Shakspere] having had any formal education whatever or any of the broadening influence of foreign travel. He left no books, letters, or manuscripts, not a scrap of paper to prove that he was personally able to construct one grammatical sentence. The entire extent of his manuscript bequest to humanity consists of six wretchedly scrawled signatures, spelled in four different ways.”

In Shakespeare Revolutionized Warren compiles a list of 34 academic Shakespeare scholars who ignored Looney’s “Shakespeare” Identified when it was published (p. 295); and he lists another 18 who responded to it, all negatively (p. 297). This has continued to be the case over the last hundred years. Warren writes (p.306):

“Academic reluctance to tackle topics that might touch on the authorship question inhibited scholarly work. The puzzling unauthorized publication of the Sonnets in 1609 was glossed over. No mention was made of the absence of any known connection between the First Folio [published in 1623, seven years after the Stratford man died] and Shakspere‘s family in Stratford. Nor was there any acknowledgment that the powerful men behind the publication of the First Folio were a son-in-law of Oxford and his brother, who had at one time been engaged to another of Oxford’s daughters [the First Folio is dedicated to them].”

Warren identifies 30 “Works by Orthodox Scholars Published After 1920 that Undercut [unintentionally] the Stratfordian Claim” (p. 334). Among them: The Elizabethan Stage (1923) by Sir Edmund K Chambers, Works by Shakespeare (1927) by Sir Henry Irving, and Shakespeare’s Imagery, and What It Tells Us (1935) by Caroline Spurgeon.

In a chapter titled “Two Issues Looney Didn’t Address: Why and How” (p.263), Warren writes:

“When reporting the news, journalists have traditionally sought to answer six questions—who, what, when, where and why—and one “H” question—how. In “Shakespeare” Identified, J. Thomas Looney provided clear answers to the first four: Who—Edward de Vere; What—Authorship of the plays and poems traditionally attributed to William Shakespeare: When—Written more than a decade earlier than had been thought, between the 1570s and 1604, not between 1592 and 1611; Where—Written for performances at court and in private theaters; only later performed on the public stage.

But he did not provide fully convincing answers to the “why” and “how” questions: why Oxford hid his authorship and how the process of hiding it could have succeeded for his lifetime (and for centuries thereafter).”

The Dynastic Succession Theory (aka Prince Tudor Theory, Tudor Heir Theory) answers the “why” and “how” questions. Warren deals carefully with it. The theory hypothesizes that Henry Wriothesley, Earl of Southampton, and the Fair Youth in the Sonnets, was Queen Elizabeth’s son by Edward de Vere. Born secretly in 1574, he was farmed out and raised to become the 3rd Earl of Southampton. For several reasons related to this regal birth, Oxford was obliged to write his poems and plays anonymously, under the pseudonym “William Shakespeare,” or, half the time, “Shake-speare.” Three things interacted: The Essex Rebellion, with Southampton second in command; Robert Cecil, the Queen’s Lord Privy Seal and Secretary of State, the most powerful politician in the kingdom who had it in for Oxford; and Henry Wriothesley, Elizabeth’s son, and natural Tudor heir to the throne rendering him a threat to the newly crowned Stuart King James I. These factors all played an interactive role in compelling Oxford to pick anonymity.

In a chapter titled “Stratfordian Scholars Embarrass Themselves,” Warren makes the case that not much has changed with academia today vs. 1940. He knocks the “efforts to create a believable Shakspere story line through two dozen recent biographies even though no new facts about William Shakspere have been discovered since 1931. These books have shown that it cannot be done without resorting to fantasy and fiction, the presentation of supposition as fact and the selective omission of material facts.” (p. 623)

Instead, “Modern Shakespeare studies should begin with “Shakespeare” Identified. That book was as revolutionary in its field in 1920 as Darwin’s The Origin of Species was in biology in 1859.”

Over the last four centuries there have been three key years with Shakespeare: in 1623, when the First Folio was published with 18 of its 36 Shakespeare plays seeing print for the first time; 1920, when J. Thomas Looney’s “Shakespeare” Identified discovers the canon’s true author; and 2005, The Monument by Hank Whittemore is published. It shows the Sonnets are, in fact, a “dynastic diary” that reveals the “how” and “why” Edward de Ver hid his authorship of the Shakespeare canon. The fourth key year will come when the Shakespeare Revolution is completed, and the academic Shakespeare establishment finally surrenders and accepts Edward de Vere as the true author of the Shakespeare canon. James Warren’s Shakespeare Revolutionized is going to play a key role in bringing this about.

For readers new to the Shakespeare authorship question a good place to start is with Shakespeare: Who Was He? The Oxford Challenge to the Bard of Avon (1994), 178 pages. James Warren notes that this was the first Oxfordian book he read and that it largely transformed him into an Oxfordian. The same thing happened with me, too.

Then consider reading The Mysterious William Shakespeare by Charlton Ogburn (Jr.), the 1992 Second Edition, 875 pages. Warren credits this book for rejuvenating the Oxfordian movement leading into this century.

Five U.S. Supreme Court Justices have expressed their conviction that William Shakspere did not write the works attributed to him; three have publicly stated their belief that Oxford wrote “Shakespeare’s” works.

The Richest And Most War-Mongering Nation on Earth Is Still Addicted To Bombing Poor, Defenseless NationsA Tonkin Gulf Incident in the Gulf of Oman?