The Propaganda War (And How to Fight It)

Every totalitarian system in history has used the power of visual propaganda to generate a new “reality,” one that reifies its official ideology, remaking the world in its own paranoid image.

New Normal totalitarianism is no exception.

For example, take a look at this panel copied from the landing page of The Guardian — one of the global-capitalist ruling classes’ primary propaganda organs — on July 17, 2021… 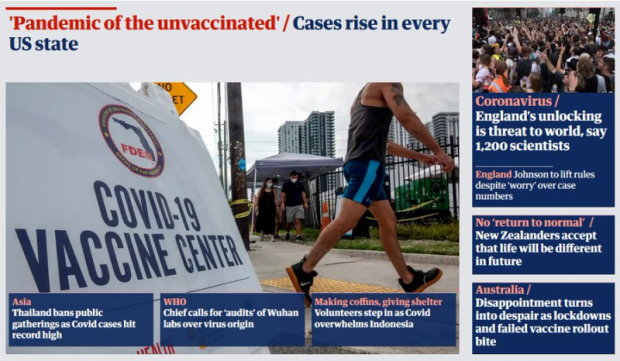 This isn’t just “biased” or “sensationalist” journalism. It is systematic official propaganda, no different than that disseminated by every other totalitarian system throughout history. Here’s the one from the following day… 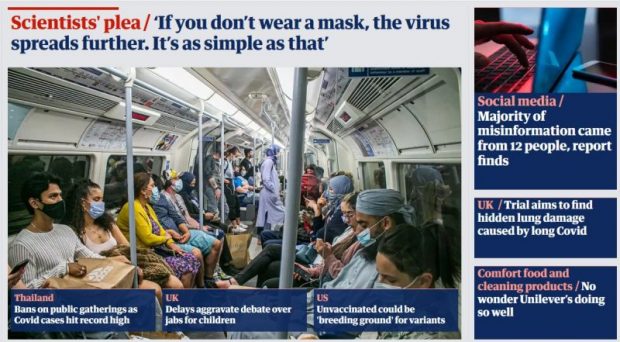 Forget about the content of the articles for a moment and just take in the cumulative visual effect. Official propaganda isn’t just information, misinformation, and disinformation. It is actually less about getting us to believe things than it is about creating an official reality, and imposing it on society by force.

When you’re setting out to conjure up a new “reality,” images are extremely powerful tools, just as powerful, if not more powerful, than words.

Again, the goal of this type of propaganda is not simply to deceive or terrorize the public. That is part of it, of course, but the more important part is forcing people to look at these images, over and over, hour after hour, day after day, at home, at work, on the streets, on television, on the Internet, everywhere.

This is how we create “reality.” We represent our beliefs and values to ourselves, and to each other, with images, words, rituals, and other symbols and social behaviors. Essentially, we conjure our “reality” into being like actors rehearsing and performing a play … the more we all believe it, the more convincing it is.

This is also why mandatory masks have been essential to the roll-out of the New Normal ideology. Forcing the masses to wear medical-looking masks in public was a propaganda masterstoke.

Simply put, if you can force people to dress up like they’re going to work in the infectious disease ward of a hospital every day for 17 months … presto! You’ve got yourself a new “reality” … a new, pathologized-totalitarian “reality,” a paranoid-psychotic, cult-like “reality” in which formerly semi-rational people have been reduced to nonsense-babbling lackeys who are afraid to go outside without permission from “the authorities,” and are injecting their children with experimental “vaccines.”

The sheer power of the visual image of those masks, and being forced to repeat the ritual behavior of putting them on, has been nearly irresistible. Yes, I know that you have been resisting. So have I. But we are the minority. Denying the power of what we are up against might make you feel better, but it will get us nowhere, or, in any event, nowhere good.

The fact is, the vast majority of the public — except for people in Sweden, Florida, and assorted other officially non-existent places — have been robotically performing this theatrical ritual, and harassing those who refuse to do so, and thus collectively simulating an “apocalyptic plague.”

Portrait of an Evil Man: Karl MarxThe Death Knell for Relying on the PCR Test for Covid Statistics