Baselessly accusing people of being Russian agents and weaponizing accusations of sexual misconduct are reputation-destroying cancers at the heart of liberal discourse.

An incredibly vicious and protracted war is being waged, seemingly with no end in sight, among numerous prominent liberal and left-wing commentators who work primarily on YouTube. The conflict erupted on May 26 when Cenk Uygur — the founder and long-time host of The Young Turks, the largest liberal-left YouTube platform — baselessly and falsely accused independent journalist Aaron Maté of being “paid by the Russians,” while his co-host, Ana Kasparian, spouted innuendo that Maté was “working for” unnamed dictators.

Maté is one of the very few left-wing journalists who reported skeptically on Russiagate and who questioned the U.S. Government’s narrative about the civil war in Syria, including by traveling to war-torn parts of that country to do so. He won the 2019 Park Center for Independent Media’s Izzy Award for his work debunking Russiagate. Yet with a one-minute rant from their insulated studio, Uygur baselessly branded Maté as someone who is “paid by the Russians” while Kasparian asserted that he “seemed” to be working for Assad and other dictators — a potentially reputation-destroying smear for a journalist and one that can be quite dangerous for a reporter who, like Maté, works on the ground in war zones.

The conflict engendered by those grotesque fabrications escalated significantly when Kasparian sent a private Twitter message to one of Maté’s defenders, Jimmy Dore, in which she threatened to accuse Dore of #MeToo-type sexual harassment from when they worked together seven years earlier. Kasparian made clear that her intent to publicly vilify Dore as a sexual harasser would serve as punishment for his criticisms of The Young Turks. Dore then revealed Kasparian’s threat on his program, and days later, Kasparian made good on her threat by accusing Dore of sexual harassment back in 2014. 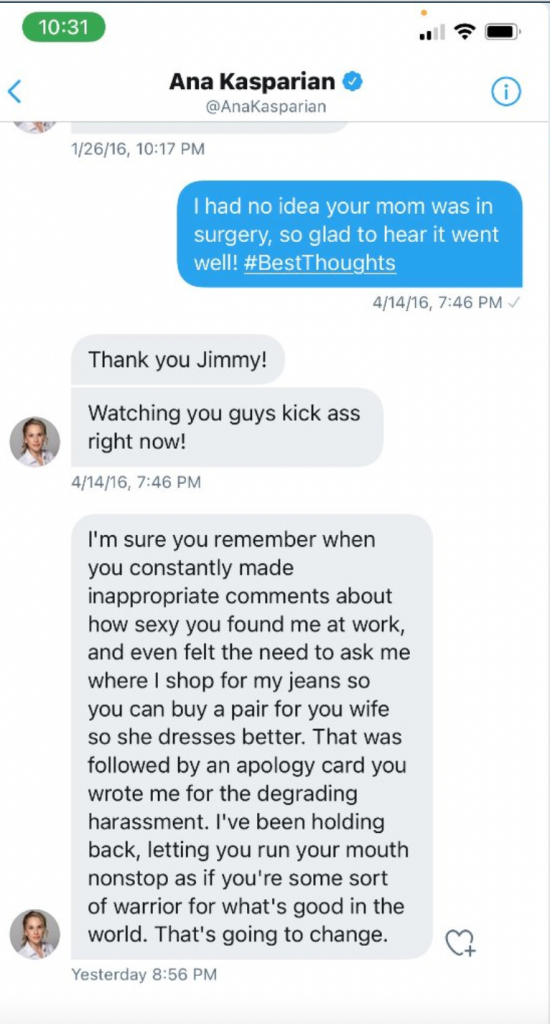 While I used my social media platforms to denounce the false accusations voiced by Uygur and Kasparian against Maté, none of this would merit an article or stand-alone commentary if not for the fact that the two weapons they chose — false accusations that someone is a paid Russian agent and exploited sexual harassment accusations — have become extremely commonplace in Democratic Party politics, liberal circles and U.S. politics more broadly. It is long past time — way past time — that these tactics be rejected and scorned by everyone regardless of ideology or personality preferences.