The Latest Lie from on-High: An “Independent Federal Reserve”

Earlier in July, U.S. President Biden came away from a meeting with Fed Chairman Jerome Powell and calmly announced that in addition to inflation being “short term,” we should fear not, as Biden also “made it clear to Chairman Powell that the Fed remains independent,” but “will act as needed.”

Whewwww. Where to even begin in unpacking the lighthouse of reality behind so much verbal fog?

When it comes to market analysis, no one wants to hear political opinions within finance reports, left or right.

Thus, rather than run the risk of offending the left, right or center, I’ll be frank in confessing my foundational view that nearly all politico’s (and Fed Chairs) have been universally comical when it comes to math, history or blunt-speak.

In short, the math, facts and warning signs rising by the hour (and outlined below) make it easy to be an equal-opportunity cynic when it comes to fiscal leadership or political “truth.”

So, let’s get back to Biden’s recent observations…

As for inflation being “short-term,” we’ve written ad nauseum about our stance on this fiction many times elsewhere.

But as for Biden’s declaration about the Fed being “independent,” let me wipe the coffee I just spilled on my shirt and speak plainly: That’s a lie.

First of all, if the Fed were as “independent” as Biden claims, then how can Biden be so certain they “will act as needed”?

Aren’t “independent” actors supposed to act as they, rather than the politicians, decide or “need”?

And if an otherwise unconstitutional Fed, which sits on Constitution Ave behind marble columns screaming of a governmental architectural façade were truly an independent “private bank,” then why does it call itself a “Federal” Reserve?

Furthermore, for any who have taken the time to read the actual (as well as sordid) history of the Fed’s not-so-immaculate conception (as uniquely outlined in Ed Griffin’s seminal work, The Creature from Jekyll Island), they already know that the Fed is as tied to the hip of Wall Street money and D.C. politics as an anchor is to a rotting ship.

Finally, and most importantly, if the Fed were truly “independent,” then why has it been buying the near entirety of Uncle Sam’s IOUs (Treasury bonds) for the last 18 months at negative real interest rates? 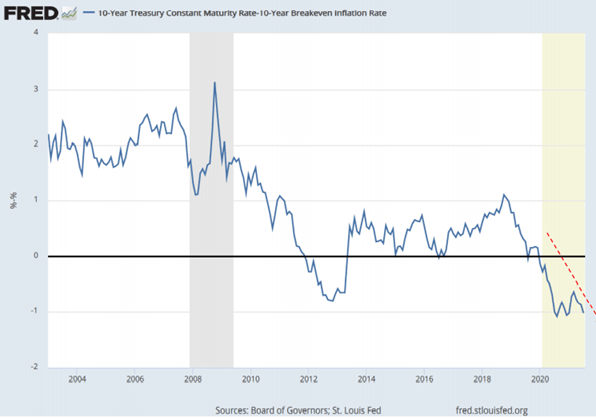 Needless to say, Biden has publicly offered Jerome Powell “broad support” for another Fed term for one simple reason: The Biden Administration, like every administration since Eisenhower, wants a dependable rather than independent Federal reserve.

In other words, in a nation 1) whose manufacturing has been offshored, 2) whose workers are increasingly unemployed or on the dole, 3) whose feudalistic top 10% have disconnected entirely from the bottom 90%, and 4) whose entirely Fed-supported (and sky-rocketing) securities bubble is now the only reliable source of capital gains tax receipts allowing the U.S. to pay its interest expense on governmental debt… it’s actually quite easy to see that the Fed is anything but independent of D.C. politics.

To the contrary, the Fed is now, and has been evolving for years, as not only the lender of last resort for America, but the “solution” of last resort in pretending that a debt-soaked nation can survive off more debt.

Sadly, Thomas Jefferson, Andrew Jackson and many others had warned us long ago that such a toxic “solution” was nothing more than the undoing of our system, not its salvation.

“I sincerely believe that banking establishments [like a private central bank] are more dangerous than standing armies, and that the principle of spending money to be paid by posterity under the name of funding is but swindling futurity on a large scale.”

“A U.S. central bank would represent the prostitution of our government for the advancement of the few at the expense of the many.”

Following the Bread Crumbs to “What’s Next”

So, there you have it. A few little reminders from history, securities bubbles and tax receipts of what I think about Presidential truth in general or Biden’s “independent Federal Reserve” meme in particular.

But for those thinking about currencies and markets, let me get less political and even more blunt: The blatant dishonesty, desperation and open absurdity of such financial leadership makes it far easier for informed investors to behave and prepare for a future laid out to us by the so-called experts.

Let’s just follow the bread crumbs (i.e., data and math) and see where they always lead.

It’s no great mystery to political administrations addicted to Fed money that they will be asking for even more of it: 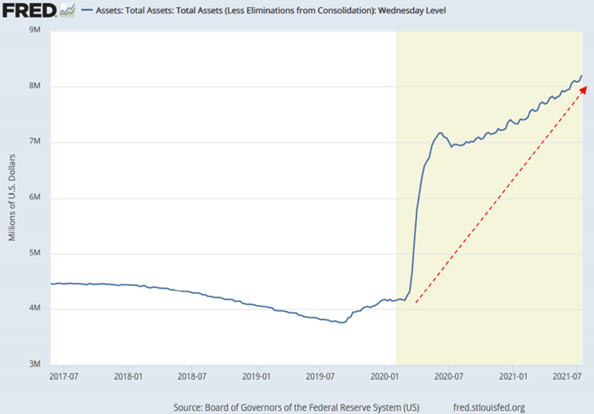 And it’s no great mystery that Federal deficits like this… 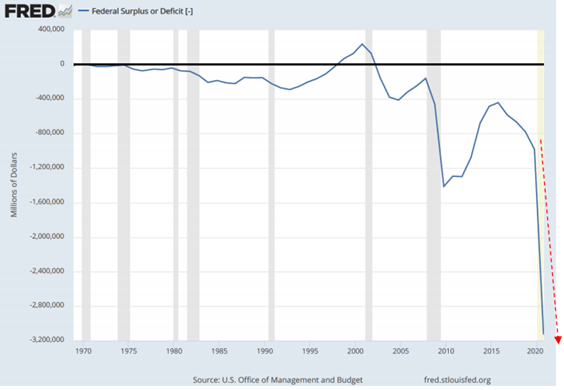 … will be ignored by the Don Lemon-like “journalists” of the world throwing soft-ball questions to soft-brained politicos like Biden, all of whom promise more free money to the legitimately downtrodden masses like this… 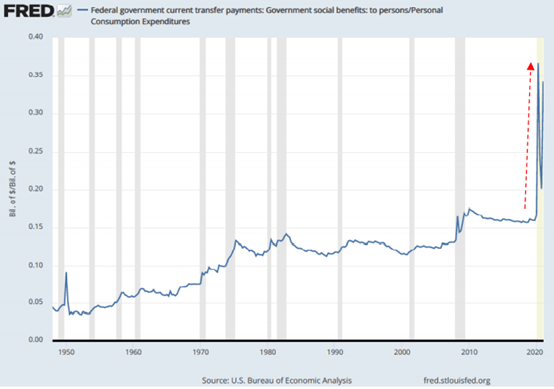 …in order to get or stay elected.

But expanding the money supply at astronomical levels like this…

…doesn’t help those same Wall Street-ignored and increasingly angry masses for long, as the invisible tax of inflation eats away at the dollars they earn, collect or try to save at negative rates of return.

Don’t Get Jabbed: Powerful Video on “Killer Vaccine” That Needs To Be Watched by Everyone The US Housing Bubble Visualized