Were the Experimental Covid Shots a Factor in singer B.J. Thomas’s Death?

What role, if any, did the experimental Covid shots have in the death of singer B.J. Thomas? The popular five time Grammy Award winning pop, country and gospel vocal stylist and 2014 Grammy Hall of Fame inductee passed away at the age of 78 on May 29. The official cause of death was complications from lung cancer (Thomas reportedly stopped smoking in 1988). Fans who are aware the singer stated he was injected with at least one – and possibly two – of the shots; are informed about the deaths resulting from the genetic modifying jabs, especially among the elderly; and know doctors and scientists have linked the mRNA technology in the shots with cancer will always wonder what role, if any, the jabs had in his death. 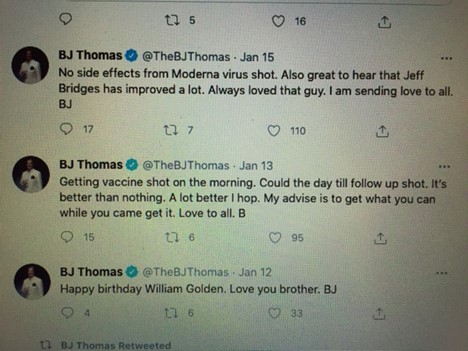 On January 13, Thomas announced on Twitter: “Getting the shot in the morning.” Then “Could the day till the follow up.” Not sure what that means, but he didn’t sound too enthusiastic: “It’s better than nothing. A lot better I hope. My advice is to get what you can while you can get it.” He tweeted on January 15: “No side effects from Moderna virus shot.” Hank Aaron had publicly been injected on camera and passed away 17 days later. Robert F. Kennedy, Jr., chairman of the activist group Children’s Health Defense, stated, “Hank Aaron’s tragic death is part of a wave of suspicious deaths among elderly closely following administration of Covid vaccines. The baseball legend received the Moderna vaccine on January 5, in an attempt to inspire other Black Americans to step up to the plate and get the vaccine.” On January 22, Thomas tweeted “RIP Hank Aaron.” Two days later a fan tweeted Thomas a warning: “Experimental ‘vaccines’ aren’t safe. There are safer treatments. The transhumanist agenda is using DNA-altering gene therapy to destroy our God-given immune system. Hank passed right after he took the 2nd Covid shot. For more information, check out…” and the fan provided the Twitter addresses of Drs. Joseph Mercola, Sherri Tenpenny, Rashid Buttar, Shiva Ayyadurai, Simone Gold, Carrie Madej, and Andrew Kaufman, as well as the CHD, Del Bigtree’s High Wire and the National Vaccine Information Center. That day Thomas responded: “Thank you for info. Sorry for Mr. Aaron’s family. Yes, a lot of misinformation about vaccine. I’m afraid the virus is here to stay.”

These vaccine sources have all faced censorship because they warned the shots are experimental, anyone getting them are part of the third clinical trial, and long-term safety data is non-existent. CHD monitors the latest reports, deaths (4.406), and injuries from the federal government’s Vaccine Adverse Events Reporting System (VAERS). Studies from Harvard and others estimate about 1% of actual events are reported.

According to the CDC, the Moderna shot schedule advised getting the second jab 28 days or four weeks after the first injection:

Thomas would have gotten his second shot on February 11, although he did not announce it on Twitter. Then he shocked his fans on March 23 by tweeting he had been diagnosed with stage four lung cancer. He wrote he was receiving treatment at a local health care facility in Texas and was hopeful for a full recovery.

Some doctors and scientists believe there is a possible link between mRNA, the technology used in the Covid shots, and cancer.

Clinical research by molecular biologists at the Sloan-Kettering Institute discovered mRNA inactivates tumor-suppressing proteins, which means it can cause cancer. The information carrying molecule can instruct cells as cancer drivers. RNA is transported out of the cell’s nucleus and will no longer function properly as a cancer tumor suppressor. mRNA changes are linked to blood, acute lymphatic and breast cancer.

Women recently injected with the shots are showing symptoms of breast cancer.

Is the timing of the shot(s) with Thomas’ cancer diagnosis and death coincidental or is there any cause and effect? Some fans will always wonder. Thankfully, they will always be able to enjoy his timeless music.

Thomas sold 70 million pop, country and gospel records and enjoyed eight #1 hits and 16 top 10 singles. His biggest hit was 1970’s “Raindrops Keep Falling on My Head” from the film soundtrack “Butch Cassidy and the Sundance Kid.” It won Burt Bacharach and Hal David the Academy Award for Best Song. Other Thomas hits included “Hooked on a Feeling,” “I Just Can’t Help Believing” and “Somebody Done Somebody Wrong Song.” Until the end of his life Thomas could still sing at a level that pleased him and his fans. He continued to perform live concerts until the 2020 Covid lockdowns and was booked through 2021 planning to tour with former Supreme Mary Wilson. During the past year, he posted online performances and did interviews. Thomas attributed his recovery from alcohol and drug addiction in the 1970s to his newfound Christian faith and his wife Gloria. It was love at first sight in 1967 when he met the woman he affectionately called the Redhead. His marriage to the songwriter lasted 53 years, they were parents to three children and had four grandchildren.

He’s home where he belongs now.

Another Bacharach-David song, “Long Ago Tomorrow” (1972):

“Another Somebody Done Somebody Wrong Song” (1975):

Singing “Rock and Roll Lullaby” in 1983 at Austin City Limits:

“As Long As We Got Each Other” (TV Show Growing Pains theme song) performed in 2009:

Thomas was named one of Billboard’s 50 Most Played Artists of the Last 50 Years.