By Larry Hamlin
Watts Up With That?

The June 23, 1988 Democratic Senate Committee on Energy and Natural Resources hearing opened the door on climate alarmism in the nation with testimony from scientific “experts” and Committee Senators who offered speculation and conjecture on a host of weather and climate topics while sharing their scientifically unsupported and sensationalized doomsday perspectives. The complete record of the hearing’s proceedings can be found here.

This hearing is often celebrated by climate alarmists and cited as a milestone in establishing the alleged legitimacy of greenhouse gas emissions as the principal cause of increased global warming that also drives other global climate conditions. The hearing was front page headline news in the New York Times. 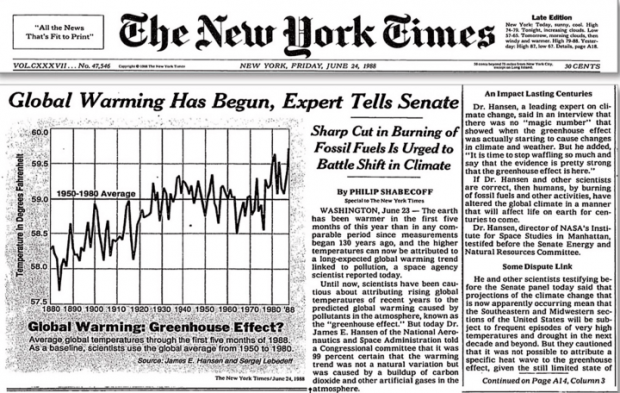 In reality the hearing’s climate alarmist statements and claims represented nothing but conjecture and speculation driven by the political ambitions of politicians and scientists seeking fame and additional government funding. The hearing failed to address scientifically proven and verifiable climate evidence.

For more than three decades since this hearing the Democratic Party has continued to engage in scientifically unsupported climate alarmism and relied instead upon conjecture, speculation and exaggeration while concealing the failure of climate model projections and more importantly the UN IPCC acknowledgment that climate models cannot provide accurate assessments of future climate states.

A detailed review of the statements and claims made by both the Senators and scientific “experts” presenting greenhouse gas and global warming information at the hearing when viewed in 2021 after 33 years of recorded climate data reveals how extraordinary flawed and mistaken the hearings proceedings were with the numerous failed claims being completely ignored by the main-stream media that continues to celebrate the climate alarmism symbolism of this hugely inaccurate and misleading hearing.

The incredibly flawed perspectives of this hearing rather than being celebrated as a major milestone of climate alarmism success instead represent everything that is wrong about climate alarmism’s use of politically motivated and contrived speculation, conjecture, exaggeration, distortion, and deception in making scientifically unsupported claims in addressing climate issues.

The hearing was held in the Senate Dirksen Office Building in Washington D.C. on a hot 101 Degree F day during an unseasonably warm heat wave (the highest temperature on record in Washington D.C. occurred on July 29, 1930 at 106 degrees F some 91 years ago) along with a major drought also underway in the Midwest and Southeastern regions of the country. 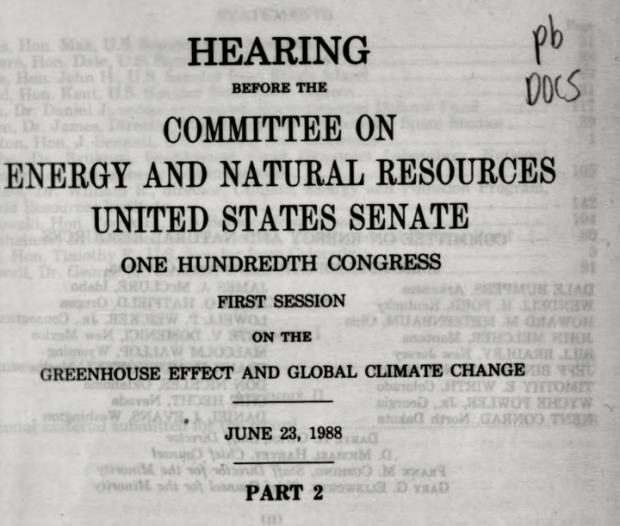 The hearing was Chaired by Democratic Senator Bennett Johnston of Louisiana whose opening statement introduced the primary hearing topics to be addressed which were the greenhouse effect and global warming and their impact on global climate.