YouTube, the dominant video platform owned by Google, decided yesterday to remove a Mises Institute video. This decision apparently lasts for all eternity, cannot be appealed to an actual human, and comes with this friendly admonition: “Because it’s the first time, this is just a warning. If it happens again, your channel will get a strike and you won’t be able to do things like upload, post, or live stream for 1 week.”

The video, a talk by Tom Woods titled “The Covid Cult” with more than 1.5 million views, was recorded at our live event in Texas two weeks ago. It offered challenges to the official narrative surrounding the coronavirus, particularly with respect to mask mandates. Woods’s talk featured several charts showing rises in Covid “cases” across multiple cities and countries not long after imposing mask rules, demonstrating how such rules apparently have little effect on slowing transmission of the virus. 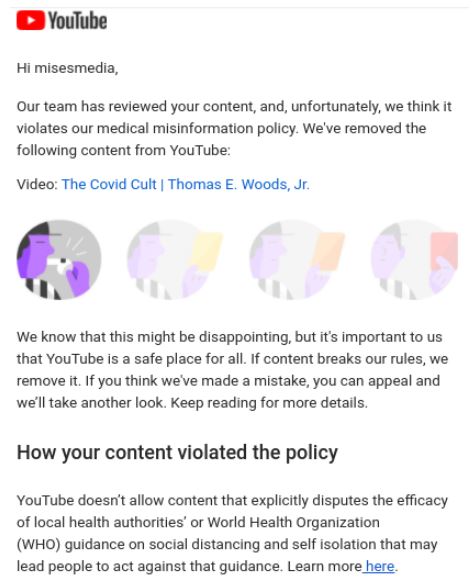 The speech was nothing less than a heartfelt tour de force against the terrible lockdowns and pseudoscience plaguing the debate over Covid, and a call to reexamine tradeoffs and priorities. It was, as you might imagine, a mix of unassailable data combined with our friend Tom’s strong prescription for liberty and personal choice rather than centralized state edicts.

In other words, YouTube had no earthly business removing it. This kind of discourse seems to me the best and highest use for YouTube, it’s most important function.

“Big Digital,” as Professor Michael Rectenwald terms tech companies, have become “governmentalities”: supposedly private enterprises turned into instruments of state power and state narratives. This sordid process is different for each company, (some are more complicit than others, a few are heroically non-compliant) but it involves a mix of early start-up funding; connections and contracts with state agencies, particularly relating to defense and surveillance; and propaganda campaigns in service of state narratives. Rectenwald explains this phenomenon in his own recent talk titled “The Google Election“:

In short, Google, Facebook and others are not strictly private sector entities; they are governmentalities in the sense that I have given to the term. They are extensions and apparatuses of the state. Furthermore, these platforms are governmentalities with a particular interest in the growth and extension of governmentality itself. This includes championing every kind of “subordinated” and newly created identity class that they can find or create, because such “endangered” categories require state acknowledgement and protection. Thus, the state’s circumference continues to expand. Big Digital is partial to the interests and growth of the state. It not only does business with statists but also shares their values. This helps makes sense of its leftist bent and their preference for the deep state Democrats. Leftism is statism.

We encourage readers to consider the entirety of Rectenwald’s talk, and his sobering book Google Archipelago for his thorough treatment of the facts and realities behind tech companies and the US state. This is not alarmism or conspiracies, but documented examples of how Google, Facebook, YouTube, Twitter, Instagram, LinkedIn and others actively participate—including financially—in a melding of corporate and state power.

This, then, is real fascism. Big Digital—what writer Ilana Mercer calls “Deep Tech”— is not a collection of private companies in the sense we think of such. They are partners of the federal government, committed to ideological service as part and parcel of their own bottom line.

Thankfully,  the sneering call to “build your own platforms” is being answered. Companies like Bitchute and LBRY (its video platform is Odysee) continue to host Mises Institute content, and promise to continue doing so. In fact, you can view Dr. Woods’s forbidden talk at those respective source here and here.

Truth tellers matter more than ever. It’s time for our own institutions and platforms, which is precisely why the Mises Institute exists.