October 2, 2020, President Donald Trump announced he and First Lady Melania Trump had tested positive for SARS-CoV-2. Both reported having mild symptoms. According to a report1 by Science Magazine, the President was transferred to Walter Reed National Military Medical Center in Bethesda, Maryland, that same day. His symptoms included fever, fatigue and congestion.

According to his doctors, he also experienced a temporary drop in oxygen saturation level, from the normal 98% to 93%, and was given supplemental oxygen before being transported to Walter Reed.2 As a general guideline, medical care is recommended if your oxygen saturation is below 94%.3

Melania Trump opted to rest and self-isolate in the White House.4 Her symptoms, which were reportedly milder than the president’s, included mild cough and headache. No news has emerged regarding her course of treatment. 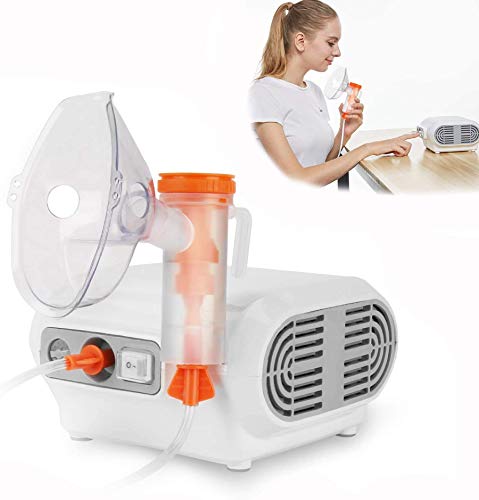 According to reports, President Trump has been given a variety of treatments, including both holistic alternatives and experimental drugs, prompting some health professionals to question why they’re “throwing the kitchen sink at him.” While aggressive and early treatment is strongly recommended, certain remedies are best used at specific times during the disease process.

Peak viral replication takes place at the earliest signs of symptoms, which include cold/flu-like symptoms, loss of taste and smell, myalgia (muscle pain) and general malaise. At this time, the focus should be on antiviral therapies. Anti-inflammatories (which is what steroids are) should be avoided, as you don’t want to dampen your immune system at this stage.

During the second phase, hyperinflammatory immune responses become apparent. At this stage, the FLCCC’s MATH+ protocol, which has been delivered to the White House on at least four occasions, calls for the administration of intravenous (IV) methylprednisolone (a steroid) to suppress the immune system and dampen cytokine storm, IV ascorbic acid (vitamin C) and subcutaneous heparin to prevent blood clots.

Optional additions include thiamine, zinc, vitamin D, magnesium and famotidine. In addition to these medications, the protocol calls for high-flow nasal oxygen to avoid mechanical ventilation.

Together, this approach addresses the three core pathological processes seen in COVID-19, namely hyperinflammation, hypercoagulability of the blood, and hypoxia (shortness of breath due to low oxygenation). The graphic below details the two stages of disease, and the FLCCC’s suggested treatment focus for each. 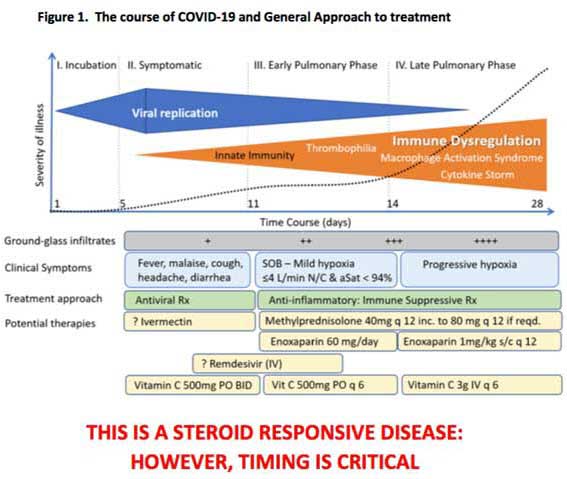 The President’s treatment protocol has reportedly included the following.6,7,8,9,10 As you can see, while there are certain similarities to the MATH+ protocol, there are also distinct differences:

Remdesivir is an experimental antiviral drug from Gilead Sciences that has been granted emergency authorization by the U.S. Food and Drug Administration. The IV drug, which is supposed to be used for late-stage severe COVID-19 infection, has been shown to cause severe side effects in 60% of patients, and doesn’t reduce the death rate. It merely reduces the recovery rate by an average of 31%, or four days.11

REGN-COV2 is an experimental monoclonal antibody cocktail made by Regeneron that has been described12 as “genetically engineered plasma” and a “passive vaccine.” The president apparently received an 8-gram infusion, which is a considerably larger dose than the 2.4-gram dose shown to reduce SARS-CoV-2 levels.

According to George Yancopoulos, co-founder and chief scientific officer of Regeneron, maker of REGN-COV2, the larger dose was likely given out of “an abundance of caution,” as the company’s data suggests higher doses may be more effective in lowering the viral load and may provide longer lasting effects while having “very, very limited risk.”13

Dexamethasone, a steroid used to prevent immune system overreaction. Some doctors question14 the use of this drug, as it’s typically been reserved for patients with late stage disease. On the other hand, the FLCCC has noted that dexamethasone is a less effective option than the methylprednisolone recommended in the MATH+ protocol.15

Zinc — As explained in “Swiss Protocol for COVID — Quercetin and Zinc” and “Zinc Is Key to HCQ Protocol,” zinc plays a crucial role in immunity and blood clotting, and effectively inhibits viral replication. Unfortunately, zinc is poorly absorbed, which appears to be why protocols using it together with zinc ionophores such as quercetin or hydroxychloroquine, which usher zinc into your cells, are so effective.

Famotidine (brand name Pepcid), an antacid drug included as an optional addition in the MATH+ protocol,16 has antiviral properties and stimulates the immune cells of your innate and adaptive immune system. In one COVID-19 study, famotidine given within 24 hours of hospital admission was found to reduce the risk for death and intubation.17

Melatonin — As detailed in “Melatonin for Sepsis,” melatonin plays an important role in your immune function, has antioxidant and mitochondrial-protective functions, and has been shown to be effective against various bacterial and viral infections.

It’s also been shown to reverse septic shock symptoms by decreasing synthesis of proinflammatory cytokines and preventing oxidative damage, endotoxemia and metabolic alterations. The potential role of melatonin in COVID-19 infection has been addressed in an extensive and fully referenced March 14, 2020, article by medical researcher Doris Loh, published in the Italian online magazine Evolutamente.18

Is the President Being Overtreated?

As mentioned, some health practitioners have questioned whether the President might be receiving excessive care. The use of the steroid dexamethasone, which would typically be reserved for severe cases, appears to rattle critics the most. Few if any have brought up the mediocre trial results of remdesivir, or the fact that this drug is also for late-stage disease.

According to the FLCCC, COVID-19 is a steroid-responsive disease, and steroids are a key component of Phase 2 treatment. That said, it may be true that Walter Reed doctors jumped the gun in prescribing these drugs if, indeed, the president only had mild symptoms. Alternatively, perhaps the president’s illness was more severe than has been reported.

The president also has some of the comorbidities or risk factors known to place him at increased risk for more severe disease, primarily age (he’s 74), excess weight and mild or moderate high blood pressure (although it’s said to be under control). He clearly suffers from insulin resistance based on his weight, high blood pressure and eating habits.

The president’s physician, Navy Commander Dr. Sean Conley who, like me, is a D.O. or osteopathic physician, told reporters during an October 3, 2020, press conference that his team was using a “multiprong” approach to treat the president. He also mentioned President Trump had asked about hydroxychloroquine, but that he had not been given the drug for unspecified reasons. According to Conley:19

“[President Trump] is receiving all of the standard of care and beyond for routine, international COVID protocols. He’s the president. I didn’t want to hold anything back. If there was any possibility that it would add value to his care and expedite his return, I wanted to take it.”

Sadly, but not surprisingly, despite the now overwhelming evidence supporting the use of vitamin D, most media have reverted back to pushing the idea that vitamin D is useless. On the other hand, the president’s treatment protocol does provide a hint that alternative treatments such as the use of vitamin D, zinc and melatonin are gaining inroads in clinical practice. 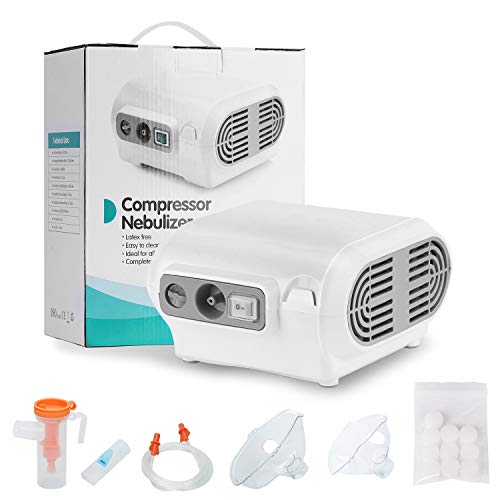 As mentioned, President Trump’s treatment protocol includes some of the remedies specified in the FLCCC’s MATH+ protocol, but not all. His treatment also appears to have been more aggressive than typically prescribed, with the early administration of both a steroid and remdesivir.

It’s somewhat disappointing to see the full MATH+ protocol was not followed, considering the FLCCC has shared the protocol with the White House on several occasions. In a short essay20 co-written by the entire FLCCC team, they express their conviction that the MATH+ protocol is one of the best, most effective, critical care protocols for COVID-19 to date.

The latest version of the MATH+ protocol, which was briefly summarized above, is detailed in “Quercetin and Vitamin C: Synergistic Therapy for COVID-19.” As the headline reveals, that article also reviews some of the latest research supporting the use of quercetin, which acts in a similar manner as hydroxychloroquine.

In my view, the President’s medical team overlooked (and probably weren’t even aware of) one of the most effective treatment options, namely nebulized hydrogen peroxide. This is a home remedy I recommend everyone familiarize themselves with, as in many cases it can improve symptoms within mere hours. It is particularly effective in those who are in the later stages of the illness.

Nebulized hydrogen peroxide is extremely safe, and can be administered at home without a prescription. In my view, it is one of the absolute best therapies for viral infections like SARS-CoV-2 or even worse respiratory viruses that will likely be unleashed in the future.

Dr. David Brownstein, who has successfully treated over 100 COVID-19 patients with nebulized hydrogen peroxide, published a case paper21 about this treatment in the July 2020 issue of Science, Public Health Policy and The Law. He also discusses its benefits in a recent interview I did with him.

In my April 2020 article, “Could Hydrogen Peroxide Treat Coronavirus?” I reviewed some of the basic science of how hydrogen peroxide works, as well as some of the studies assessing its therapeutic potential. The most relevant study22 was published in March 2020 in the Journal of Hospital Infection. They studied 0.5% hydrogen peroxide, and found it killed human coronaviruses, including the coronaviruses responsible for SARS and MERS.

Nebulized hydrogen peroxide is extremely safe. Brownstein has used it for 25 years with no ill effects being found. It’s also incredibly inexpensive, and you can administer it at home, without a prescription. In my view, it is one of the absolute best therapies for viral infections like SARS-CoV-2 or even worse respiratory viruses that will likely be unleashed in the future.

I strongly recommend buying a desktop nebulizer. It needs to produce a very fine mist, and desktop versions are stronger than handheld battery operated models. The one I use is the Pari Trek S Compressor Aerosol System with a face mask, (sold separately) not with the supplied mouth piece.

It is important to acquire the equipment and peroxide BEFORE you need it, as the sooner you treat the infection the better your results will be, although the testimonials are unbelievably impressive even in late stage illness. It is not necessary to treat yourself preventively, but only if you are sick or exposed to someone who is.

While I’ve been using a 0.1% dilution, Brownstein uses an even lower concentration of just 0.04%. Neither Brownstein nor I recommend using commercial 3% hydrogen peroxide found in most grocery stores, as it has potentially toxic chemical stabilizers in it. For optimal benefits, use food-grade peroxide and dilute it appropriately, using saline.

To dilute 35% food-grade peroxide into a 0.04% solution, first dilute it down to 3% by mixing 1 part peroxide with 10 parts sterile water, then take 3 cubic centimeters (CCs) of that 3% dilution and add it to a 250CC bag of normal saline. This brings it down to a .04% hydrogen peroxide concentration. In the video above, I go over the basics of how to do nebulized peroxide.

Previous article by Joseph Mercola: What Will It Take for Masks and Face Shields To End?

W.H.O. Condemns Coronavirus Lockdowns as ‘Doubling’ Global Poverty Will the Worm Turn With the Election in Three and a Half Weeks, or Will Totalitarianism Consume This Country?