Surely the very idea of sending out $300 billion worth of $1,200 checks to the overwhelming bulk of American adults to combat a government-ordered supply side shock is the height of Washington mendacity. These checks are intended for no other rational purpose than to function as a Donald Trump signed bribe payment to the voters.

For want of doubt, consider the findings of the Congressional Research Service with respect to the first round of helicopter checks sent out in April. It showed that 82% of families got the full amount of eligibility ($1,200 for adults and $500 for minor children); families with incomes between $66,000 and $121,000 (fourth quintile) got an average of $2,029 each; and that only 8% of US families at the tippy-top of the income ladder got nothing at all.

As we show below, the overwhelming share of these recipients did not loose their job or even suffer diminished pay levels. So what in the world was Washington doing send out upwards of 130 million of these checks to people who have not been economically dinged by the Covid? 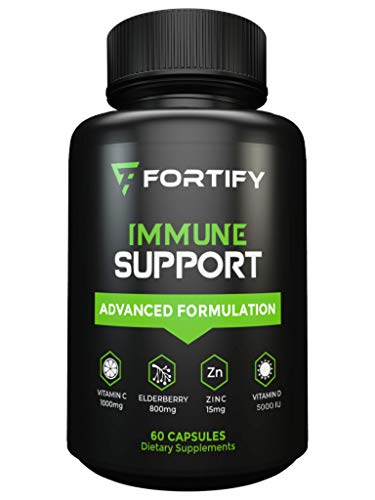 In large part, the answer is addictus stimulitis – the convenient Washington disease that says when national output falls short of a mythical academic construct called Potential GDP for whatever reason, the thing to do is mortgage future taxpayers and throw the resulting cash proceeds at politically convenient interest groups and constituencies.

In this case, since eligibility was capped based on a uniform national standard of $100,000 for single taxpayers and $200,000 for married households, the helicopter checks were a red state bonanza owing to substantially lower average incomes.

For instance, only 78.1%, 81.9% and 83.1% of adults in the high income Blue States of California, New Jersey and New York, respectively, were eligible for the $1,200 check. By contrast here is the number and percent of adults in typical Red States which got some of the loot:

So when the Donald tweeted the following yesterday, it’s pretty evident what he had in mind: Namely, a $1,200 tip for 94%+/- of the voters in the Red States, and implicitly nearly the same for the income-challenged voters residing in the rust belt precincts of Pennsylvania, Ohio, Michigan, Wisconsin and Iowa, who supplied his margin of victory last time around the track. 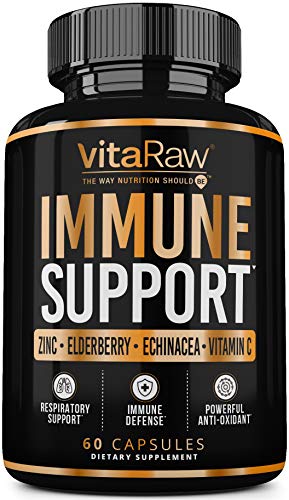 If I am sent a Stand Alone Bill for Stimulus Checks ($1,200), they will go out to our great people IMMEDIATELY. I am ready to sign right now. Are you listening Nancy?

Then again, the utter policy corruption of these helicopter checks is downright unspeakable. We are a great admirer of governor Kristi Noem of South Dakota because she has resolutely resisted the importunings and shamings of the Virus Patrol and kept her state open for business.

And well she might have. These are the Covid case recovery rates by age for her state – rates which do not differ appreciably from the CDC reported figures for the nation as a hole:

So, no, there wasn’t anything remotely resembling a widespread public health crisis in South Dakota, nor a related economic shock. After an initial disturbance in April from the nationwide shutdown when the state’s unemployment rate briefly touched 11.0%, the jobless rate has plunged by leaps and bounds and now stands at just 4.8%. Even more to the point, there were 421,000 nonfarm employees in the state last month, which surely begs the question:

These questions answer themselves. Not only would any genuine small state conservative positively barf on the very notion of universal helicopter checks, but in the days of yore even self-respecting RINOs (Republicans in Name Only) would have insisted upon a means test which limited the checks to households with incomes of say 115% of the poverty line ($30,000).

But after Donald Trump’s GOP do-over there is hardly a smidgen of fiscal discipline left in the so-called conservative party: The GOP’s new operative philosophy is, apparently, that if the Fed will print it, we’ll borrow and spend it – albeit just this one time, you see, owing to the urgent emergency at hand (fill in the blank here). 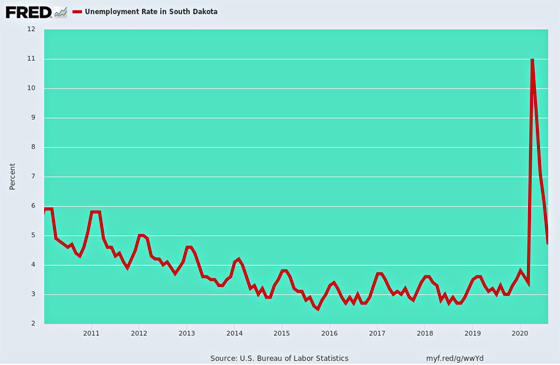 So the question recurs. What’s wrong with these people – are today’s Republicans so craven that they have joined the AOC “free stuff” brigade lock, stock and barrel?

After all, if you are sending 160 million checks to one and all, and upwards of 130 million of them have remained employed or have otherwise maintained their pre-Covid incomes including tens of millions of Social Security and SSI recipients, what else can you call it?

In fact, that gets us to the clinical essence of the addictus stimulitis disease. Namely, the misbegotten Keynesian notion that whenever the US economy’s output falls short of a wholly imaginary measure called Potential GDP, it’s fair game for any and all fiscal and monetary “stimulus” tools to be vigorously employed to close the gap.

To be sure, the GOP prefers to apply such macroeconomic therapies through tax cuts, while the Dems like the spending route. And both sides, of course, cheer on the money printers in the Eccles Building.

But the skunk in the woodpile is the notion that incremental spending funded with government borrowing will elevate GDP on a sustainable basis.

It does not. If said government borrowing is financed honestly in the bond market, you get a “crowding out” effect. That is, it just swaps the deployment of existing private savings from uses determined by private household and businesses borrowers to spending by the chosen recipients of Uncle Sam’s stimulus distributions. In the long-term, the impact of “crowding out” is clearly negative because the likely swap is from productive business investment to transfer payments and public sector boondoggles. 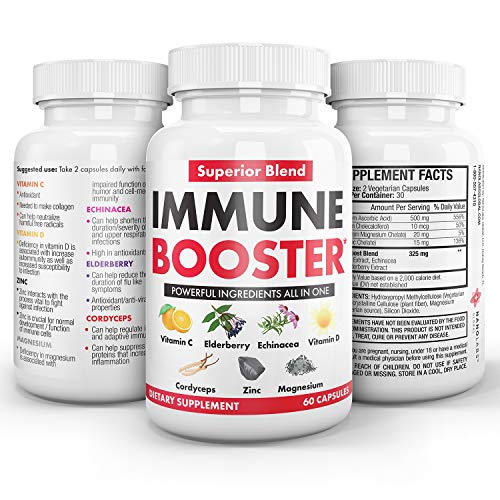 Likewise, if on the margin the Fed monetizes the new government debt, the crowding out effect is reduced or eliminated, but any resulting economic growth is more pulled forward from the future. The eventual result is not more GDP, but more aggregate debt and a greater drag on future GDP growth.

Moreover, in the interim the first order effect is to raise the price of bonds (and lower the yields) compared to what they would otherwise be owing to the Fed’s Big Fat Thumb on the supply/demand scales – an effect that also lowers cap rates and boosts the price of stocks and other financial assets.

The housing market provides a good example of the monetization approach to funding fiscal stimulus. What it has actually done is steadily drive down mortgage rates, which in turn have caused the price of the existing housing stock to rise.

As the Baghdad Bob of the housing market, the NAR’s chief economist Lawrence Yun, recently exuded,

Then again, how do windfall gains to sellers of the existing housing stock turn into higher GDP other than through temporary wealth effects (people allegedly spend more because they feel wealthier….well, until the bubble bursts). 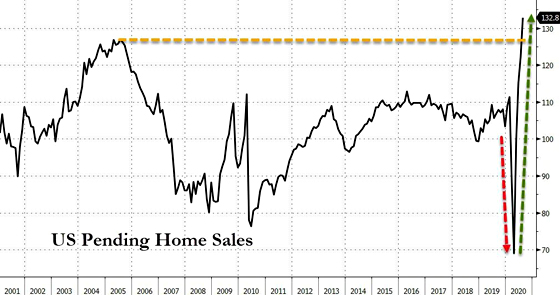 At the more empirical and practical level, insanely low mortgage rates have not stimulated single-family construction at all – one of the historic monetary policy transmission channels that the 1950s/1960s vintage Keynesian always use to jabber about.

Alas, the Covid Contraction has provided a live-first test of the efficacy of “lower for longer” on the mortgage finance/housing front. What happened since the monetary tsunami of after March 4 is that the churn rate of existing homes rebounded sharply (above chart), but the level of activity in the single family housing contraction pipeline has not rebounded at all (red line below). 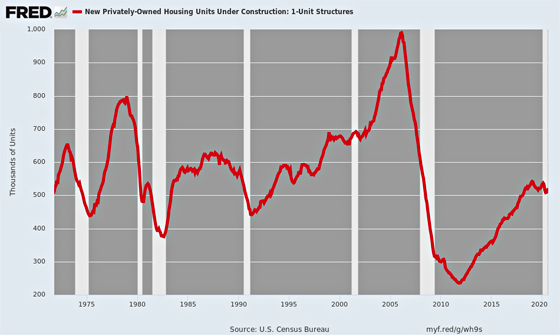 In short, “stimulus” delivered by the fiscal and monetary arms of the state does not create growth or sustainable wealth: It either crowds-out private spending (the bond route) or pulls it forward in time (the monetization route). In the latter case, monetization causes the falsification of bond prices and via the cap rate effect inflates the price of stocks and other risk assets.

As Wolf Richter recently noted, that’s copacetic for the to 10%, 1% and especially 0.01% of households, which own the preponderant share of risk assets. Indeed, since the Fed-fueled stock market rally from the March bottom, the wealth of the world’s top 2,000 billionaires has reached an all-time record:

The rally in stock prices since the stimulus and central-bank shenanigans kicked in globally pushed the wealth of just over 2,000 billionaires finally over the well-deserved $10 trillion mark, beating the previous record of $8.9 trillion at the end of 2019. Between April 7 and July 31, billionaires in the technology, healthcare, and industrial sectors saw their wealth (the many billions) increase by 36% to 44%. No billionaire’s billions left behind.

Or as Sven Heinrich summarized – the top 50 Americans now own as much wealth as the bottom 165 million!

12 years of non stop intervention & debt expansion. The result: 50 Americans own as much as wealth as the bottom 165 million combined. Unemployment at 7.9% and market cap to GDP is at 180%. The rich got all the wealth, the rest got all the debt. But let’s keep printing.

Needless to say, “stimulus” however financed does not happen in a vacuum. It leaves a residue of public debt that inexorably and positively subtracts from future growth and living standards. 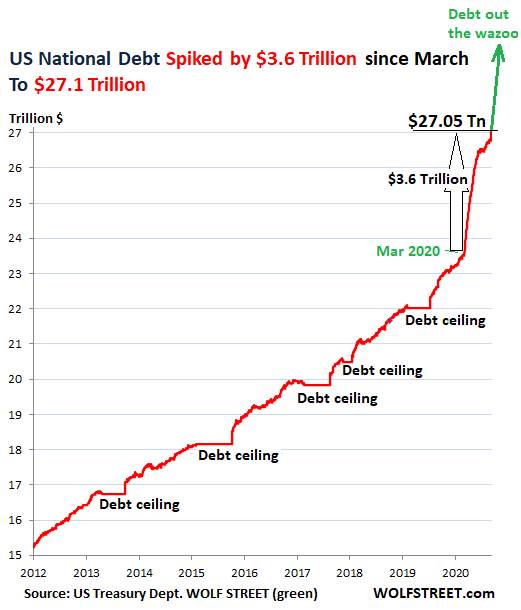 At length, the so-called potential GDP gap never closes, as we will document in Part 4. But in the interim, speculation runs rampant as is currently demonstrated by the red hot market for blank check IPOs (SPACs).

According to a leading industry publication, more than 115 initial public offerings for SPACs have brought in almost $44 billion in proceeds so far this year. That’s more than the last five years combined!

Perhaps in some signal that the top is near, in fact, there is now an exchange-traded fund, or ETF, dedicated to SPAC investing. It’s called the Defiance NextGen SPAC Derived ETF, which made its debut on the New York Stock Exchange under the ticker SPAK, and allows speculators to trade in and out of a pointless financial vehicle which owns other trading vehicles, which may or may not own actually operating assets that you get to own after the fact. 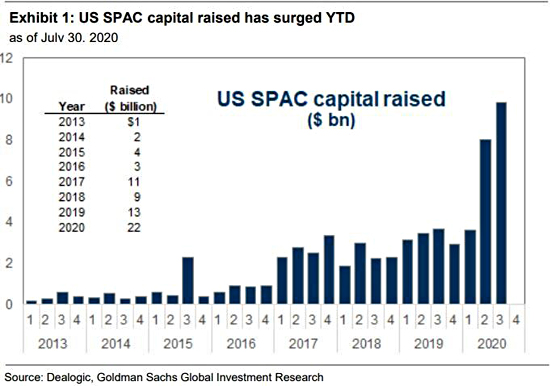 Likewise, junk bond issuance is hitting all-time records, but the overwhelming share of proceeds are used to either fund LBOs or finance leveraged recaps, which pay dividends to owners of existing highly leveraged LBOs. In either case, no potential GDP gap whatsoever gets closed.

As shown below, the US junk bond market smashed the annual issuance record, when sales recently hit a record $330 billion. That surpassed the previous full-year record of $329.6 billion in 2012 (and there’s three more months to go in 2020). 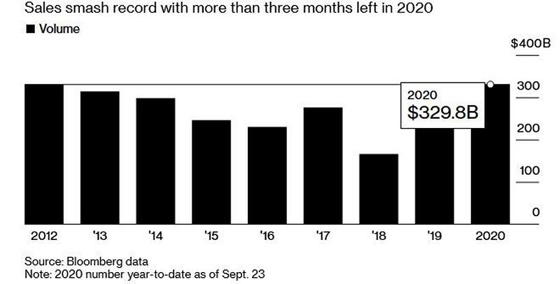 Yet, the geniuses in the Eccles Building who have made all this madness possible, and who essentially deflowered the fiscal virtue of GOP conservatives, insist there is no speculative excess on Wall Street.

You could call it the monetary equivalent of the Stockholm Syndrome if you want to be generous. Otherwise rank mendacity will do.