As cities burn and statues topple, the Nasdaq races to all-time highs.  As unemployment explodes to levels not seen since the 1930s, gambling on dicey stocks soars.  As private property becomes less secure, titles to property are bid higher.  As businesses struggle to reopen, it’s business as usual for the great bull market in financial assets.

If the statisticians at the CDC are to be believed, 0.01% of the U.S. civilian labor force has died of the coronavirus in 2020.  For a risk that compares to driving an automobile, much of the population was scared out of their wits and a third of the economy put on life support.

Official narratives have proven far more contagious (and lethal) this year than any virus, and the supporting lies keep getting bigger.  Upon arrival of an unknown health risk in late February, the authorities promoted a top-down one-size-fits-all solution of universal isolation.  The centralization of knowledge was assumed and market solutions not even considered.  As “non-essential” businesses were shut down, corporate debt markets locked up and stocks lost one-third of their value.  To deal with the economic mess, only top-down government solutions saw the light of day, this time at a price tag of over $5 trillion in borrowed and printed money (with plenty more on the way). 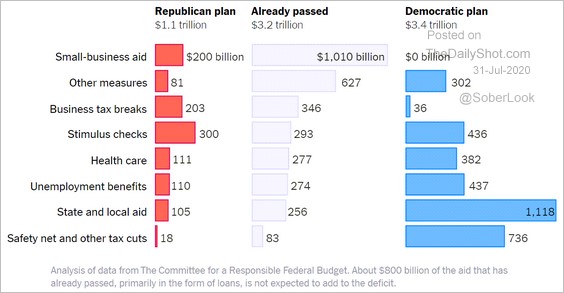 With the death of George Floyd on May 25, caught on video for the world to see, the narrative shifted overnight from gray lives matter and “shelter in place” to “black lives matter” and protest in public.  Never mind that Floyd had enough fentanyl in his body to kill him and that the officers on the scene may have acted to save him.  The mainstream media went into overdrive, promoting the well-rehearsed narrative of systemic racism.  Keep in mind, 30% of the top 30 highest-paying celebrity endorsements last year went to blacks (even though they account for 13% of the population).  Consumers generally don’t buy products endorsed by people they hate. 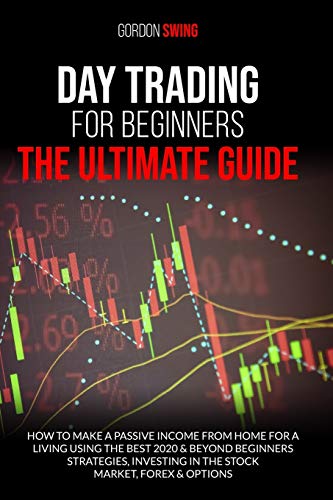 The third act in this play, reopening the economy, was met with fearmongering over spiking cases, despite evidence that this was due largely to increased testing and inflated by false positives.  (Apparently crowds looting and setting cars on fire were not a factor.)  Meanwhile, the weekly death rate has dropped 60% from its peak in April.  (Over the past week, there were 7,200 official deaths vs. 250,000 recoveries.)

All three deceptions are wrapped in the biggest of lies, that government has a magic printing press that will suspend the laws of economics and make it all go away.

As it turns out, a fair amount of the stimulus money found its way into the financial markets.  Evidently, the government’s economic advisors failed to consider the possibility that shutting down casinos while ordering people to remain home and mailing them $1,200 checks might give the green light to pile into the only casino still open: the stock market. 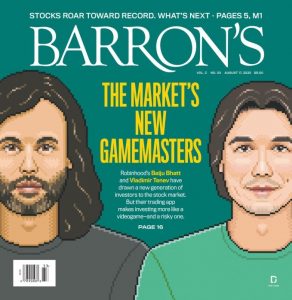 Robinhood traders lived up to their outlaw name during the coronavirus market downturn. The young investors booked profits — trading stocks with some of the best returns in the past two months — while other Wall Street veterans were left scratching their heads.

Young investors… appeared to have a prescient understanding of the market, unlike the billionaire hedge fund managers who said stocks would retest their lows.  Longtime investor Stanley Druckenmiller — who misjudged equities’ comeback — said Monday that the market’s strong performance over the last three weeks has “humbled” him and that he underestimated the power of the Federal Reserve.  Even legendary investor Warren Buffett sold his stake in airlines during the pandemic. 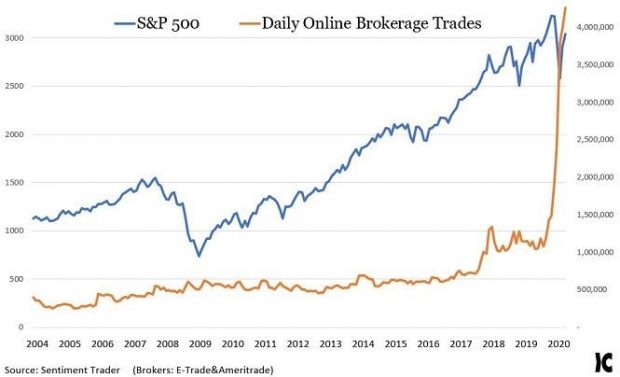 In the Twittersphere, the day trading parade is led by Dave Portnoy with 1.6 million followers:

It’s hard not to laugh, but also to know what passes for parody and actual investment advice these days.  Davey Day Trader, #DDTG, was recently invited to spend 20 minutes interviewing President Trump at the White House as both celebrated buying the dip in March.  You can’t make this up. 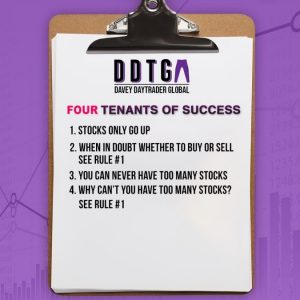 How to wreck an economy

2020 has been a textbook example of how to inflict maximum economic damage.  Let’s review:

1) The media incites a panic over a severe novel case of the flu.  Have state governors use this as a pretext to shut down a third of the economy.

2) With the social fabric frayed, the media segues to racial protests.  Allow bad apples to destroy property and have the police stand down while the mob takes over.

3) Pass trillions in money printing and stimulus, preventing the market from adjusting to rapidly changing events.  Incentivize unemployment by paying people an extra $600 a week to sit at home and day trade.

5) After you’ve crippled many small businesses with #1-4, regulate them to death, adding costs they can’t afford and inconveniences their customers don’t want.

Déjà vu all over again

Anyone who experienced the tech bubble of the late 1990s must be feeling a profound sense of déjà vu.  The internet was a paradigm shift creating a New Economy in which enlightened central bankers would prevent any serious downturn.  Silicon Valley was booming.  Wall Street was cranking out hot IPOs (initial public offerings) and repackaging companies by adding “.com” to the name in order to keep up with seemingly insatiable demand from the public.

The prevailing mood among investors was that making money was easy.  Youth was elevated and wisdom discarded.  Profits didn’t matter.  What mattered was “first mover advantage” and “eyeballs.”  Those who were too old to grasp the new rules just didn’t “get it.”  They were stuck in the Old Economy. 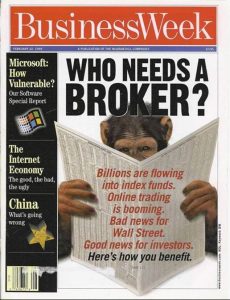 I remember when the late Ed Bradley of 60 Minutes did a story about the dot-com mania.  The young entrepreneurs he interviewed had a religious zeal, like they had been chosen for a higher calling.  One even had the audacity to tell Bradley he was a dinosaur and that his job was targeted for extinction. 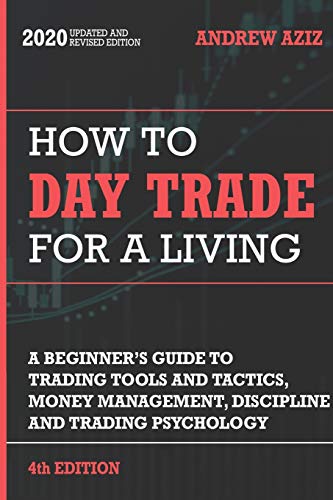 It is hard to escape the parallels with today’s mania for technology stocks, venture capital, day trading, hot IPOs and youthful exuberance.  There are two critical differences: the backdrop for the 2000 vintage was a booming economy and the dollar amounts were much lower.  In 2000, Microsoft, GE and Cisco Systems broke the $500 billion barrier for market capitalization.  On August 13, Apple hit $2 trillion.

Perhaps it is a rite of passage that every generation must take part in some sort of speculative madness.  Today’s millennials seem ideologically wired to believe in the upward slope of technological progress, conflate virtue signaling with investing, underestimate the economic damage from trillions of dollars of stimulus, and place their unswerving faith in the Fed.

Of course, amateur hour at the casino has a silver lining.  Experienced poker players salivate when the patsies show up.

(This article was excerpted from the latest issue of The Coffee Can Portfolio.)

Masks!How To Invoke a Face Mask Exemption at the Veterinarian & How To Make Sense of all Face Mask Orders