On Opportunity Missed; or, The One That Got Away

Procrastination has always been my chief vice, and it finally caught up with me on June 24 of this year at about 3:30 in the afternoon. But let’s back up a bit. A friend had sent an email recommending a certain brand of knife for self-defense carry, and I thanked him for the reminder that I needed to do the same. I eventually decided on a Spyderco folding knife and ordered one through the mail. For those not familiar with the brand, the base of the closed blade sticks out of the handle like a hump and has a big hole through it. The tip of the thumb is inserted into the hole for purchase, allowing the knife to be thumbed opened with just one hand.

After my Spyderco arrived, I set it on my desk and would practice thumbing it open during breaks from the computer screen. Being right handed and carrying my keys in my right pocket, I knew that I would have to start carrying my keys in my left pocket and my blade in my right pocket for quick, one-handed deployment. But, being a procrastinator, I just hadn’t gotten around to actually doing that yet. Besides, who thinks he’s going to be targeted for robbery in the laundromat of his own gated apartment complex? 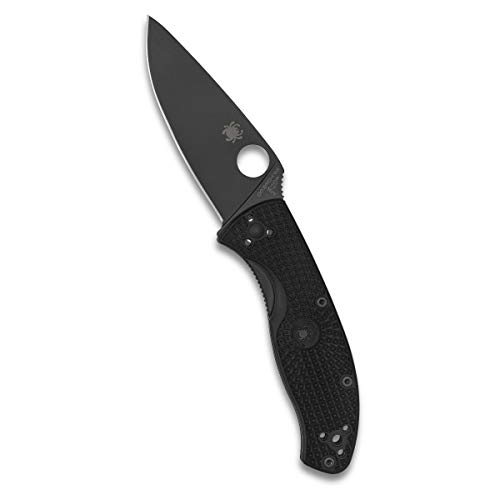 I had just put my clothes in the dryer when I heard a voice say, “Give me your wallet!” I turned and saw a black male, early twenties, six-two, athletic build, gray ensemble consisting of do-rag, muscle shirt, and shorts, no face mask. He had a revolver in his right hand that was pointed straight at me. Naturally this was somewhat disconcerting, and my mind took a moment to take it all in. I didn’t want to just hand over my wallet with all my credit cards and identification in it, knowing he might shoot me anyway so as to leave no witnesses. The old Jack Benny line—your money or your life / I’m thinking about it—flashed through my mind. My hesitation apparently vexed my assailant, and he stepped forward, swinging the revolver at me and striking me on the cheek bone on the left side of my face. He then stepped back, keeping the revolver trained on me.

But in that short time I had hatched a plan, and I immediately implemented it. I pulled out my wallet, took out the cash—it wasn’t that much—and put my wallet back in my hip pocket. I then waved the cash in front of him before throwing it up in the air in his direction as if I were throwing a handful of bills up onto the stage during a “make it rain” strip club performance. Then I moved in and engaged, going for the revolver. I managed to get both hands on it. Now for an old guy—I’m 67—I’ve still got a pretty good grip. In my younger days, deadlifting was a regular part of my weight workout regimen. I used to do all kinds of grip exercises, including squeezing a ball of wax just like Charles Bronson did in The Mechanic. And I had also done a little recreational judo and Brazilian Jiu-Jitsu, sports where getting a good grip on the fabric of your opponent’s outfit was an important part of the game.

In a surreal moment, like something right out of action cinema, I dropped down on one knee, pulling him off balance, and wrenched his wrist around so the gun was pointing at him. His index finger had come out of the trigger guard, so I inserted my index finger and squeezed the trigger, hoping for a loud bang! followed by a groan. Nothing happened. WTF! The next thing I knew, he let go of the gun, hurriedly scooped up the bills, and fled. I looked down at what appeared to be an antiquated .38 in my hands. I rotated the cylinder; every chamber was empty.

Had I had my Spyderco in my right pocket, I could have gotten it out after I had thrown the bills in the air, thumbed it open, and charged him, going for center body mass with the blade. Providence had delivered a perfect specimen of thug into my hands that I could have legally dispatched, but my own procrastination had kept me from achieving that beneficial end. A lot of good the Spyderco did me sitting on the desk in my apartment.

I walked back to my apartment with my trophy and phoned 911. While I waited, I took a look at myself in the mirror. Blood from a jagged laceration ran down the left side of my face and all over the front of my shirt. My very own Heidelberg dueling scar, Houston style! Soon a couple of Houston’s finest arrived, a young woman and an older man whose name patch suggested that he was a Nigerian immigrant or the son of immigrants. The first thing I did was turn the gun over to them. They were both very professional and sympathetic as they took the report, informing me that EMTs would be arriving to check me out. The female officer took a photo of my injury. 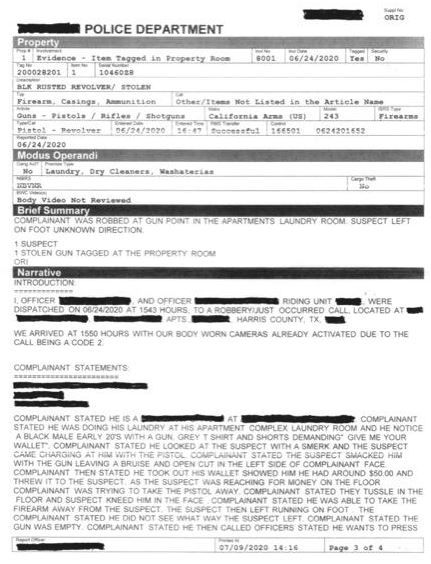 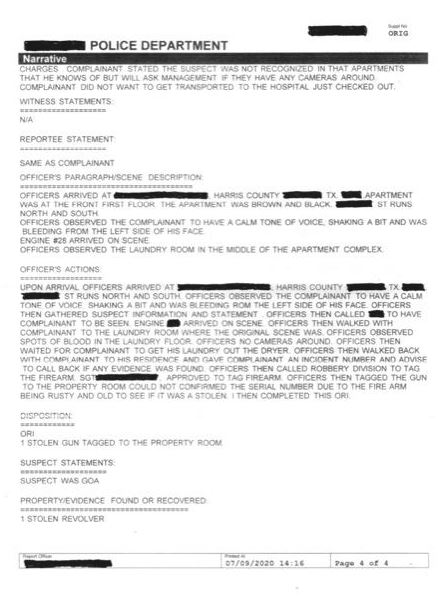 When the trio of male EMTs arrived, they asked me questions like “What city is this?” and “What’s your apartment number?” I knew what they were doing, and I gave appropriate responses.

Then it was my turn. “What year did Constantinople fall to the Ottoman Turks?” 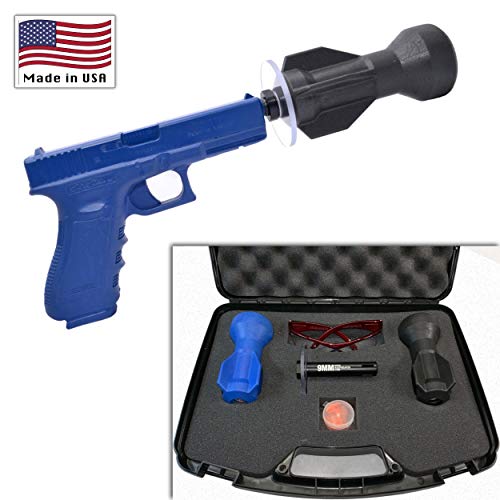 One EMT asked me if I wanted to go to the hospital, but I said only if it was absolutely necessary, like if I needed to get stitches. He said stitches weren’t required, and that I just needed to keep the wound clean and covered and to use Neosporin on it. They had already cleaned and disinfected the area. I thanked them all just before they left.

I then showed the officers to the scene of the crime. Little red dime-sized dots spattered the floor tiles of the area of the laundromat where it all took place. I took my clothes out of the dryer, and the officers escorted me back to my apartment, after which I thanked them for everything. The female officer had even offered to help me carry my laundry back. God bless the Houston Police Department. And may every idiot who wants to defund them be pistol whipped across the face by some thug to knock some sense into them.

All in all, I felt that I had acquitted myself fairly well, this being the first time something like this had ever happened to me. I’ve heard that things like this can really mess up some people’s minds, even to the extent of their coming down with PTSD and being fearful of venturing out to go about their daily business. Not me; I was just mad at myself that I hadn’t been able to kill the bastard. Knifing a thug surged to the top of my bucket list. And the next time around I would be prepared, and being prepared would give me even greater sangfroid and steady nerve. 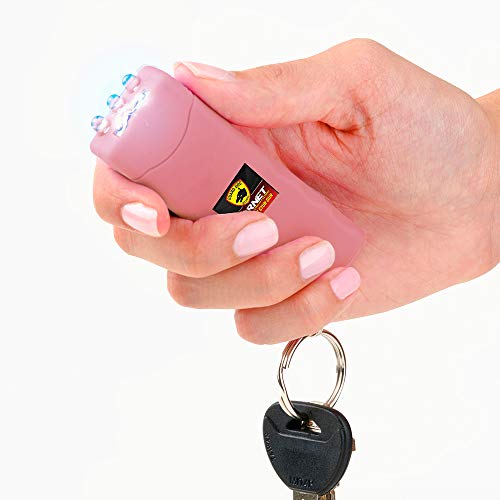 Another matter about which I had been procrastinating was getting my license to carry a handgun. I’ve since sent in my application, and I’ve ordered a well recommended brand of pocket pistol for easy concealment. When I went out to buy ammunition to have on hand for when my pistol finally arrives, I was shocked to find that all the gun stores had run out. How the hell can a city as big as Houston run out of something as common as .380 ACP ammo? It then dawned on me that dwindling ammo supply was a rising barometer reading of anticipated social unrest. In desperation, I searched online and found a supplier that offered bulk quantities only, and I ordered their package deal that included seven boxes of 50 rounds each along with a tactical sling pack to carry the ammo in. When I checked their website not too long after placing my order, they had already run out of the .380 ACP bulk packages; my order was evidently one of the last few they had on hand.

Now even if a person does have a bona fide license to carry, entities can still bar the carrying of firearms on their own premises. No problem. I’ll just take my pistol out of my right pocket, stow it in my vehicle, and slide the Spyderco into my right pocket. Having a blade isn’t quite as good as having a gun, but it’s a whole lot better than being completely unarmed, that’s for sure. All I can do is be as legally prepared as I possibly can under the circumstances and not fail in my objective should Providence see fit to send another thug my way.