A Monument to Authoritarianism

News coverage of the recent riots in Washington, D.C. revealed the utter inability of the police to protect shop owners, residents, and even the church across the street from the White House from vandalism, looting, and arson.  National Guard and even active-duty military troops were brought in to protect the White House itself.  The Secret Service is said to have brought the Trump family into the underground bunker beneath the executive mansion at one point.

Some of the government’s monuments to itself, which seem to be on every street corner and in every intersection in Washington, D.C., were vandalized and spray painted with graffiti.  Yet it was still surprising to see one morning on the news that even the Lincoln Memorial –the most popular tourist destination in the city, the national shrine — had a few graffiti scribblings etched on it during the previous night’s rampant hooliganism.

Well.  That does it.  The line had been crossed.  The response of the government was, to paraphrase President George H.W. Bush after the 1990 Iraqi invasion of Kuwait:  “This Shall Not Stand!”  The next morning the news contained images of what appeared to be at least a hundred heavily-armed national guardsmen posted at the front of the Lincoln Memorial.  There were probably dozens or even hundreds more protecting the other sides as though they were preparing for another Battle of the Bulge.  You can loot and burn down every shop in Georgetown, set fires to garbage dumpsters and private cars in the streets, terrorize the public, assault and even shoot police officers and burn their squad cars, but hands off the Lincoln Memorial – the state’s quintessential monument to . . . statism.  Would the Soviet government have permitted the defacing of a statue of Stalin?  The Chinese government a trashing of Mao?  How about red devil horns spray painted on Castro’s statue in Havana?  As Murray Rothbard once said, the state considers the most grievous of crimes to be crimes against itself – or in this case its image of itself.  Not gonna happen, as George W. Bush was fond of saying (at least according to his imitator on Saturday Night Live).

In my new soon-to-be-released (July 7) book, The Problem with Lincoln, I devote a chapter to how Lincoln, who was arguably the most hated and despised of all American presidents during his lifetime (See Larry Tagg, The Unpopular Mr. Lincoln), became deified in the decades after his death by the Republican party, the New England clergy, the government schools, and the entire apparatus of state propaganda, the physical cornerstone of which is the Lincoln Memorial, completed in 1922.

The article explains that the fasces was originally used by the Roman emperors as a “symbol of power and authority,” especially “executive authority” (i.e., dictatorial power).  Someone exercising such authority “could expect his orders to be obeyed, could dole out punishment, and could execute those who disobeyed,” the government document approvingly states.  This is the “true meaning” of the shrine to Abraham Lincoln, says the government.  It has nothing to do with governmental protection of life, liberty, and the pursuit of happiness or any of the other ideas of the founding generation; by the government’s own admission it is a shrine to fascist authoritarianism, the kind of American state that was ushered in by the Lincoln administration.

The rods of the fasces, the article continues, “suggest punishment by beating.”  The axe “suggests beheading” of those who disobey the state’s orders.  “Power, strength, authority, and justice” are what the fasces (where the word fascism comes from, by the way) mean, says the U.S. government.  They symbolize “the power and authority of the state over the citizens . . .”

In other words, what the Lincoln Memorial represents, according to the government that built it, is that the people are the servants, not the masters, of the state.  They had better obey their rulers’ dictates – or else.  The purpose of government is not to secure our natural rights to life, liberty, and property, but to centrally plan our lives and to punish us if we object or disobey the state’s orders.  Lest Americans balk at associating their government with the brutal and barbaric Roman dictators this symbol of the Roman empire is said to have been “Americanized,” the article explains, by placing an cute little eagle above some of the fasces on and around the Lincoln Memorial.

More than 150 years of relentless state propaganda deified not just Lincoln the man, but all of his unconstitutional, dictatorial behavior, from the illegal suspension of habeas corpus, the shutting down of hundreds of opposition newspapers in the North, the mass arrest of tens of thousands of political dissenters without due process, to committing treason by invading the sovereign Southern States (Article 3, Section 3 of the Constitution defines treason as “only” levying war upon the free and independent states, as they are called in the Declaration of Independence), deporting an opposing congressman from Ohio, and much more.  Is there any wonder that the Coronavirus Planned-demic led so immediately to an orgy of authoritarianism from hundreds of mini-Mussolinis (i.e., governors, mayors, city councils)?  If you want to know where the notion came from that the constitution can (and should) be suspended whenever there is an “emergency,” look no farther than the Lincoln Memorial and who and what it represents.  If you want to know why governors, mayors, and other pipsqueak local politicians think that they will actually be praised by acting like dictatorial tyrants, shutting down businesses on a whim, destroying the livelihoods of their citizens, and enforcing their petty “orders” with heavily-armed and militarized local police, look no farther than the symbolic meaning of the Lincoln Memorial and the man who it has helped to deify.  Even foreign despots invoke “Saint Lincoln” to “justify” their tyranny.  When the former Pakistani dictator Pervez Musharraf imposed martial law on his country he “justified” it by saying that Abraham Lincoln had done the same thing in his day.

None of the “lockdown orders” and dictates was constitutional, despite the fact that every last one of them took an oath of office in which they pledged to protect and defend the Constitution.  None of the “orders” were actual laws passed by legislatures but were the mere words of clueless, power-mad politicians.  The glorification of “executive power” has now totally overthrown the quaint notion of the founding generation that the people should be the masters rather than the servants of the state, that government’s just powers depend on the consent of the governed, and that the state should be “bound by the chains of the Constitution,” as Jefferson once said.  Today we have top advisors to  presidents saying such things as “Stroke of a pen, law of the land.  Kinda cool,” as  Bill Clinton advisor Paul Begala once remarked.

The Constitution itself has long been essentially meaningless in that regard, and a key reason for this is the glorification of unconstitutional executive power that really began during what generations of historians have labeled – and generally praised as — “the Lincoln dictatorship.”   If this is acceptable to Americans, then fascist authoritarianism is what they will get and deserve – “good and hard” — as H.L. Mencken once put it. 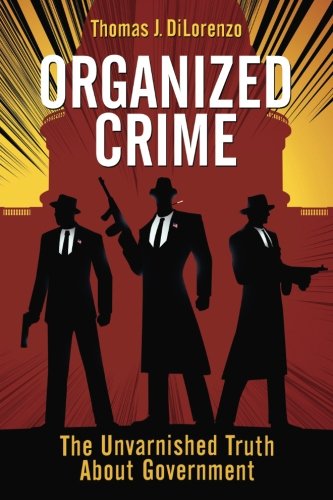 Lynette Zang: The Plandemic Is a Cover for the ‘Global Financial Reset’When Will Government Take its Foot Off the Public’s Neck?