The Three Nations of Covid and a Windbag Named Fauci

If you don’t think our so-called mainstream rulers has gone off the deep end, just consider New York Mayor Bill de Blasio’s recent menacing tweets to the orthodox Jewish community in Brooklyn, which has insisted on holding funerals, including one Monday for a revered 73-year old Rabbi attended by upwards of 2,000 mourners:

“Something absolutely unacceptable happened in Williamsburg tonite: a large funeral gathering in the middle of this pandemic,” the mayor said in one post. “When I heard, I went there myself to ensure the crowd was dispersed. And what I saw WILL NOT be tolerated so long as we are fighting the Coronavirus.”

My message to the Jewish community, and all communities, is this simple: the time for warnings has passed. I have instructed the NYPD to proceed immediately to summons or even arrest those who gather in large groups. This is about stopping this disease and saving lives. Period.

Well, NYC is nearly a ghost town and now its idiotic ruling pols are suggesting that, apparently, only ghosts may attend funerals without governmental permission!

But actually, this photo from the offending funeral is another picture worth a thousand words.

That’s because by now, everyone, and we mean everyone, knows that the Covid-19 strikes the elderly, the frail and the already disease-afflicted; and that these vulnerable populations need to not only “social distance”, but actually stay home and keep out of harm’s way completely.

That appears to be exactly what happened at Rabbi Mertz’ funeral. If you can spot an octogenarian in this crowd, or even a grandfather, your eyesight is better than Clark Kent’s.

And besides being preponderantly way under 50-somethings, they congregated outdoors and virtually all were wearing masks. Yet claiming to speak for some latter day “Committee of Public Safety”, Mayor Robespierre actually threatened to bring in the gendarmes.

Hundreds of people gathered in Williamsburg, Brooklyn, for a massive funeral Tuesday evening 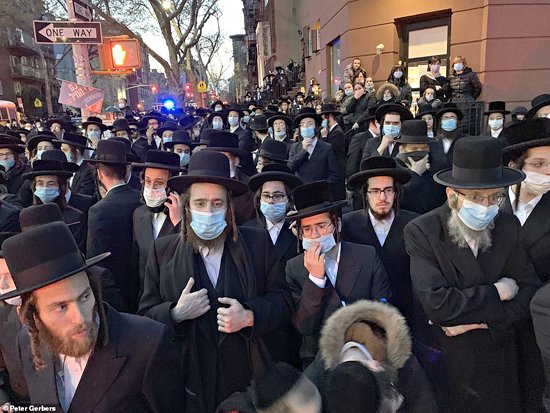 As to whether the above pictured citizens should be jailed or fined, let’s start with a tale of two Lockdown Nations – New York City and the semi-socialist Republic of California.

Both have imposed severe stay-at-home and business shutdown orders almost from the day the Donald issued his unfortunate March 16 guidelines. Yet here are the results 45 days later with respect to their mortality rates, which is ostensibly the reason officialdom issued these draconian “cease and desist” orders in the first place.

To wit, the mortality rate as of April 28 was 143 per 100,000 in New York City and 4.6 per 100,000 in the state of California. Essentially the same public health policy lockdown, but night and day differences in the outcome.

Yes, New York is more dense than California on average, but that doesn’t even remotely explain the difference. That’s because by now there is overwhelming evidence that the severity of the quarantine regime has essentially zero impact on the mortality metrics.

And folks, even the Virus Patrol hardliners don’t claim their lockdown orders are designed to prevent 3-day hospital stays by people who get an unusually stubborn case of the winter flu. This is about death prevention and that’s why they run the Chyron of Death across the CNN screen day and night.

But there is zero correlation:

We call attention to Washington state, Maine and Massachusetts especially because even though they all have severe statewide lockdown regimes and their overall mortality rates very widely, from 3.8 per 100,000 in Maine to 45.7 per 100,000 in Massachusetts, they do share one thing in common. To wit, 40-60% of their Covid-fatalities have been in nursing homes.

Ironically, Sweden has one of the least restrictive lockdown regimes in the world – schools, businesses, restaurants and retail remain open–yet its mortality rate of 22 per 100,000 is virtually the same as the lockdown state of Massachusetts.

Self-evidently, what matters is not how economically suicidal the lockdown regime is from one jurisdiction to the next, but the age, health status and general frailty/vulnerability of the populations at issue. In the case of Washington state where the first corona cases occurred, upwards of 40% of the 690 deaths to date have been in nursing homes, meaning that its general population mortality is just 6.0 per 100,000.

As we amplify below, these single-digit rates are rounding errors on the scheme of things, even as all deaths are both regrettable and inevitable. But by what rational calculation does Governor Inslee insist on keeping the state in Lockdown and its economy heading into the the drink?

Someone might dare inform him that the general mortality rate from all causes for his citizens is 900 per 100,000 annually, and that, therefore, he is imposing the economic mayhem evident in these charts below owing to a risk of Covid death for the general population of his state that so far has been 0.7% of the normal average.

Stated differently, had Patient Zero (aka the Donald) not been the victim of malpractice by his doctors led by Fauci and the Scarf Lady, he might have been advised to dial in on day #1 to the heart of the Covid-threat. Namely, the 15,600 nursing homes in America, which domicile some 1.5 million residents, of which one-quarter (425,00) are over the age of 80 years.

In the case of Massachusetts, where the majority of deaths have occurred in nursing homes, the average age of Covid-deaths has been 82 years.

Needless to say, you did not need to be entombed in the infectious disease tunnel at the NIH for 52 years like Dr. Fauci, a pretentious 79-year old windbag who should have himself been put in a retirement home years ago, to realize that nursing homes are dense-packed with the frail, disease-afflicted elderly.

So rather than wipe out $4 trillion of GDP via Lockdown Nation they might have started with say $25 billion of incremental money for Medicare/Medicaid and the state public health agencies to zero-in on protecting, isolating and treating the nursing home residents.

After all, we find it easy to believe that spending $20,000 per nursing home resident might have saved or extended a lot more lives than the WHO/CDC/DR. Fauci blunderbuss assault on the entire US economy.

Indeed, with each passing update, the CDC data itself becomes an ever more dispositive indictment of the madness the Donald’s doctors have imposed on the nation. It is now strikingly clear, in fact, that when it comes to Covid-19 there are three nations in America, and that the attempt to shoe-horn them into a one-size fits all regime of state control is tantamount to insane.

There is first the Kids Nation of some 61 million persons under 15 years, where even by the CDCs elastic definitions there have been just 5 WITH Covid deaths thru April 28. You needn’t even bother with the zero-ridden fraction of 1 per 100,000 (its actually 0.008) to make the point.

That is to say, last year there were about 44,000 deaths among the Kids Nation – so corona-virus accounts for just 0.011% of the total, and in no sane world would it be a reason for shutting down the schools.

Of course, the Virus Patrol insists that the school closures are an unfortunate necessity because otherwise the Kids Nation would take the virus home to the Parents/Workers Nation. That is the 215 million citizens between 15 and 64, who account for the overwhelming share of commerce, jobholders and GDP.

Yet according to the CDC, there have been just 8,267 deaths WITH Covid in this massive expanse of the population, which figure represents a mortality rate of, well, 3.6 per 100,000.

But here’s the thing. The normal total mortality rate for the 15-64 years old population is 335 per 100,000. So we are talking about shutting down the entire economy owing to a death rate to date which amounts to 1.1% of normal mortality in the Parents/Workers nation.

Finally, we have Grandparents/Great Grandparents Nation, comprised of 52 million citizens. But they account for 32,000 or nearly 80% of the WITH Covid deaths as of April 28 – with 15,000 of these being among those 85 years and older.

Stated differently, the risk of death posed by Covid-19 is 7,600X greater for Grandparents/Great Grandparents Nation overall than for Kids Nation, and 29,000 times greater for the several million Great-Grandparents afflicted with severe comorbidity and likely as not to be in the care of a nursing home.

Needless to say, it did not take a catastrophic experiment with Lockdown Nation to figure this out. It was already known from China and the history of other coronaviruses.

If there were any reason or justice left in America, Dr. Fauci and the Scarf Lady and the whole CDC/WHO lobby that brought about this disaster would actually be headed for their own quarantine – the kind that doesn’t happen at home and which can’t be lifted by the whims of the Cuomo brothers or Mayor Robespierre.

Governments Attack Mankind – PODCAST ‘The Love of Many Shall Wax Cold’: A Christian Interpretation of Our Times