A Story That Didn’t Make it Into “Bullyocracy”

My new book Bullyocracy: How the Social Hierarchy Enables Bullies to Rule Schools, Work Places, and Society at Large, contains countless tragic stories of youngsters and adults, who were bullied sometimes literally to death, to the disinterest of those who could have done something to prevent it.

I wanted to share an especially sad and poignant anecdote, from a seventy two year old woman who wishes to remain anonymous. Her story encompasses the problem of bullying in all its breadth and scope. She is exactly the kind of person I wrote the book for. This post will largely consist of excerpts from the emails she sent me.

Note- I’ve edited here or there for brevity.

“I was born in 1947…in 1949 my parents separated and I came east to live with my grandmother and her father in Washington, NJ….Nana was 52 and Grandpa was 74 when they took me to raise. 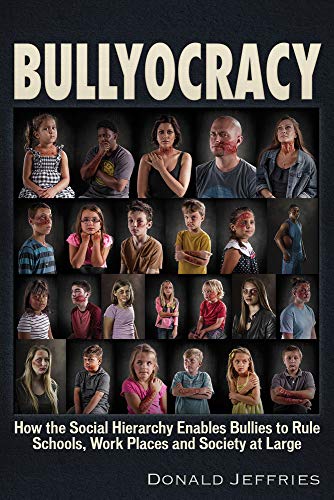 The only playmates I had were two girls who lived next door….Jane and Susan….Jane was my age and Susan was two years older than both of us….we were great friends…playing tag, building forts, and doing things kids do…..in 1951 I had polio for the first time (I had it again at the age of 7-1/2)…after my slow recovery things between Jane, Susan and myself changed….maybe because I could no longer run as fast as I used to nor could I climb trees anymore….both of them started to pick on me…laughing at me when I would start to run and fall down…the laughing escalated to hitting and punching me in the stomach….they would gang up on me…remember once we were playing and decided to play cowboys and indians…I was the indian so I had to be tied up…to a tree…in order to get me to agree to being the indian they kicked me in the legs (my weak spot of course after having polio…actually…they still are) til I fell down…then they tied me to the tree with rope…Susan said that was not good enough and she went and got snow tire chains from her garage and her and Jane re-enforced the rope with chains….after they were done with this they took sticks and poked me til my legs were bleeding…then left me there, gagged….it was dark out by now and I could hear my grandmother calling me but I could not answer her because I was gagged…finally she found me…untied the chains and ropes and helped me down the hill to the house…both parents denied that their child had done this to me…which left Nana without much recourse….

The bullying continued on til my mother remarried when I was seven and I moved to Lake Mohawk, NJ….other than spending summers with Nana and Grandpa..which was the return of Jane and Susan…I had a reprieve from them at least !….but I somehow traded them in for a new set of bullies !…this time it was all boys…Brian, Pat and Don…all of these boys were about 3-4 years older than I which made it worse…we of course all went to school together and thus too the same bus as we lived within a mile of each other….they started calling me names and saying things like ‘no one wants you…not even your father’…which of course hurt my feelings…from there it only escalated to sitting alone on the bus and these boys telling everyone about my name and my father so now I had more kids teasing me…then they started to kick me at the bus stop and spit on me telling me I was ugly, fat and should be killed…(I was not ugly nor fat)…at lunch period I sat alone for 3 years and sat on the bus alone for three years, etc…their favorite thing was to look for road kill, pick it up and jam it down the back of my shirt, jacket, coat, sweater, smash it into my back, spit on me or rub the blood from the animal in my face and then run away…we had a beach all the kids went to at the Lake which happened to be the same beach our houses were assigned to…I would go swimming when they were not there…but they would look out for me and then go swimming too….that was horrible…two or three of these boys would grab me under the water so I could not see them and pull me under so I could not breath…when they let me up I was blue and could hardly breath…they would wait til I I was okay and do it again…there was no way to escape as they would hold on to me as they were a lot stronger than I…my mother went to the school and complained and to each one of the parents…to no avail..!!

When I was in school the teachers, etc. never held the students accountable for their actions unless of course they broke a window playing softball…otherwise…you were on your own !  The really sad part about this whole thing is that these kids grew up to treat others the same way they treated me…why…because no one told them that it is wrong to treat people without respect, etc…they are the ones who kick the dog, beat the wife, abuse their children, etc…it is what they have always done and no one has disciplined them nor taught them that is type of behavior is unacceptable !  And again on top of this…they grow up and VOTE !!…

My senior year ..1965..started off with a bang of bullying…I now looked different than the rest of the members of the senior class, dressed differently and even had perfume they had never even heard of…the bullying started with the kids…lead on by Jane and Susan…about how ‘weird’ I was, and proceeded to make fun of me even in class by pointing me out to others as well as the teachers…who may I add…laughed at me along with the students !…I kept to myself..did not socialize nor spoke unless I was spoken to…but this did not stop the taunting….my locker was broken into and my books were thrown all over the hall a couple times, etc…one of the worse times was when I was menstruating..and what Jane and Susan did and what my teacher said in front of the class…I shall spare you that…it was truly horrible and hurtful…the other things that the teachers did would be to tell me in front of the other students that I was not very smart and felt that I would never be able to understand the material being presented in the class….this of course made me feel even worse …if that was possible.

After enduring a year of this finally came my class award ceremony at the end of the school year…..it was about the time when everyone was having their yearbooks signed…etc….the ceremony was held in the school auditorium which was very large….and on the day of the ceremony it was full…I had been told prior that I would be receiving an award but was told I would have to wait and see what kind of award it was, it was a surprise….on the day of the ceremony my mother and grandmother arrived at school to see me receive my award…they were as excited as I was…probably more so since they knew what kind of year I had had….we are all in the auditorium seated when the principal started calling the names of students who were receiving awards up to the stage one by one to receive their award….when my name was called I could not wait to receive an award…since I never had before in my life….I remember walking up to the principal and shaking his hand…he then announced to the entire audience my name and that I had been voted by him, the faculty, the board of education and the entire student body ‘Most Unlikely to Succeed’…and he went on talking about what a poor student I had been as evidenced by my grades, etc…and that he himself failed to see me becoming much in life….I was horrified !!  I looked at my mother and grandmother who were floored putting it mildly !!…every one in the audience applauded, whistled and laughed and made audible jokes as I left the stage in tears !….I was crying loudly when I got to Nana and my mother and the students who were sitting behind them laughed and started taunting me ….I left…walked out of the school and over to the car…Nana and my mother following…they said nothing to me on the way home….I went to my room and cried…could not think of anything else to do…I had had years of this kinda stuff and was imploding…”

This woman went on to lead a pretty normal life, which is astounding in and of itself. She seems remarkably well adjusted, considering the literal torture she endured throughout her childhood. The individuals and institutions she should have depended on to defend and protect her all failed. As was shown by the especially horrific recollection of the high school awards ceremony, the principal of her school participated in the bullying. How does someone with that kind of personality defect, that kind of lack of decency and empathy, attain such a position?

As my book shows, there are other teachers, and principals, who not only refused to stop the bullying of others, but actually were the ones doing the bullying. Please read the book, and spread the word. There are far too many older adults, living with such nightmarish memories. Most did not adjust as well as she did. Some were unable to marry or have children, or even interact socially with others.

No one should have to experience what this anonymous woman did, but a shameful number have. We should all be angry enough to change the culture, before it happens to anyone else.