Spirits in The Material World

As I was driving home from work last week, an almost forty-year-old song began emanating from my radio. I’ve always appreciated the music of The Police, but was never a huge fan. Spirits in the Material World was a relatively minor hit from their 1981 Ghost in the Machine multi-platinum album. I’ve probably heard it hundreds of times over the last four decades, but the lyrics struck me as particularly apropos at the end of a week where lunatic left-wing politicians staged a battle royale of ineptitude, invective, and idiotic solutions, in front of a perplexed public in a Vegas casino. Sting wrote the lyrics to this song in 1981 at the outset of the Reagan presidency. It is less than 3 minutes in length, but says much about humanity and the world we inhabit.

The interpretation of Sting’s (Gordon Sumner) lyrics depends upon your position in the generational kaleidoscope of history. As a boomer, Sting came of age during the 1960s and 70s. He was thirty years old in 1981 as the Second Turning (Awakening) was winding down and Reagan’s Morning in America was about to launch the Third Turning (Unraveling) in 1984.

His passionate idealism and search for spiritual solutions to the problems of the day had not been extinguished. The raging inflation of the 1970s had led to the worst recession since the Great Depression. The Cold War was at its coldest. Politicians had been discredited as criminal (Nixon) or incompetent (Carter). Sting and many others of his generation had lost faith in the political system. His viewpoint fit perfectly into the Strauss and Howe assessment of our last Awakening period (1964 – 1984). 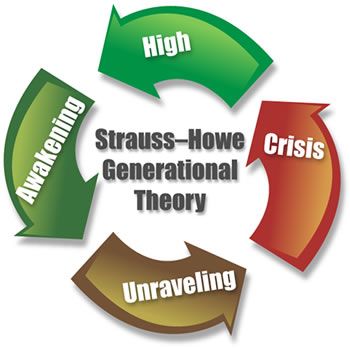 “Young activists and spiritualists look back at the previous High as an era of cultural poverty. America’s most recent Awakening was the “Consciousness Revolution,” which spanned from the campus and inner-city revolts of the mid-1960s to the tax revolts of the early ‘80s. Coming of age during this Awakening was the Prophet archetype Boom Generation (born 1943 to 1960), whose passionate idealism and search for authentic self-expression epitomized the mood of the era.” – Strauss & Howe – The Fourth Turning

Sting’s opening lyrics were accurate in 1981. The spiritual was about to give way to the material. Another turning was in progress. Individualism and self-actualization were about to come into vogue. The “Me” generation was taking control. Society was about to be transformed by a “greed is good” mentality. The term “material world” was about to transform our nation. For the next two decades stock markets boomed, taxes were slashed, crony capitalism flourished, deficit spending became the norm, consumers consumed on credit, globalism was preached by the ruling class, and we devolved into debt serfs.

As the Unraveling unraveled in the early 2000s, with the dot.com debacle, 9/11, Iraq War, Wall Street created housing collapse, and ultimately the financial system crash in 2008, a pervasive distrust of institutions and leaders swept over the country. The Fourth Turning had arrived.

The “no bloody revolution” lyric struck a nerve when I heard it. Sting was right in 1981. Bloody revolutions don’t happen during Awakenings or Unravelings. But they do happen during Fourth Turning Crisis periods. There is no possibility of political solutions. The nation has split into competing camps, with no possibility of compromise or negotiated settlements. Our culture has been degraded. After decades of gorging on iGadgets, luxury automobiles, McMansions, and keeping up with the Joneses, the cynicism and desperation of the masses is palatable.

Greed, swindles, delusion and avarice have created an unpayable mountain of debt, severely risking the future of our country, and producing social disorder which will lead to bloodshed. There is a simmering rage just below the surface of a superficial civility, ready to explode at the slightest provocation. The 2016 ascension of Trump against the wishes of the Republican establishment and Sanders’ current ascension against the wishes of the Democrat establishment is proof the existing social order is rapidly losing control and will be swept away in a torrent of violence once the debt dam ruptures. The mood darkens by the day. 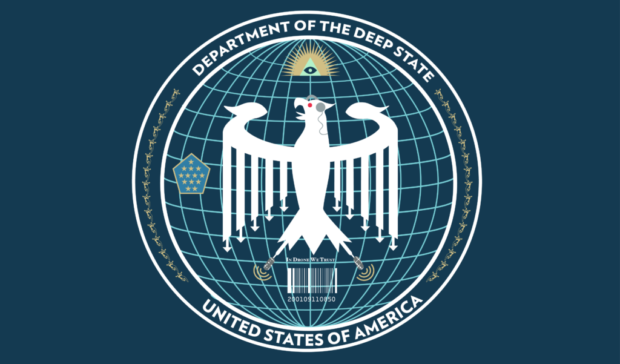 Sting’s inspiration for the song was the writings of Hungarian author and philosopher Arthur Koestler, whose book Ghost in the Machine was employed as the album name. Koestler’s life had many similarities to other authors of his time, like Orwell, Huxley, Steinbeck and Hemingway. In his youth he supported socialist causes, but like Orwell, became a staunch anti-communist. Koestler believed outside influences could destroy our spirit and restrict our thinking. The “spirits” and “ghosts” Koestler wrote about were the individual’s higher sense of life that gets lost in the “machine”, twisted by overbearing governments, mega-corporations, and a traitorous Deep State.

Our so- called leaders speak and offer nothing but lies, misinformation and propaganda. The ruling class has subjugated the meek by using government schooling to dumb down the masses, using Bernaysian propaganda techniques to control their wants and needs, and manipulating their ignorance by convincing them buying material goods with high interest debt leads to wealth. It’s the rhetoric of failure for average Americans, but the rhetoric of success for bankers, politicians, corporate executives, and the billionaire oligarch class. Sting explained his thought process regarding the song:

“I thought that while political progress is clearly important in resolving conflict around the world, there are spiritual (as opposed to religious) aspects of our recovery that also need to be addressed. I suppose by ‘spiritual’ I mean the ability to see the bigger picture, to be able to step outside the narrow box of our conditioning and access those higher modes of thinking that Koestler talked about. Without this, politics is just the rhetoric of failure.”

Sting perfectly captures a fundamental truth of our manipulated society. We have been conditioned through hidden mechanisms wielded by the Deep State, forming our habits, beliefs and opinions as they decree. The ruling class allows the plebs to believe they make their own choices at the voting booth, but they hand pick the politicians and tell you who to choose, at least until recently. Politics is nothing but a rigged game, just like our financial markets. It’s a failure for hard working honest people, but enriches the corrupt chieftains calling the shots.  Edward Bernays revealed the truth about how the world really works ninety-two years ago: 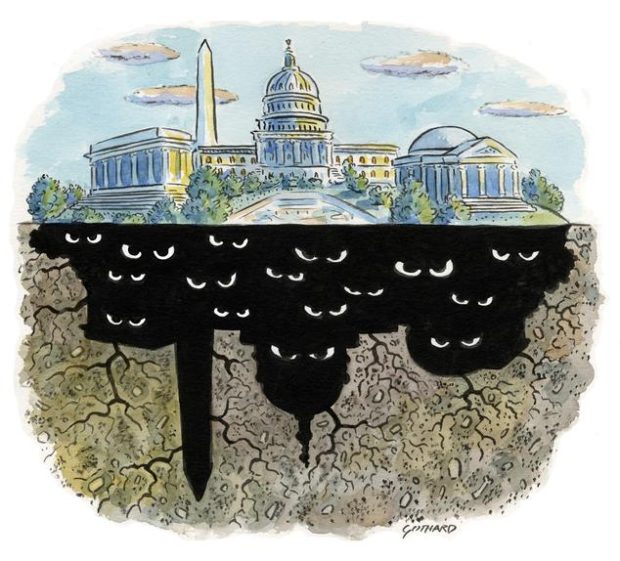 “We are governed, our minds are molded, our tastes formed, our ideas suggested, largely by men we have never heard of. In almost every act of our daily lives, whether in the sphere of politics or business, in our social conduct or our ethical thinking, we are dominated by the relatively small number of persons…who understand the mental processes and social patterns of the masses. It is they who pull the wires which control the public mind.” – Edward Bernays – Propaganda – 1928

We are spirits in this material world. The physical world dominates the thought processes and actions of the majority and it most certainly is all that matters to the ruling class. Only the earthly success measurements matter to those controlling our society. Wealth, power and control over others drives the actions of these arrogant, despicable, evil men. They have no interest in the spiritual realm, the welfare of mankind, or doing what is moral and right. Money and materialism have become the golden calf worshipped by the heathen oligarchs and desired by the common people. We’ve traded the treasure of everlasting spiritual enlightenment for transient earthly mammon. Our culture of greed and celebrating aberrational behavior has sunk to a new low.

Where does the answer lie?
Living from day to day
If it’s something we can’t buy
There must be another way

We are spirits in the material world

There must be another way. We are halfway through this Fourth Turning and answers are few. The questions are many. Humanity’s tendency toward self-destruction is a spectacle which reaches its zenith during Fourth Turnings. Decades of bad choices, living for today, accumulating insane levels of debt, and being deluded by the powers that be, has created a culture of alienation, greed, violence and materialism. The coronavirus pandemic, rapidly spreading across the globe, has the potential to dramatically shift the stranglehold of big business, big government, globalism, and Deep State surveillance over our lives.

Are the ghosts about to conquer the machine? Will the spiritual side of humanity arise once again and defeat the powers of evil who currently control the levers of society? A struggle against dark forces awaits the good people who choose the truth over the lies plied by the corrupt establishment.

The winner-take-all battle between good and evil approaches swiftly. Those with a spiritual basis for their actions will be pitted against those driven by greed, authority and oppression. This coronavirus pandemic, whether biologically weaponized by government authorities to further their agenda of control through fear, or organically formed through genetic mutations in filthy third world countries, appears to be the catalyst which will propel us into the ether of death and devastation, pervasive during the climax of Fourth Turnings. I’ve never been less sure about the future than I am today.

Is the planet about to experience a worldwide contagion that kills millions and brings global economic activity to a standstill, triggering a collapse in outrageously overvalued markets and implosion of the mountain of global debt? Or will the Deep State and their pliable servants utilize standard fear mongering techniques to further enslave a populace insufficiently capable of distinguishing reality from make believe.

The establishment will continue to lie and cheat because they are anchored in the material world and its ephemeral riches. They hate those who do not fall into line and can’t be corrupted by earthly riches. Either scenario will ultimately result in a showdown between good and evil. We all have choices to make. Will we ascend into the light of the spiritual or descend into the darkness of demons?

A complete collapse in trust is on the horizon. The excesses of materialism and greed have reached their zenith. Propaganda, money printing and Trump tweets cannot overcome a global pandemic. The ineptitude of government agencies and cluelessness of government bureaucrats has been on display in China and will be laid bare in the U.S. when the coronavirus continues its rampage across the globe. It will also reveal the propensity of government to act in a totalitarian manner when they are given free rein to control our lives. This virus will expose the fascist nature of our surveillance state and their incompetent response to a life or death crisis on our doorstep.

A crisis where life or death hangs in the balance will force people to focus on the spiritual aspects of life and make choices about what kind of world they want to leave for future generations. As this coronavirus brings our interconnected global just in time economy to a halt and millions once again see their 401ks evaporate, materialism will lose the admiration of the masses and people will begin to realize humanity can only survive and thrive if we adjust our priorities towards liberty, reason, responsibility, and doing what’s right today in order to leave a viable future for our children. The dark clouds of a monster storm on the horizon beckons. We will be forced to make difficult choices. Hopefully, enough people will make the right choices.

Perceptive paleontologist and Jesuit priest, Pierre Teilhard de Chardin’s quote captures the essence of our existence on this earth and our true purpose during our eighty year or so presence in this world: 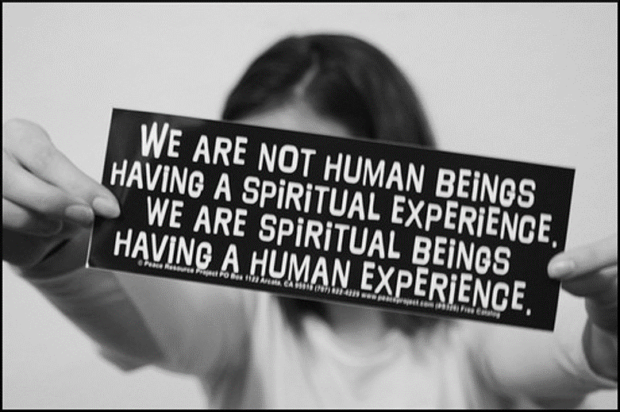 Previous article by Jim Quinn: The Step Down to the Rest of the 4th Turning

Anonymous Sources and the Guys and Gals Who Made the Iraq War a Reality Are Now Claiming That the Kremlin Is at It Again!In an Often Crazy World, Meghan Markle Provides Much-Needed Comic Relief