It is now evident that public health authorities in Wuhan, China are afflicted with a severe form of wintertime coronavirus madness.  This previously unidentified mental affliction began slowly and then spread so rapidly that the National Institutes of Health quietly initiated a study on February 10 to determine the cause of this psychological madness that has targeted the medical profession.  (If you have difficulty believing this, click on the links.)

Early findings of the study point to a form of mania that is more likely to strike physicians and healthcare workers who are wrapped up in hazmat suits or are confined to work in indoor hospital environments 24/7 and therefore have abjectly low sunshine vitamin D blood levels.

Sun deprivation psychosis is known to shrink brain volume.  Those who oversee the so-called coronavirus epidemic in Wuhan exhibit delusionary symptoms, known to be characteristic of this seasonal malady, says a report at PsychCentral.

Recent decisions and announcements made by public health authorities in Wuhan and elsewhere in the northern hemisphere about the coronavirus epidemic can be characterized as various degrees of mental confusion that range from borderline schizophrenia to severe psychosis (totally out of touch with reality).   Here are some examples:

The head of the World Health Organization (WHO), a British Health Secretary and a professor in Hong Kong all warn of a “grave threat for the rest of the world” that “could infect up to 60% of the global population,” while initially the death rate from this 2019-nCoR virus is lower than the SARS outbreak of 2003 that only resulted in a few thousand laboratory-confirmed infections and a few hundred deaths, mostly among immune compromised individuals. 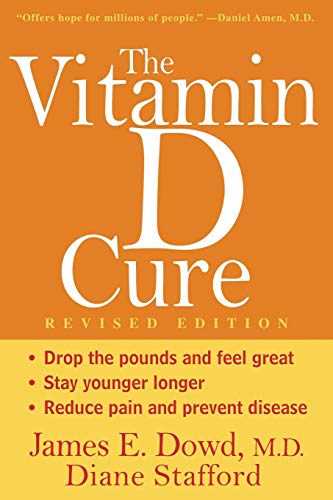 But Chinese health authorities obviously began having hallucinations they turned into imagined reality to portray a more deadly coronavirus outbreak by inclusion of patients whose blood tests were positive for the virus but had NO symptoms among the confirmed cases. Some infection numbers have now been adjusted downward.

When confronted about the low death rate, health officials concede the “death rate may be even lower than expected” (1%) but this is because of undiagnosed cases.   Of course, in every infectious disease outbreak there are undiagnosed cases.  An epidemic depends on how many blood samples laboratories can process to confirm the viral strain involved.  And one would think the mutated 20190nCoR virus is not the only active virus this flu season in Wuhan.  It isn’t, so many people with common cold and flu symptoms in Wuhan and elsewhere around the world are being quarantined before a blood test confirms the 2019-nCoR virus strain.  Any cold or flu symptoms will do.  Drumming up more disease to treat is a good business. 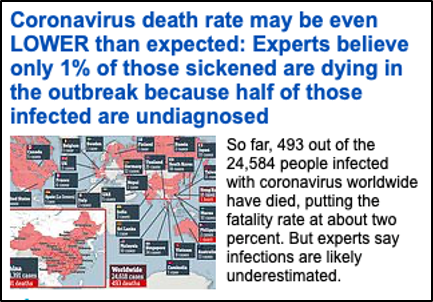 The coronavirus delirium has also jumped to the news media.  Here is a recent report: 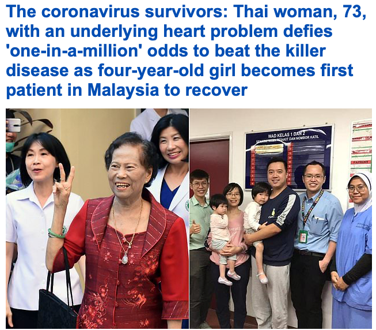 An elderly Thai woman has defied the ‘one-in-a-million’ odds
to survive her battle with the deadly coronavirus that has
struck down almost 25,000 people across the world
and killed nearly 500.
(Daily Mail Feb. 5, 2020)

The coronavirus-infected individuals who are dying are largely immune-compromised smokers, boozers, malnourished seniors, and drug users (even conventionally prescribed drugs); 68% of early coronavirus cases were men which is precisely the exact same percentage of Chinese males smoke tobacco.

Talk about over-kill. It is this same coronavirus-mania that has caused the US military to assemble 11 quarantine camps around major airports in the US despite there being just 13 reported cases among inbound air travelers since the so-called epidemic began.

Not to make light of any deaths, but this is not the pandemic Spanish flu of 1918 that infected one-third of the world’s population and took an estimated ~50 million lives in the pre-antibiotic era which actually may have been triggered or exacerbated by the use of arsenic in pesticides that contaminated foods and subsequently induced widespread zinc deficiency which in turn predisposes virally infected children and adults to severe pneumonia; and the first worldwide marketing of aspirin by Bayer, a fever buster that was overused and unwittingly depleted vitamin C that led to lungs filling up with fluid and patients drowned in their own secretions. 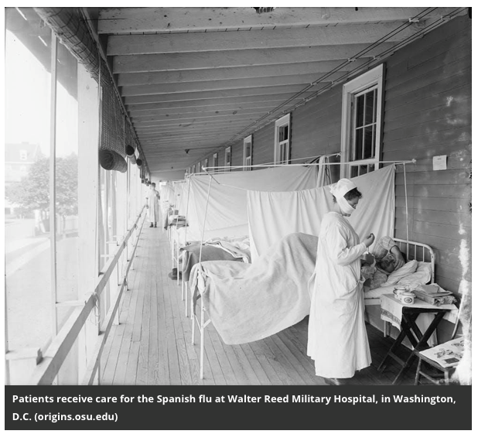 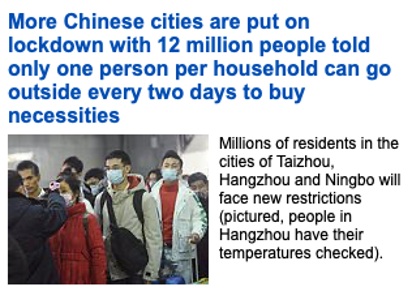 To enflame the viral epidemic, public health authorities have ordered everybody indoors – – quarantining the masses from solar UV radiation that is the natural antidote.

At this time of year the UV-Index in Wuhan is 3-4 on a scale of 1-10.  Mental illness correlates with weakened immunity in winter when the earth tilts away from the sun in northern latitudes.  Maybe it’s time to lock up the overseers rather than the masses.  Winter madness has evolutionary selectivity for the medical profession that largely works indoors.

While there are a number of published studies do not confirm vitamin D pills protect against flu infection, the true test of sunshine-vitamin D is whether it prevents flu-related deaths – namely pneumonia (lungs filling up with fluid).  Vitamin D normalizes an otherwise over-responsive immune system that can fill the lungs with fluid.  Maintenance of adequate vitamin D blood levels DOES reduce the incidence of pneumonia.

Furthermore, it is apparent more oral vitamin D is needed in winter when storage levels of vitamin D in the liver may be depleted.   Due to a statistical blunder, now coined “the big vitamin D mistake,” the public has been mistakenly advised to take an inordinately low amount of vitamin D (equivalent to less than 5 minutes of sunshine/skin exposure).  One clinic that administers 50,000 units of vitamin D to flu-infected patients reports dramatic and rapid resolution of flu symptoms.  Where is the fleet of World Health Organization vitamin D trucks when we need them? 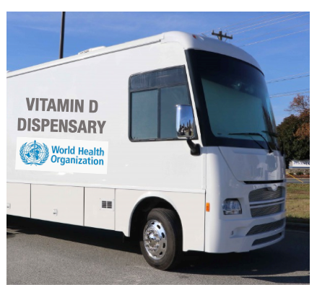 Of course, the masses read news reports of the Chinese doctor who initially sounded the alarm over coronavirus, who was reported to have died.  But now, suddenly, that doctor is alive and said to be in critical condition.  But the photo released (below) shows the doctor wide-eyed and alert with good skin color and holding his I.D. card. 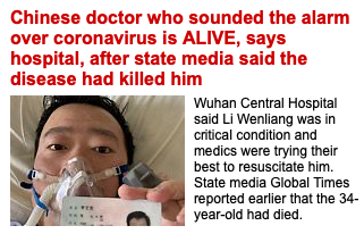 Another example of the mental derangement caused by this coronavirus is a news report that Chinese government authorities “will spray disinfect an entire city.” 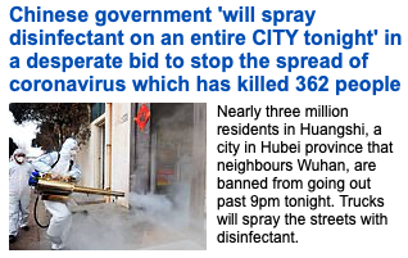 But viruses are not live like bacteria, therefore they cannot be “killed.”  Viruses are globs of genetic material that invade cells inside the body and multiply rapidly using the host cell’s genetic machinery.  The best way to quell a virus is to halt its replication.   But natural remedies that do that, such as quercetin found naturally in red apple peel and red onions, and resveratrol found in grapes and red wine, go unused.  Better to let the deaths continue and wait for a vaccine. 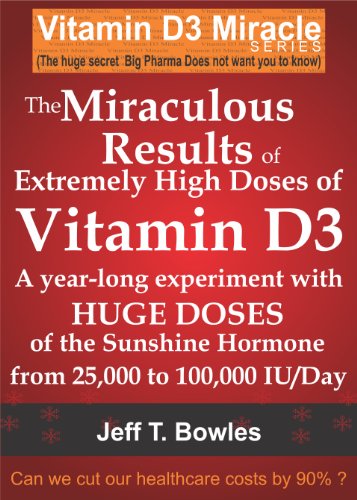 A vaccine is months away and would not likely prevent infections or deaths among immune compromised individuals who can’t efficiently make antibodies against an enveloped RNA virus like the one circulating in Wuhan.  So, vaccination among populations such as in Wuhan would only effectively immunize the healthy who can produce a sufficient antibodies and are at least risk to become infected.

A coronavirus vaccine is expected to prevent 1 infection in 16,666 individuals.  Even with a very low rate of severe side effects from a coronavirus vaccine, one analysis predicts widespread vaccination could hospitalize and kill more people than the virus itself.