While I have reportedly highlighted the many risks of the current monetary policy direction and the multiple distortions that it has created in the markets, in the economy, and even in society, one of the most pressing dangers of the unnaturally low rates and cheap money is the staggering accumulation of debt. Nowhere is this more obvious than in the ballooning corporate debt, especially in the US. It has been growing so rapidly and for so long, that many investors and analysts eventually got used to it, accepted it as a fact of life, and became desensitized to the immense risk it poses to the economy at large. Now, another crucial milestone has been reached and a red line has been crossed, that will hopefully force market participants to finally heed the many calls for caution and the clear warnings that have been falling on deaf ears for years. 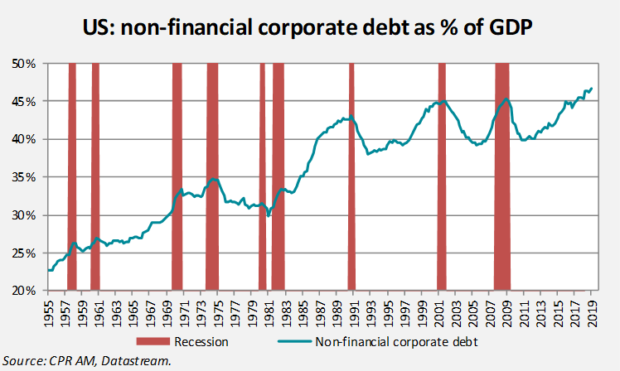 Recent data published by the St. Louis Federal Reserve show that US corporate debt has swelled to nearly $10 trillion, equivalent to 47% of the overall economy, which is the highest level on record. This unprecedented debt accumulation, which has been in the making since 2008 and shows no signs of slowing down, has reached a point where it poses a clear and present threat to financial and economic stability. The force that drives it is obvious too, as the perverse incentives put in place by the long-standing ultra-loose monetary strategy of central bankers have rewarded irresponsible behaviors, as well as encouraged excessive risk-taking and facilitated widespread corruption of the natural price finding mechanisms in the markets. The end results are now plain for all to see: Massive malinvestments and wasted capital, record-breaking asset price inflation and multitudes of debt-ridden and uncompetitive companies on artificial life support.

However, it goes deeper than that. This huge wave of easy money has done a lot more damage than merely encouraging companies to go on acquisition sprees or to spend recklessly on new projects and equipment they might not actually need. It also did a lot more than simply allow them to buy back their own stock with borrowed money to pump up the price or help inefficient and unproductive players survive. If these behaviors and incidents were isolated, there would be little concern over systemic risks or a severe impact on the entire economy. To the contrary, the unprecedented scale and intensity of the current monetary direction has made such phenomena the rule, rather than the exception.

Unrestrained risk-taking became the norm, restrictions on debt issuers were weakened, and junk debt exploded to extraordinary levels. Outstanding high-yield bonds in the US today stand at $1.5 trillion, compared to $700 billion in 2007. Overall, in all publicly traded nonfinancial companies, the ratio of debt to assets stands at a 20-year high, while the leverage levels of heavily debt-ridden companies are near a historical high. This represents a tectonic shift in investors’ willingness to accept much higher default risk in their increasingly desperate search for yield. By doing so, they have also massively increased the chances of a domino effect, once the next economic downturn sets in and the junk debt defaults accelerate and spread. In their latest Financial Stability Report, even Fed officials themselves had to acknowledge that “deteriorating credit quality could lead to sharp increases in risk spreads in corporate bond markets” and that “these developments could amplify the effects of an adverse shock to the economy”. Or, as Peter Schiff put it: “This is a giant house of cards just waiting for something to nudge the table and send the whole thing toppling down.”

It is clear that the Fed and its central banking peers around the world have definitely played a major in creating this monster. However, it is also important to realize that, since these policies aren’t about to change anytime soon, it is up to the individual investor to take note of the risks, adjust their strategies accordingly and get off the current crash course. Furthermore, on a deeper level, what the record-breaking debt levels and the junk bond numbers actually represent is the hordes of investors and speculators sleepwalking off a cliff, overconfident in their central bankers’ ability to postpone the inevitable in perpetuity. What fuels this folly, is both denial and complacency, but also immensurate greed, as many still search for yield, even when there’s simply none to be had; not at any justifiable cost, anyway. This blind eagerness to take on any risk and to pay any price just to remain in a losing game, conjures up the image of a gambler, accepting terrible odds just for the sake of another spin at the roulette.

In stark opposition to all this irrational risk-taking, stand physical precious metals. The stability and security they offer is far more strategically important than the risky pursuit of meager returns. Sure, “gold offers no yield” as the old cliché criticism goes. Indeed, it doesn’t, but at least it guarantees your wealth will still be there when the music stops and the dominoes start falling.

Apocalypse HideoutIf You Are Still Watching Netflix, You Are Part of the Problem