The Christians as the Romans Saw Them, Robert L. Wilken

How did Christianity appear to the men and women of the Roman Empire?  How did it look to the outsider before it became the established religion of western Europe and Byzantium?

These are the questions Wilken intends to answer in this book.  We know the story up until we find John on the island of Patmos, primarily through the book of Acts and through Paul’s letters.  We know the story of Constantine and his adoption of the faith – giving Christianity political authority for the first time.

But what of the story in-between?  How was this sect seen by those in power: a military threat, a political threat, a source for revolution…or no threat at all?  Wilken will answer the questions not by examining the works of Christian authors, but through the observations of pagan observers of Christianity (albeit, we often only have excerpts of these writings captured in rebuttals offered by later Christian apologists).

Pliny called Christianity a “superstition”; Celsus wrote that Jesus was magician and sorcerer.  Porphyry, Julian, Galen and Lucian are also considered.  These authors cover a period of almost three hundred years – from the early second century into the late fourth century.  Wilken does not address if the criticisms are true or not; he is only after presenting the Roman view of Christianity (and “Roman” is meant to include both Roman and Greek authors). 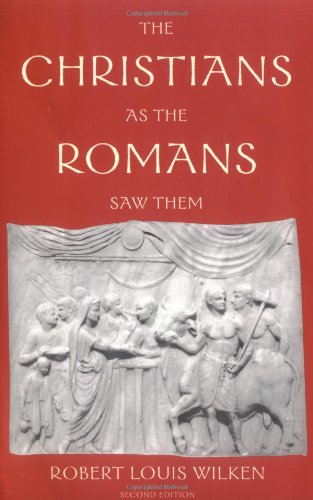 For almost a century Christianity went unnoticed by most men and women in the Roman Empire.

Pliny the Elder (Pliny’s uncle and, later, adopted father) wrote his Natural History a generation after the death of Jesus; in the section on Palestine, there is not a single mention of Christianity.  The first mention of the sect by a Roman writer occurs about eighty years after the beginning of Christianity.  To the extent the Christians were noticed, non-Christians saw the Christian community as “tiny, peculiar, antisocial, [and an] irreligious sect…”

As mentioned, much of what Wilken would find from these authors regarding Christianity comes from Christian apologists in response – these Christian texts have been better preserved.  The debates at the time are the debates many still have today (albeit without even understanding the earlier arguments): creation out of nothing; faith vs. reason; the status and relation of Jesus to God; the historical reliability of the Scriptures.

Early in the second century, Pliny was sent as provincial governor of Bithynia-Pontus, on the northern coast of Asia Minor.  His assignments were numerous: look into irregularities in the handling of funds, examine the municipal administrations, put down potentially political disorders, deal with pending criminal cases, and investigate the military situation.  As can be seen, the sect of Christianity would be considered among a couple of these assignments.

When Pliny wrote of the Christians, he used the same term for club – hetaeria – as he used to described a firemen’s association.  The concern in both cases: would these clubs restrict themselves strictly to professional or social concerns, or would these turn political – eventually revolutionary?

Somewhere between the cities of Amisus and Amastris, Pliny wrote his famous letter regarding Christians.  It is not clear in which city the activities described were occurring – it can only be said that it was one of the coastal cities of northern Pontus.

A group of local citizens approached him to complain about the Christians in the vicinity.  The precise complaint is unknown, but it is possible to infer that the charge was brought by the local butchers: the Christians refused to buy meat for the sacrifice.  Whatever the specific trouble, this was unusual: in most areas of the Empire, Christians lived peaceably among their neighbors.

Although [Pliny] expected to find evidence of Christian crimes, he found none.  He discovered instead that the rites were innocuous. …All Pliny found was a superstition, a foreign cult.

They would meet to chant verses in honor of Christ as if to a god; they would bind to each other by oath – but not for any criminal purpose, as they would abstain from theft, robbery and adultery; to commit no breach of trust.

With all this, he still summoned the accused Christians to confess: a yes answer would result in execution: per Wilken, “Christians were culpable for the sake of the name alone.”  He did not have authority to execute those Christians who were also Roman citizens; their fate is unknown.  Pliny would write: “Whatever the nature of their admission, I am not convinced that their stubbornness and unshakable obstinacy ought not to go unpunished.”

Charges would increase in other cities; anonymously authored pamphlets were circulated, listing dozens of “suspects.”  Pliny would devise a method to better test the confessions: repeat the formula of invocation to the gods; make an offering to Trajan’s statue; revile the name of Christ.  Such a test had few, if any, precedents in Roman history.

Trajan would concur with this formula, and add: “…pamphlets circulated anonymously must play no part in any accusation.”

From such beginnings, Christianity would eventually be able to conquer – for all of the good and bad that came with this – the largest empire in the western world.  But there are still a couple of centuries before this occurrence; these will be reviewed in subsequent posts.

Costs Are Spiraling Out of Control Climate and the Money Trail