The spiritual revolution of the Axial Age had occurred against a backcloth of turmoil, migration and conquest. …Karl Jaspers suggested, “The Axial Age can be called an interregnum between two ages of great empire, a pause for liberty, a deep breath bringing the most lucid consciousness.”

The Great Transformation: The Beginning of Our Religious Traditions, by Karen Armstrong

Armstrong closes her book with a look at the way forward – actually beginning with the close of the Axial Age around the second century BC until today.  She captures what she views as our problems and identifies common characteristics from the Axial period that could be applicable today.  I will focus on her discussion of the Jewish and Christian transitions.

As an aside: It has struck me, however, that we are also in the middle of a period of turmoil, living through the end of one great empire to be followed by…what exactly?  In other words, are we entering a time that might provide soil for a new Axial period – a pause for liberty?  I don’t know, but it’s a thought. 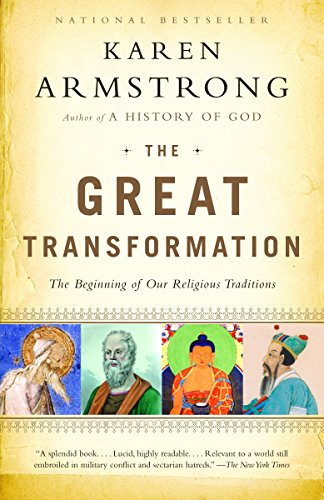 Armstrong looks at the legacy and possibilities of each of the four traditions surveyed in the book.  When it came to the legacy of the Hebrew tradition, she spends the first several pages on the Jewish – not Christian – legacy.  By AD 66, Rome worked to squash a rebellion by Jewish zealots that lasted, eventually, four years.  In AD 70, Vespasian conquered Rome and burned the temple to the ground.

The most progressive Jews in Palestine were the Pharisees:

Armstrong notes a Rabbi Hillel, who taught that the essence of the Torah was not the letter of the law, but the spirit – which is summed up in the Golden Rule.  It appears he lived during the time of Christ; he doesn’t sound like one of the Pharisees that Jesus ran into.  He offered:

“What is hateful to yourself, do not do to your fellow man.  That is the whole of the Torah and the remainder is but commentary.  Go learn it.”

The Golden Rule, compassion, and loving-kindness were central to this new Judaism.  Hillel viewed the preservation of the religion as more important than national independence, but the Zealots would have none of it – with the consequences as noted above.

Kindness was the key to the future. …When two or three Jews sat and studied harmoniously together, the divine presence sat in their midst.

Rabbi Akiba was killed by the Romans in AD 132:

[He] taught that the commandment “Thou shalt love thy neighbor as thyself” was the great principle of the Torah.

To show disrespect to any human being created in God’s image was seen as a denial of God himself.  You could not worship God unless you practiced the Golden Rule.

In Rabbinic Judaism, the Jewish Axial Age came of age.

Now, if you’re like me, you are thinking… “wait a minute, you skipped right over the time of Christ, and much of what you are writing is also attributed to Him.”  Further, in the big picture, who has had more impact on delivering these Axial traditions: Christ or a couple of Jewish rabbis?  Well, Armstrong comes to this.  Describing Jesus as a “Galilean faith healer,” she sees Christianity as a first century movement that tried to find a new way to be Jewish.

By “son of God,” nothing more is meant than someone assigned a special task by God, enjoying a privileged relationship with Him.  Many of His sayings were similar to those of the Pharisees.  (It sure didn’t sound like it when He was alive.)

Armstrong closes with an exhortation to follow the Golden Rule, and that all of these Axial religions and their offspring aimed at this – which is quite true, to my understanding.  She rightly points out that in all these faiths, men have fallen short of these high ideals – also quite true.

She ignores the reason that it is in the West where the Golden Rule has been most effective.  She ignores why it has lost its prominence – it is because, as Nietzsche’s madman offered: men have forgotten God – that would be the Christian God to which the madman referred.

I would say it is a disappointing conclusion, but it is about what I expected.

The Impeachment Deal The Cost of America’s Cultural Revolution