Sidney Powell, Gen. Michael Flynn’s replacement lawyer, is pulling on a thread that is unraveling the conspiracy to generate a crime with which to bludgeon him into cooperating in incriminating President Trump in the Russia hoax.  Late yesterday, The FBI made an admission — or claim — that strains credulity: that it has for years misattributed authorship of the notes used in preparing the Form 302 interview summaries that were themselves altered to incriminate Flynn.

#VanGrack just advised by letter that he got the authors of the raw notes backwards!! Since March 2018 when first disclosed! All the more reason to require originals of everything without redactions, handwriting samples, all 302s, audit trail, metadata-entire file! @GenFlynn pic.twitter.com/kewKKizUAK 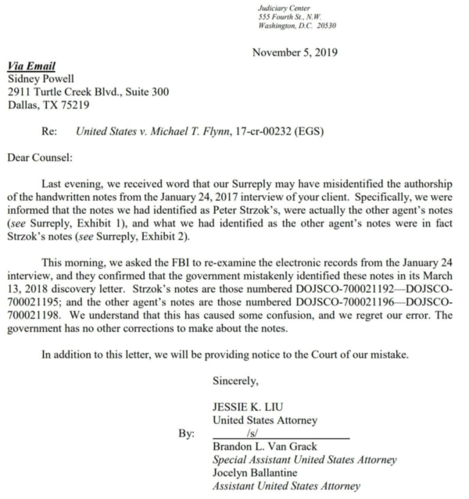 The entire FBI case against Flynn; meaning the central element that he lied to FBI investigators (he didn’t); is predicated on the FD-302 interview reports generated by the two FBI agents; later discovered to have been edited, shaped and approved by Andrew McCabe….  And for almost two years the entire outline of their documented evidence has been misattributed? (snip)

Obviously what triggered this re-review of the notes was a smart sur-surreply from the defense that highlighted how Peter Strzoks notes were far too neat, organized and well constructed to have been written during an actual interview. [SEE HERE]

For the prosecution to now reverse course and say the agent attribution was transposed, is either the biggest screw-up in a high profile case…. OR, the prosecution now needs to reverse the note-takers due to the exact, and common sense, reasons highlighted by the defense.