This is clearly not “winning so much you can’t stand it”.

During the 2016-2017 market year which the Donald inherited, the US got the lion’s share of China’s soybean imports, taking nearly 60% of the total compared to Brazil’s 31%. And that was pretty much in line with the historical trend.

Needless to say, the green bar for the October 2018 to May 2019 period shown below is not a green shoot of progress. Brazil snagged 75% of China’s soybean buy because the stable genius and un-paralled deal-maker in the Oval Office decided to turn the US grain belt into trading bait in his attack on China’s $443 billion trade surplus with the USA. 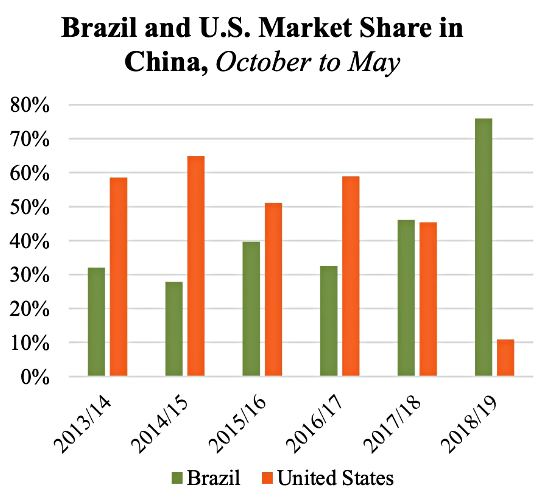 Nor is it only a case of vanishing U.S. soybeans exports. During 2016 the US exported $25 billion of total farm products to China including grains, oils, meats, forest products and even fish, ethanol and biodiesel. Yet by 2018 that total had dropped to less than $13 billion, and was far below the peak levels of nearly $30 billion reached back in 2013.

So when the Donald tweeted the Greatest Deal Ever for farmers after his meeting with Vice-Premier Liu He last Friday, people knowledgeable about the farm trade with China were surely overcome with guffaws:

“The deal I just made with China is, by far, the greatest and biggest deal ever made for our Great Patriot Farmers in the history of our Country,” he said. “In fact, there is a question as to whether or not this much product can be produced? Our farmers will figure it out. Thank you China!”

The second bolded sentence about the limits of US production capacity is about the only point he got right. In fact, the $40-50 billion of farm purchases the Donald touted are not going to happen in a month of Sundays. We will be lucky, in fact, to regain the $30 billion peak of six years ago.

As is evident from the chart covering the last 18 years, the overwhelming bulk of farm exports to China has been accounted for by grains (red bars) of which soybeans accounted for more than 90%. But having put Brazil in the drivers seat during the past 18 months, clawing back the historical US market share shown above won’t be easy, but even if Beijing makes a deal to force feed its domestic market with US soybeans it really won’t amount to, well, a hill of beans in the bigger picture.

We are referring to the fact that farm exports are totally fungible on the global market. The overwhelming share (85%) of the $59.3 billion of soybeans exported to world markets in 2018 were accounted for by Brazil at $33.2 billion and the US at $17.2 billion. The next two largest exporters were Canada and Paraguay with barely $4 billion between them.

So were there to be a negotiated political settlement under which China boosted its US soybean buy from last year’s $4 billion to say $15 billion, it would only result in the swapping out of end markets between Brazil and the US. That is, approximately $11 billion of Brazil’s $27 billion of soybean exports to China last year would end up in other Asian and European markets, while virtually all of US soybean exports would be shipped to China.

The same is true of the potential for beef and pork export increases (purple portion of the bars).

So again, the fungibility equation would come into play. Since the year 2000, combined US beef, pork and poultry production has risen by only 1.1% per annum, meaning that total supply is not likely to get up on its hind legs and suddenly leap higher.

Instead, if China’s beef and pork imports were to quadruple from say $1.8 billion to $8 billion, most of that gain would come out of current US exports to Japan, South Korea and Mexico. In turn, the latter would likely be supplied by other US meat export competitors who would be displaced from China (e.g. Argentina).

In short, the Donald’s $40-$50 billion of farm export to China is a pipe dream, but also would mainly involve a recouping of China markets the US has recently lost owing to the Donald’s Trade War and a politically driven reshuffling of supplies currently on the global farm export markets.

What that would do for US agriculture in the longer-run is hard to divine, but meanwhile the US taxpayers will soon be permanently on the hook for the upwards of $50 billion that the Donald has borrowed in order to subsidize US farmers for the inconvenience of being thrown under the bus. 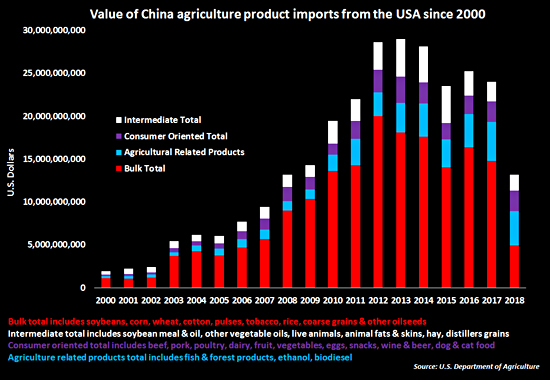 Given the fact that that this flaky farm exports piece was the only tangible component of Friday’s unilateral announcement by the Donald, once again there is far less to Friday’s ballyhooed Phase 1 deal than meets the eye. As Bloomberg noted,

The US and China have emerged from last week’s talks with different takes on what’s in the accord and how close they are to signing a document. Trump said “we’ve come to a deal, pretty much, subject to getting it written” and indicated it might take several more weeks of negotiation. China’s Ministry of Commerce merely said that “the two sides have made substantial progress” and “agreed to work together in the direction of a final agreement.” The state-run Xinhua news agency didn’t mention a deal either.

There is no meaningful break-through in the US-China trade war. It is a cross between a stay of execution and a publicity stunt. Nothing has been signed and there was no joint communiqué after Chinese plenipotentiary Liu He visited the White House.

That’s because the only thing that it can do with the $4.3 trillion of US two-way trade and the $20 trillion of merchandise flowing through the global export markets is to throw some domestic producers and consumers under the bus – even as it invites the jackals of K-Street to extract concessions and benefits for special interests that have the money and political clout to effectively lobby the Washington Trade Nannies.

For instance, the Donald also promised that China had agreed to open its financial services sector to US. firms.

That is, the big six US banks had more than a half trillion of combined revenue and $120 billion of net income, yet the Donald has thrown bus drivers in Minneapolis (and throughout the US) under their own busses so that these predatory creatures of the state can more easily nose their way into the Red Ponzi – an economy that is going to blow sky high during the next decade, anyway.

And believe us, without the Fed’s largesse, the Big Six banks would have disappeared during the last crisis or would not be a fraction as profitable if they had to capitalize an at-risk balance sheet with honest high-cost capital on the free market.

The same goes for the Donald’s promise that the Red Rules of China with respect to technology transfers might be relaxed for big US companies investing there. That is, companies that want to invest in China so that they can brag on CNBC that they have a “growth strategy” and deserve a nosebleed multiple and the bloated stock options values that go with it.

The fact is, if foreign jurisdictions allegedly treat American capital or exporters badly – so what?

The right answer is for them to invest in nations which treat them better or live with the local rules.

After all, the consumption dollars and the work hours and production talents that American citizens bring to the US economy belong to them, not the politicians and policy-makers on the Potomac. They are not pawns or economic bargaining chips to be thrown on the table by Washington negotiators – whether they be incompetents like the Donald or otherwise.

Moreover, the odds that policy-makers subject to the hideous money politics of present day Washington could possibly add net value to the US economy from global trade beyond what the free market would produce on its own are somewhere between slim and none.

That’s especially the case with respect to the intellectual property theft purportedly carried on by Chinese companies and government agencies. For crying out loud, “reverse engineering” is not a crime or an economic sin; it’s what every aggressively competitive company does to the products of its competition.

And it’s also why business firms pay good money for competent legal counsel – so that in replicating and besting products already on the market they stay outside the four walls of any relevant patents which may be at issue.

Indeed, the entire intellectual property theft meme is just a scam under which the business lobbies have enlisted the FBI and other law enforcement branches to function as taxpayer-financed patent attorneys and litigants.

But that’s not the state’s job at all: Enforcement of intellectual property rights is a cost of doing business that should be born by patent owners; and not, again, by the proverbial bus driver shopping at Walmart’s and finding the cost of his tariffed necessities rising because some company in China is allegedly stealing trade secrets.

Of course, the ultimate case of Trade Nannyism is the perennial whining by the K-Street lobbies that nefarious trade abusers like China “subsidize” their exports.

Why, yes, they surely do…..send foreign aid to American consumers, that is!

To the contrary, if you want to level the playing field for American producers and manufacturers, instruct the Fed to stop targeting 2% inflation, and, in fact, to get out of the way entirely so that the domestic economy can deflate its high prices, wages and costs and thereby become more competitive on the global markets.

At the end of the day, the only “trade policy” America really needs is the natural workings of the free market. For instance, last Friday’s White House confab focussed on China’s stricken hog herd and the potential for considerably stepped-up US pork exports.

But then again, we didn’t need a Trade War with China and a daily tweetstorm from the Donald to uncover that particular opportunity. That’s what markets do all on their own.

Swine fever has destroyed 100 million pigs in China. The national herd – half the global stock – has fallen by 32pc. The state is releasing supplies from its strategic pork reserve but these are dwindling fast. Pork prices have doubled since July (to 33 yuan per kilo).