Have The Bankers And Politicians Taken America to The End of Its Financial Rope?

What if you woke up this morning to hear news reports that the U.S GDP (gross domestic product) is in decline for the first time in decades?  The GDP is a number world economies use as a bellwether.  Where the U.S. economy goes, so goes the world.  (Given that the Post WW I & II rearrangement saw to it that the U.S. would have high incomes to produce a consumer economy and most of the rest of the world would be a supplier economy with low incomes to provide cheap products to the U.S.)

But a noted economist says the GDP has actually been flat for several years now, a fact that has remained hidden from the public. (GDP being the total value of goods produced and services provided in a country during one year.)

Below is economist John Williams (ShadowStats.com) chart showing the U.S. has been in a prolonged recession. (A recession is defined as two consecutive quarters of declining economic performance.) 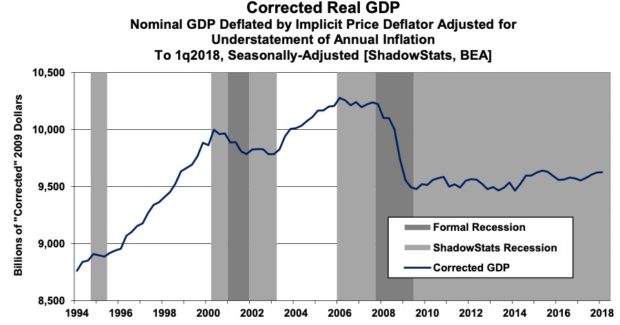 Here (below) is the St. Louis Federal Reserve Bank positive spin on the continued growth of the GDP for comparison.

Negative GDP dip might send such a chilling message to Americans that they stop buying consumer goods, cars, even homes, even though they don’t know much about it.  So, it appears GDP numbers are rigged to show slight increases every year so consumers are not rattled into retrenching their spending.

A decline in spending (velocity of money)

Almost 2/3rds of consumer spending is on services with the remaining third on goods. The decline of an aggregate measure of American productivity would instinctively put every consumer on notice to tighten up spending.  Consumers might just hold on to their money or pay down debts on credit cards rather than go on a spending spree. That is what they did with their tax refund checks earlier this year. 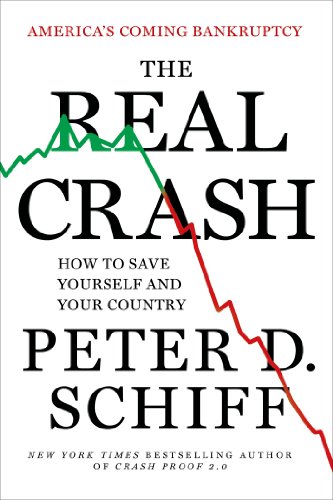 Williams predicts in his Flash Oct. 21 Update #12, the “sharpest quarterly decline in the velocity of money for 3rd Quarter 2019 since the depths of the Great Depression.”

Should the President be totally candid about the economy?

The answer to that question is no, unless he wants to start a worldwide run on the banks.

We should expect the President to put a positive spin on the economy even in dire times.  We don’t want panic to set in and be a self-fulfilling prophecy.

Phony financial numbers have been part of the ongoing camouflage for a declining economy.  And since the economy, at its roots, is based upon public confidence in currency and consumer sentiment, it would be irresponsible not to put a happy face on the economy, if for no other reason than to prevent a run on the banks.

Why the President needs a $1 trillion boost in the economy (and why isn’t Congress helping him?)

Fixing this debt problem appears to be a one-man effort these days.  Congress doesn’t show any interest.

President Trump is embroiled in a trade war with China to reduce a $500 billion imbalance of trade that negatively affects GDP.  Here’s why the President is picking a fight with China.

Why does the U.S. need such a big correction in its foreign trade imbalance?

The Congressional Budget Office reports tax revenues of $3.5 trillion and $4.4 trillion in spending, for a -$900 billion false boost to the economy.  Without that debt boost (akin to borrowing money to pay your credit cards), the GDP would tumble.

President Trump needs a big fix to the economy, a $1 trillion fix.

This trade spat with China may be a temporary reason why the GDP doesn’t look so good. Tariffs on imports are in play.  But China seems to be waiting out President Trump for the next election, hoping U.S. voters will elect another candidate who can improve the economy.  China as a foreign government can influence the next election by dragging its feet at the negotiation table. Will the voters understand?  The opposing political party certainly won’t.

Financial commentator and analyst Chris Hamilton, writing at economica.blogspot.com, says without the federal government spending more than it takes in in tax revenues, the GDP would shrink every year!  Good God, the U.S. is only growing by the amount of debit it mires itself in.

This is why the U.S. must grow its way out of this mess.  And that is why a decline in the growth of the U.S. economy suggests the U.S. may have to trim spending by at least a trillion dollars, which would mean severe cuts to the military or Social Security that would increase unemployment and thrust retirees into poverty.

A lot of people want the economy to spiral downwards to oust Trump from a 2nd term in office.  So, the phony financial numbers may finally come out of hiding.

Gross domestic product (GDP) in the third quarter running from July to September is forecast to fall to about 1.4% from a 2% pace of growth in the spring (2019) … Historically the U.S. has grown more than 3% a year, but the last time it reached that mark was in 2005. Most economists think the U.S. can grow no faster than about 2%, at least not for any extended time.”

Economist John Williams, writing at ShadowStats.com, confirms “3rd Quarter 2019 GDP has slowed to around 1.5% from the current reported 2.0% annualized growth in the 2nd Quarter of 2019.  Initial quarterly economic growth are estimates.

What happens when a surplus fund can’t buy any more U.S. Treasury notes?

If the U.S. keeps borrowing and digging a deeper debt hole, who is going to buy U.S. Treasury bills to fund this debt spending?

Chris Hamilton also reveals another upcoming crisis point.  Because overseas trading partners don’t foresee a day when they will ever be paid back on their U.S. Treasury notes they possess, they have backed away from buying U.S. debt.  So intra-government entities (the Social Security surplus fund) have been buying these debt notes.

But Hamilton reports Social Security’s surplus has declined by 90% (from over $200 billion/year in 2007 to perhaps $20 billion this year (2019).  At some point in the near future Social Security surplus will not be able to be a “buyer” of U.S. debt.  Some $2.9 trillion of Social Security reserves (really just IOUs, there is no real money in there) must begin to be accessed to deliver pension checks to retirees.

Pushing financial Armageddon down the road

I have written some of the many published volumes about the impending financial collapse of the U.S.  Those predictions, offered by many others as well, were papered over.  A financial Armageddon has been perpetually pushed off to another date in the future.

In 2012 Senator Tom Coburn, in his book entitled DEBT BOMB, predicted a day when Japan and China kept its profits from selling products to the U.S. and didn’t buy U.S. treasury bonds in return.  That day is upon us.  Fewer and fewer potential overseas buyers of U.S. debt want to lend to a country that doesn’t appear it will ever be able to pay it back.

There is ~$13 trillion in long-term U.S. savings accounts that are being eroded by a low rate of return (less than +1% interest) and ~6% inflation.  A massive bank run would wipe out reserves that banks use to balance their books and meet minimum reserve requirements.  Of course, banks would shut their doors before allowing a bank run to get started.

“The numbers underreport the severity of the U.S. government’s fiscal circumstance. Even as reported, though, the numbers are not just unsustainable, they remain uncontainable. Taxes cannot be raised enough to put the annual results in the black, and the level of program slashing needed in Social Security, Medicare, etc. to reduce costs appears to be well beyond the scope of any foreseeable political will in Washington.”

At the end of our debt rope, would America think of the unthinkable?  Wise economists of old knew how to clear their accounts – debt forgiveness, something anathema to modern banks.

Economist Martin Armstrong says the U.S. would be better off if it stopped borrowing money from whomever and just printed electronic money into existence.  That way at least there won’t be any interest due on that money.  The U.S. now pays $574 billion a year on interest alone for the national debt.  Americans would be spared from making that interest payment every year and getting nothing in return.

A ‘Red Army of Mediocrities’Is Trump Facing a 1960s-Style Revolt?