Last year I asked whether Turkey would be “City Zero in Global Contagion.” That question was based on the crisis unfolding in the Turkish lira which materially threatened a number of major European banks, especially those in Italy.

This week highlighted something really interesting for me that, I think, sets in motion a similar thesis about Turkey but for much different reasons. The sovereign debt crisis will come about purely because of a failure of confidence in institutions.

Competence is the key to staying at the top of human dominance hierarchies, not force. Those built on competence tend to last and those built on force are, at best, meta-stable for a specific period of time.

The difference between what’s happening in Turkey with President Erdogan taking control of the Turkish central bank and the end of Mario Draghi’s term heading the ECB cuts to the heart of this issue of competence versus force.

Draghi has projected this aura of the ever-in-control competent manager of Europe’s finances while steadfastly holding to policy ideas which have done nothing but destroy capital formation within the Eurozone.

His last statement and policy decision this week are emblematic of his inflexibility both intellectually and politically. And it’s clear that he’s trapped at whatever negative-bound he’s got in his head, handing off a Europe on the verge of collapse to his sister-in-tyranny, Christine Lagarde.

Draghi just fired his “Cheap Money Bazooka” on his way out the door to kick the can down the road another few months.

He’s setting the stage for the full-blown monetization and collapse of the European banking system under his successor, former IMF chief Christine Lagarde. What hasn’t worked for Europe for the past 11 years was just introduced again as the only way to save the situation.

Draghi’s bazooka will be a dud and expose the European bond markets as the massively over-bought time bombs they are. We’re seeing big moves to the upside in European rates since his press conference yesterday morning.

When you project fear onto the markets, don’t be surprised when the market picks up on that and the momentum players who have been front-running Draghi’s last policy announcement abandon those markets and look for new waters to chum.

The proof of this was the unexpected reaction to the upside in the euro and the huge sell-off in Euro-bonds that began on Wednesday and gathered steam after Thursday’s policy unveil.

German Bunds are in danger of throwing massive reversal signals across the yield curve, I think is the biggest tell. 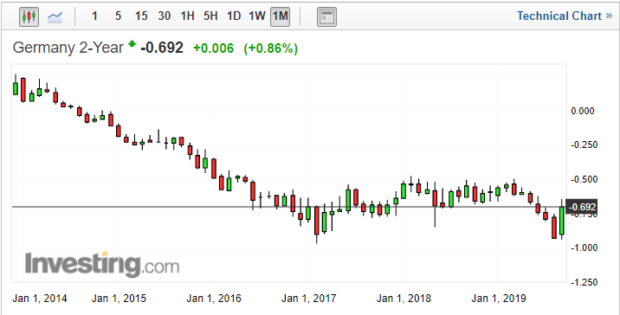 What’s important to see here is that

Martin Armstrong consistently, and rightly, makes the point that for a turn to occur in a market you have to get a majority of people on the wrong side of the trade. In this case too many longs crowded into over-priced German debt.

Once there are no more greater fools to sell to, the shorts take over, the longs get routed and the market reverses quickly.

What leverage giveth on the way up, takes away just as fast on the way down.

The willingness to believe such inane drivel boggles the rational mind, to be frank.

But this is how markets reverse. This is how crises develop, slowly and then all at once. Because meta-stable systems based on force don’t last.

And the euro has been held together for the past year through very public political machinations to betray sovereign governments, like Italy and the U.K.

Now, back to Turkey.

Last year, with the formation of the now erstwhile Euroskeptic alliance between The League and Five Star Movement in Italy, the huge dollar-debt problem and currency crisis in Turkey, Italy seemed ripe for a potentially explosive blow-out of sovereign debt yields, because of it’s exposure.

That, obviously, has not occurred as the European Central Bank and the markets likely conspired to find new ways to keep Italian debt yields at manageable levels, mostly by getting the Japanese to buy Italy’s junk.

And deteriorating economic and political conditions have created the Mother of all safe haven trades, which euro-debt benefited from greatly.

They did this while plotting out an opportunity for a coup against Salvini to consolidate power in Rome and take Italy’s nascent revolt against Brussels off the table.

But it was Erdogan’s commandeering the Bank of Turkey and immediately lowered rates from 30% to 24%, going against the IMF recommendations (while also telling Lagarde to go pound sand), which stabilized the lira.

It didn’t hurt that he got a lot of help from his new friends in China, Russia, Iran and Qatar. But, the main point is that Erdogan called bullshit on the whole IMF austerity business to get Turkey onto its version of debt slavery.

So on the same day that Draghi doubled down on NIRP/QE/BBQSAUCE, throwing more savers down the rabbit hole of wealth destruction, Erdogan continued lowering rates, this time 3.5% to 16.50%. He simply following inflation down and projecting strength and confidence in the Turkish people’s ability to weather this and get things moving forward quickly.

What men like Draghi fear the most is everyone finding out he’s an evil man hellbent on subjugating Europe to perpetual rule by their betters. It’s that fear that animates Remainers in the U.K. and on the European Council in Brussels.

What if the U.K. thrives after a No-Deal Brexit? What happens to confidence and where do you think capital flows?

These are the things that keep these people up at night. And it looks to me that when someone as unsophisticated as Erdogan can do a better job of steering his country through a currency crisis than the people we pay fealty to their wisdom and insouciance, you have the makings of a real crisis of faith.

This is not about teaching us plebes and muppets this lesson. We already get that these people are incompetent, that’s why gold and Bitcoin are trading where they are. That’s why Brexit, Hungary, The League, AfD, Trump and Catalonia are even things.

But, ultimately, we don’t move markets. We get trapped at the tops and sell the bottoms because we get sucked into the fantasy we can beat them at their own game.

It’s about moving the opinions of fund managers, family office heads and pension fund boards. They are the ones that swim in these waters. We retail folks are their playthings, unfortunately.

And when that happens, when we see that revolt occur (sell off in German Bunds anyone?) that’s when things get real.

And we know how the EU responds when things get real. They lie.

The end of cash, a crypto-version of the SDR, and a social credit system to unperson anyone who steps out of line.

It will be the countries that remove themselves from this system that best survive that last attempts to buck a trend whose time has come.

The World’s Most Important Political PrisonerWhat a Relief that the U.S. and Global Economies Are Booming.