JFK warned the citizenry about “an announced need for increased security” that would be “seized upon by those anxious to expand its meaning to the very limits of official censorship and concealment.” Today, this is known as “national security,” and it’s a term used to justify unethical and enormous amounts of secrecy that do not protect the public, but protect those in power and their corporate, financial and political interests.”

This is exactly what Julian Assange did, and many others have and are doing, like independent alternative media outlets.

Transparency is what Julian Assange was all about, and the American empire, or more so the global empire, has been desperate to keep its secrets and prosecute anyone or anything that threatens their secrecy. That’s what this is all about. And they proved that with Chelsea Manning.

It’s not just people like Assange who are being demonized and hunted, it’s alternative media as well. The war on ‘fake news’ that’s been happening for the last little while has forced alternative media outlets that are presenting credible information to be deemed as ‘fake.’ Any media outlet who even questions a controversial issue has been made out to be ‘wrong’ or ‘fake.’ Who has been hired to do this work? One example is news browser extension NewsGuard, which promises to help readers pick out fake news. However, NewsGuard is funded and run by individuals tied to the CFR, Atlantic Council, and other prominent elite figures.

Below is a tweet from Australian journalist and BAFTA award-winning documentary filmmaker John Pilger, who made comments last month that shed some light on how Assange is being treated. 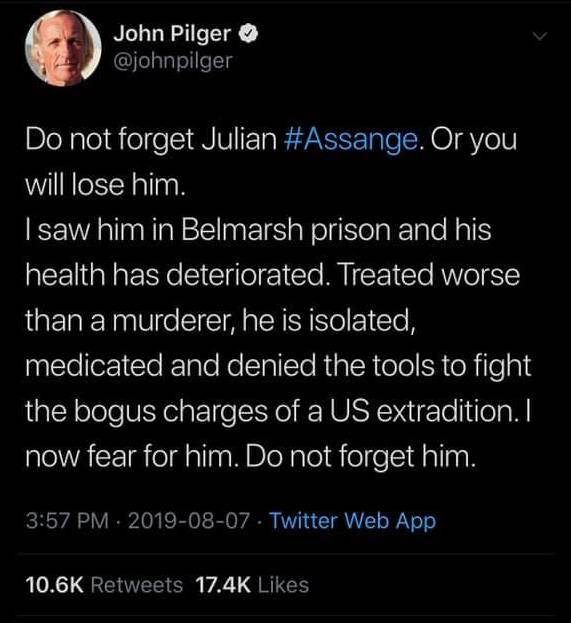 I recently came across a post written a few months ago by Karen Kwiatkowski.

The FBI, Pentagon, and CIA are “interviewing” Assange. Kwiatkowski writes:

Interviewing is the wrong word.  I’d like to say doctoring him, because it would be more accurate, except that word implies some care for a positive outcome.  Chemical Gina has her hands in this one, and we are being told that Assange is being “treated” with 3-quinuclidinyl benzilate, known as BZ.

BZ is a powerful drug that produces hallucinations.

“Soldiers on BZ could remember only fragments of the experience afterward. As the drug wore off, and the subjects had trouble discerning what was real, many experienced anxiety, aggression, even terror,” the New Yorker reported. “…The drug’s effect lasted for days. At its peak, volunteers were totally cut off in their own minds, jolting from one fragmented existence to the next. They saw visions: Lilliputian baseball players competing on a tabletop diamond; animals or people or objects that materialized and vanished.”

It is difficult to know if the state is more sociopathic or more psychopathic.  What US government employees and/or contractors are currently doing to Julian Assange, and those who may have used Wikileaks as a journalistic avenue, may indicate it is the latter.  Torture, isolation, brutality, and the use of psychotropic drugs during interrogations and hiding this from the defendant’s own lawyers by denying them access — this is Lubyanka in the 1950s, not London and DC in 2019.

Allow me to get to the point.  The latest word I have received from England is as follows:

“[Julian Assange] is presently under close observation in prison hospital because he has suffered ‘severe transient psychotic episodes.’ My source(s) indicate these episodes occurred after two sessions of coercive interrogation at the hands of UK and US officials. The source(s) stated the HUMINT interrogators used psychotropic drugs in the course of the sessions.”

There are no words.  Nothing can be said.  2 plus 2 does equal 5.  The FBI is our own special Cheka.  The CIA Director’s hands are wet and her organization does not serve American values.  Rather than choosing to stay secretive for national security, the modern CIA must stay secretive in order to survive, because it has become functionally illegal.  Our president, who puts America first, is putting American values last, even as he tweets his concern for freedom of speech.

The agenda is to destroy Assange as a human being, and they may well succeed.  In doing this evil deed, in all of our names, America herself – whether we put her first, last, or somewhere in the middle – will have dug her own grave.

I came across an interesting post by activist Greg Bean. In it, he brings up Johannes Gutenberg, the man who first introduced the printing press to the world.

He writes about how that single act created a free press, which gave birth to the concept of freedom of speech, and how the two are “inextricably linked; printing is a form of speech.”

The broad circulation of information, including revolutionary ideas, in many languages, undermined Latin’s dominant status and the authority previously held by those trained in Latin, it transcended borders, threatened the power of political and religious authorities, increased literacy breaking the monopoly of the literate elite on education and learning, and bolstered the emerging middle class. It increased cultural self-awareness and cultural cohesion and undermined the authority of distant rulers and high priests.

WikiLeaks’ threat to the powerful was recognised and every effort was, and is, being made to criminalise anonymous leaking, which would be akin to criminalizing Gutenberg’s printing press, but there is not much chance this criminalisation will succeed.

I suggest you read the full piece as it makes some very interesting points.

What you read here is no surprise, for a long time Julian Assange was allowed no visitors, and now, it’s quite clear why. Those who have had access to visits have made it quite clear that he is in very poor health. It’s unbelievable how the powers that be can simply do as they please, illegally, with no consequence, and their power lies within the human population and in those who have been subjected to perception manipulation, believing that Julian Assange should actually be locked up and done away with.

A great quote by Edward Bernays, who was known as the father of public relations, comes to mind here:

The conscious and intelligent manipulation of the organized habits and opinions of the masses is an important element in democratic society. Those who manipulate this unseen mechanism of society constitute an invisible government which is the true ruling power of our country. We are governed, our minds are molded, our tastes formed, our ideas suggested, largely by men we have never heard of. (source)

The ability for this powerful group to manipulate our minds is clearly fading, but we still have a lot of work to do.