It’s no secret that vaccines are not completely safe for everyone, it’s clearly not a ‘one size fits all’ product, and that’s evident by the fact that nearly $4 billion has been paid out to families of vaccine injured children via the National Childhood Vaccine Injury Act (NCVIA). As astronomical as the monetary awards are, they’re even more alarming considering that only an estimated 1% of vaccine injuries are even reported to the Vaccine Adverse Events Reporting System (VAERS).

If the numbers from VAERS are correct – only 1% of vaccine injuries are reported and only 1/3 of the petitions are compensated – then up to 99% of vaccine injuries go unreported and the families of the vast majority of people injured by vaccines are picking up the costs, once again, for vaccine makers’ flawed products. According to a MedAlerts search of the FDA Vaccine Adverse Event Reporting System (VAERS) database, as of 2/5/19, the cumulative raw count of adverse events from measles, mumps, and rubella vaccines alone was: 93,929 adverse events, 1,810 disabilities, 6,902 hospitalizations, and 463 deaths.

The information above is something I’ve shared multiple times in multiple articles, backed up by sources. The idea that vaccines are completely safe for everyone is a narrative that runs rampant throughout the mainstream and within the minds of most people. Furthermore, many people have been made to believe that unvaccinated children are actually a threat to vaccinated children, and that all should be vaccinated to achieve herd immunity. The main motivation behind compulsory vaccine initiatives is “herd immunity.”

The idea is that the more people that are vaccinated, the more protection there will be for the whole. The public health establishment borrowed the herd immunity concept from pre-vaccine observations of natural disease outbreaks. Then, without any apparent supporting science, officials applied the concept to vaccinations, using it not only to justify mass vaccinations, but to guilt-trip anyone objecting to the nation’s increasingly onerous vaccine mandates as well.

An analysis in the Oregon Law Review by New York University (NYU) legal scholars Mary Holland and Chase E. Zachary (who also has a Princeton-conferred doctorate in chemistry), showed that 60 years of compulsory vaccine policies “have not attained herd immunity for any childhood disease.” It is time, they suggest, to cast aside coercion in favor of voluntary choice.

Again, the point is that herd immunity can’t exist unless vaccines are 100 percent safe.

There are also a number of safety issues that vaccine awareness advocates are raising, like the fact that vaccines are exempt from double blind placebo studies, the standard study used to determine the safety of most medications. In fact, vaccines have not gone through any appropriate safety testing.

When it comes to vaccine ingredients, it’s virtually unknown where these ingredients are going. Recent studies have shown that injected aluminum actually stays inside of the body and travels to distant organs, eventually ending up in the brain. You can access multiple studies on aluminum bioaccumulation from vaccines here.

These studies trigger no response from our federal health regulatory agencies, only silence. Perhaps it’s because they have huge implications…

The National Order of Biologists made a €10,000 donation to a group that questions the safety of vaccines. The Infanrix Hexa vaccine was the first one tested, and results showed no trace of antigens and a high level of contamination. You can read more about that here.

I don’t go deep into this within this article, but there are a number of concerns and points that clearly show that mandatory vaccinations should not move forward, and that freedom of choice should always exist.

I recently came across a post by MIT’s Dr. Stephanie Seneff via her Facebook page. As you can see below. 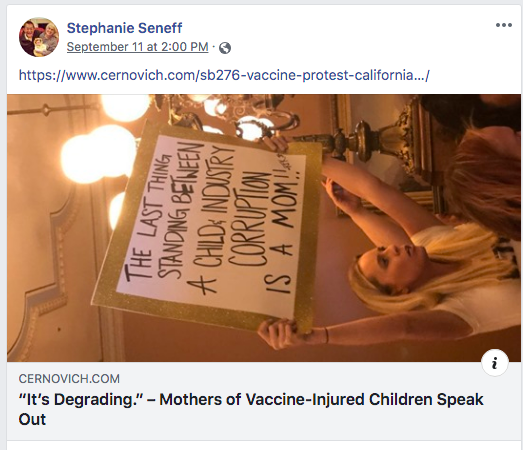 The article explains a number of things I have expressed in many of my vaccine awareness articles, one of them being that vaccine supporters commonly use terms like “anti-vaccine” and ridicule instead of simply addressing and peacefully combating the concerns that scientists and vaccine-awareness advocates are raising.

Mike Cernovich, author of the article, writes, “Here’s what I learned at a protest requiring children to take vaccines over their doctors’ objections.”

The moms are not “anti-vaxx.”

The media narrative is that a bunch of crazy moms decided to stop vaccinating randomly. This is a lie.

Nearly every other mother I spoke to (and I spoke to at least 100) had vaccinated one of their children. Their child had an adverse reaction, and they obtained an exemption for that child. Many stopped vaccinating their other children.

One mother described the experience of protesting at the Capitol as degrading. “If we were men, they’d take us more seriously,” she told me on the flight back.

Everyone on Twitter – even single people who couldn’t name two brands of formula – has a strongly held opinion on vaccines.

I don’t know all that much about vaccinations, which is why I attended the event in California. Why not learn? When I was single, I sure wouldn’t have had any opinion at all.

When people start freaking out about vaccines, I ask them to name some brands of children’s toys. The fact is that most have no idea what’s in vaccines. They don’t even know who makes something as safe and widespread as baby formula. 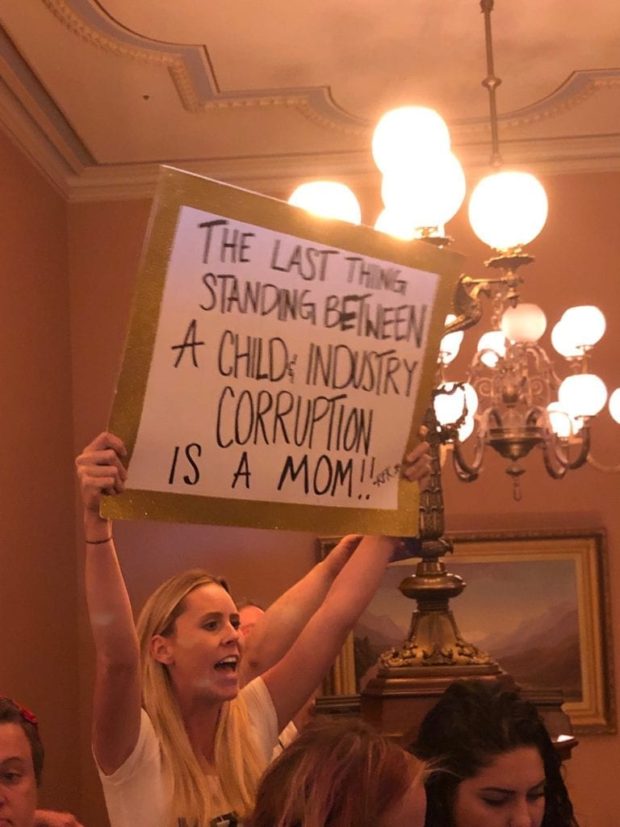 Most people with strongly held opinions on vaccines couldn’t tell you how many shots a child is given before he or she turns 5 years old.

People who throw around the “anti-vaxx” slur also couldn’t tell you how the United States vaccine schedule has changed. Nor could they tell you what the vaccination schedule is in Japan.

Six mothers and one father were arrested yesterday morning while protesting a vote approving amendments to SB276, a controversial vaccination-related bill. Under the new law, school children who had received medical exemptions from vaccinations would be barred from attending public/private school.

SB276 was seen as a major attack on medical freedom as a 2015 California law, SB277, already eliminated personal and religious exemptions to vaccines.

Under SB276, people like Senator Richard Pan, who is funded by Big Pharma, and Sen. Ben Hueso (convicted for a DUI that could have gotten a child murdered) are allowed to interfere with the doctor-patient relationship.

I spent the day with the group of people, mostly women and all mothers, who are called “anti-vaxx.” 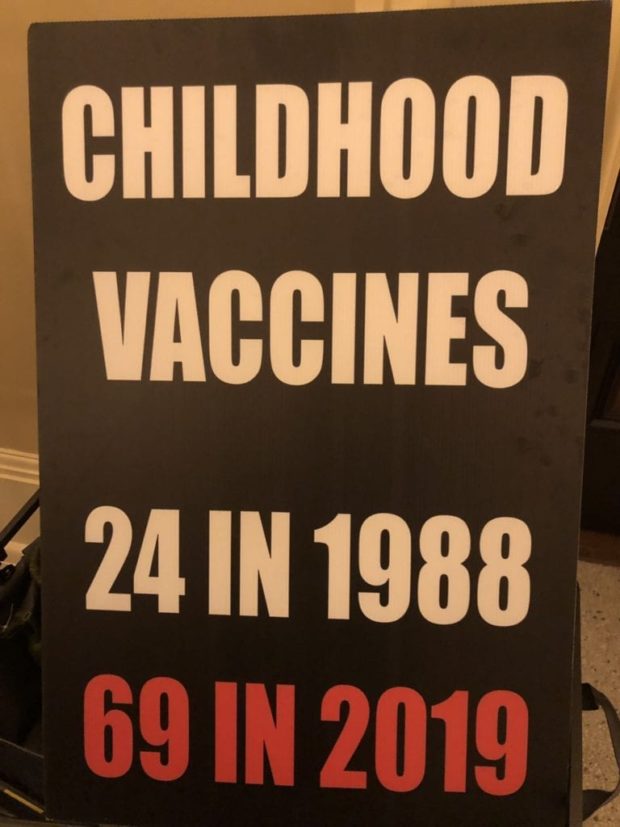 I find it hilarious that my mostly pro-Trump readers SCREAM about “anti-vaxxers” when those MAGA types have received nearly all of their “knowledge” about vaccines from the “fake news media.”

What? Yes, fact-check that one with The National Childhood Vaccine Injury Act.

There is big money in vaccinations.

If you think Big Pharma is doing you any favors, think again:

Even talking about vaccines gets you labelled anti-vaxx.

By writing this article, I’ll become a target. People will call me anti-vaxx.

There is more than enough reason showing that mandatory vaccinations are immoral and unethical, and make absolutely no sense. Is this really for health or is it for profit?