Locked and Loaded on Behalf of Empire First

American democracy and capitalist prosperity are dying on the vine of Empire. And this weekend’s drone attack on the largest oil processing facility on the planet is a graphic case of why. So is the related picture below.

This particular cruel foray was just one of thousands of sorties launched by the Saudis since 2015, which have resulted in upwards of 100,000 civilian deaths in northern Yemen and the virtual destruction of its economy – meaning horrific outbreaks of starvation, cholera and other diseases have become commonplace. 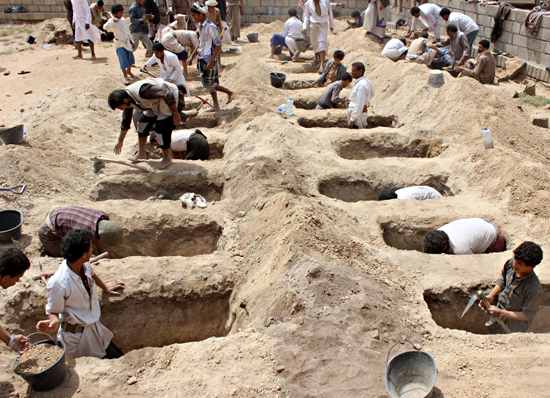 The cost to the Yemenis in misery and human life is incalculable. Nor can the stain of these genocidal attacks on America’s moral stature be gainsaid. Yet Washington’s collaboration in this mayhem is not based on even a smidgen of national interest or homeland security.

To the contrary, the Houthi who took control of Yemen’s capital (Sana’a) and who dominate the population of northern Yemen, are a second cousin practitioner of the Shiite confession of Islam. Accordingly, they are aligned with the Shiite regime of Iran and have received modest aid and weapons from Tehran in support of their struggle for independence from the Saudi-supported government in exile and its alignment with a motley array of Sunni-jihadist, Muslim Brotherhood and other anti-Shiite factions in southern Yemen.

Of course, given the fact that Yemen was divided into two countries – North and South Yemen – for nearly three decades between the early 1960s and early 1990s, it’s obvious that no war, bloodshed or devastation is needed at all to solve the religious and ethnic enmities of that godforsaken armpit of the world. All that’s needed is re-partition.

It’s simple. Two countries. No war. No misery. No genocide.

And, in fact, back in 2015 Washington could have told the new Saudi King (Salman) in no uncertain terms to accept partition or “no tickie, no washie”. That is, don’t you dare use a single American supplied aircraft or bomb to carry out war against the Houthi of North Yemen – or we will cut off resupply of spare-parts and technical support to the Saudi military’s advanced American-made weaponry.

And without the latter, of course, Switzerland would soon become the new abode of the monarchy.

But Washington’s neocons were having none of letting the world go its own way and staying out of other people’s quarrels.

To the contrary, the neocons on Capitol Hill and in the national security bureaucracy were dead-set on war with Iran’s current regime, and saw an attack on the Houthi as a way to administer a bloody-nose to Tehran; and one which could be performed with no muss or fuss by nominal Saudi proxies.

At the time, Obama was on the verge of his single greatest foreign policy achievement in the form of the Nuke Deal with Iran, but Barry was a weak double-talker when push-came-to-shove.

So he failed to step in forcefully and deter the Saudis from their own folly, thereby throwing a bone to the Netanyahu fifth column in Washington who were otherwise dead-set against the deal, and even invited Bibi to give a speech to a joint session of Congress that was an hideous affront to the American president.

So the Saudis were manipulated into massive but wholly unnecessary military attacks on their southern neighbor. In effect, they became unwitting mercenaries – handmaids of Empire – because it suited Washington’s purposes.

Someday they may actually learn that Washington’s “friendship” is a many edged sword. But in the end it’s based on mobilizing “allies” to buy its weapons and to march into conflicts which keep America’s Warfare State in fiscal clover.

In the big picture context, therefore, Empire Firsters have managed to get Washington squarely in the middle of a 1300 year-old Shiite/Sunni conflict – one that is now being waged in the clash between Saudi Arabia and Iran.

But that conflict has no bearing whatsoever on Homeland security: America has never had, does not have now, nor ever will have a dog in that hunt.

The Sunni/Shiite religious schism is their business to fight out, as it has been since 632AD.

To be sure, we have no brief for the medieval theocracy that currently oppresses the 83 million Iranian populace. The latter clearly do aspire to greater economic prosperity, personal and religious freedom, cultural modernization and presumably a more honest form of democracy free of the medieval religious dictates of the mullahs.

But Washington does not have a snowballs’ chance in the hot place of being any more successful at regime change in Persia, than it has been in Iraq, Syria, Libya, Somalia etc. And more importantly, Iran with a tiny $15 billion defense budget and $450 billion GDP has never threatened the American Homeland and has zero capacity to do so anyway.

But that has not stopped the Washington/Netanyahu War Party. We’d bet dollars-to-donuts that when the Saudis were green lighted back in 2015 to proceed with their Yemen adventure that they did not remotely contemplate that the Nuke Deal would be shit-canned by a new administration and that it would proceed to launch all-out economic war against its rival on the other side of the Persian Gulf.

Stated differently, we don’t think Riyadh anticipated the arrival of Donald Trump in the Oval Office or, more importantly, that he would be surrounded by the deplorable retinue of Bibi retainers and neocon acolytes who falsely persuaded the ill-educated New York real estate mogul gambler that Obama’s Nuke Deal was the worst foreign policy agreement in recorded history.

It wasn’t. It was actually a clever diplomatic scam of sorts in which the Iranians agreed to give up a nuclear weapons program, which both the CIA and IAEA (International Atomic Energy Agency) agreed was disbanded way back in 2003, in return for the release of several tens of billions of long ago sequestered funds, which was their own money in the first place.

It also submitted itself to a draconian inspection regime. The latter was with respect to a drastically scaled-back uranium enrichment program to produce civilian reactor fuel at 3.5% purity (vs. 90% bomb grade), which it is entitled to have as a signatory to the nuclear nonproliferation treaty along with several dozen other countries.

More importantly, it paved the way for the return of Iran to unhindered global commerce and the maximization of its great hydrocarbon resource for the benefit of its long-suffering people. So doing, the nuke deal paved the way for Iran’s moderate leadership under President Hassan Rouhani and its capable and American educated foreign minister, Javad Zarif, to steer Iran along a path that might have defused the three decade long confrontation with Washington.

Instead, under the vile leadership of the late John Bolton we now have the nastiest economic warfare campaign that has ever been launched by Washington. It includes browbeating virtually every country and every significant company in the world not to buy Iranian oil or transact most other forms of business – upon threat of secondary sanctions and exclusion from the U.S. controlled SWIFT global payments system.

After some temporary exemptions expired in May, in fact, the ferocious sanctions regime being administered by Washington’s anti-Iranian fanatics is literally threatening to bring the Iranian economy to its knees, even as it wrecks untold hardships on the daily life of its people.

Needless to say, the fools advising the Donald have now backed Iran into an impossible corner. They must strike back – as they apparently did through their Houthi proxies this weekend – or see their country virtually destroyed, and for what?

The answer is not that they violated either the letter or the spirit of the Nuke Deal – because they did not.

No, they are on the receiving end of Washington economic warfare machine solely because Bibi and the neocons do not like Iran’s foreign policy and its legitimate alliances with Shiite-oriented governments and parties in Iraq, Syria and Hezbollah/Lebanon; and because the Warfare State has made Iran its designated enemy and bogeyman needed to keep its massive defense budgets flowing.

So we can imagine the Saudis surprise and/or chagrin. By going after the Houthi they have ended up putting virtually 100% of the economic resources and wealth on which the Kingdom depends in harms’ way (and jeopardizing Aramco’s pending IPO needed to liquefy it), and for reasons that are far afield from their own national security (they could readily coexist with Iran and have done so through most of modern history)

Whether they acknowledge it or not, the War Party has made the Kingdom hostage to it own demented ambitions.

Yet that’s how the Empire rolls. The Persian Gulf is on the verge of an apocalyptic eruption that is absolutely not in the interest of any producer – Iraq, Kuwait, Iran, Saudi Arabia, UAE, Bahrain, Qatar – that borders on its waters. But events may now overtake sanity because the one person who could reel in the impending catastrophe is busy tweeting proof that he is dangerously ignorant of the issues and stakes involved:

President Trump warned on Sunday that the US was “locked and loaded,” and prepared to strike when America and Saudi Arabia identified who was responsible.

“There is reason to believe that we know the culprit, are locked and loaded depending on verification,” Mr. Trump wrote on Twitter. “But are waiting to hear from the Kingdom as to who they believe was the cause of this attack, and under what terms we would proceed!”

On Monday, Mr. Trump tweeted a reminder of Iran’s behavior when it shot down a US drone in June, a strike that led the US to prepare a military strike against Iran. Mr. Trump called off the strike after having second thoughts.

“Remember when Iran shot down a drone, saying knowingly that it was in their ‘airspace’ when, in fact, it was nowhere close,” he said. “They stuck strongly to that story knowing that it was a very big lie. Now they say they had nothing to do with the attack on Saudi Arabia. We’ll see?”

No, POTUS, the real culprit is the War Party that has utterly mis-educated you on the Nuke Deal, the phony threat Iran allegedly poses to Homeland security and the impossible corner into which you have backed the government in Tehran.

You came to Washington to house-clean the Swamp and to put America First at the center of the nation’s failed foreign policy. What you are in danger of accomplishing is enabling the Empire Firsters to ignite a conflagration in the Persian Gulf that could bring the entire world economy to its knees.

And, by the way, ensure that you leave office in January 2021 with a likely berth in a place not nearly as commodious as Trump Tower.

Previous article by David Stockman: The Coming Financial Panic and the 2020 Election