Today (Sept. 6) was another Jobs Friday but without the Census Bureau hires there wasn’t much to write home about. Just 96,000 private sector jobs were added to the payroll count, and even that figure got goosed by the 65,000 birth/death guestimate for the month.

Of course, we don’t put much stock in the BLS’ ridiculous idea that counting apples, oranges, and kumquats makes sense. That is, 50 hours of work per week (with overtime) in a steel plant is economically light years away from a 10-hour gig at the McDonalds drive-thru window on weekends.

So why anyone thinks that the headline jobs count tells you anything meaningful about the actual state of America’s $21 trillion economy is truly hard to fathom.

At least in the case of the aggregate hours worked index, however, you are toting-up similar units of account – even if the economic value-added of those hours varies considerably. So don’t be surprised if we contend that the August BLS report provided still more evidence that the current record 121 month business expansion is fast approaching its sell-by date.

In fact, it was actually chock-a-bloc with signs that the main street economy is rapidly fading, and that the Donald’s ballyhooed MAGA is nowhere in sight.

Thus, at the most aggregated level, the year-over-year gain in private non-supervisory hours remained stuck at merely + 0.84% versus last August. That’s down sharply from the 1.5%-3.0% gains which have prevailed since mid-2014 and means that labor hour growth has fallen to levels not seen since the first half of 2010. 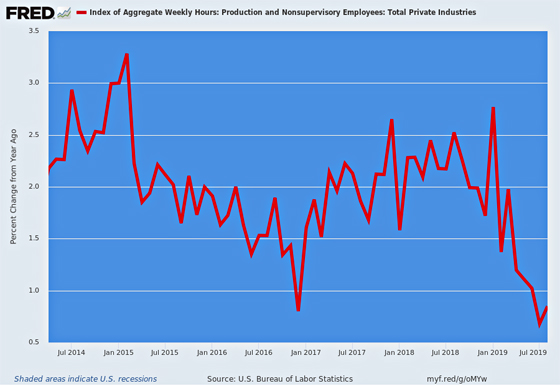 Moreover, the above picture represents the entirety of the private sector, yet recessionary downturns do not proceed on an “even-steven” lockstep basis among all sectors. The downdraft always incepts in the goods-producing sectors of the economy and then cascades outward from there.

Given that historically proven sequence, today’s report was especially dispositive. To wit, both mining/energy (brown line) and manufacturing (purple line) are now in negative growth territory (Y/Y) on a hours basis. That’s primarily because overtime is being pared and weekly schedules are being reduced – the usual prelude to actual headcount layoffs.

In the case of construction (dark green line), hours growth is still positive, but has been reduced to half the rate of a year ago.

Indeed, the real meaning of the chart below is unmistakable. The $1.7 trillion Trumpite/GOP tax cut paid for on Uncle Sam’s credit card caused a short-term pop in early 2018. But that’s long gone.

These three sectors are the heartbeat of the industrial economy and they are now struggling to stay above the flat line. 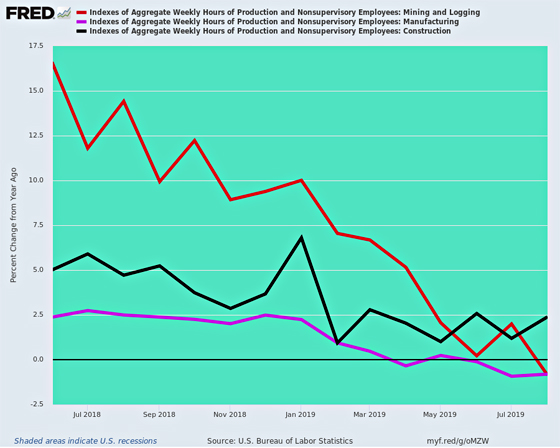 Not surprisingly, actual industrial output has been heading south even faster – proving once again that real businesses (as opposed to the BLS models) trim labor hours nearly as fast as their order backlogs dry-up. Compared to the sugar high rates which peaked last fall: 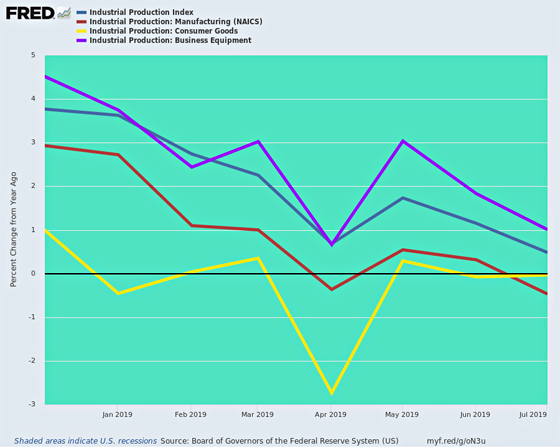 Now the reason the above deterioration is crucial to understand is that the Donald’s brief sugar high was just a short-lived blip in a truly niggardly recovery trend. To wit, nearly 12 years after the December 2007 pre-crisis peak, overall industrial production (light blue line) is up just 3.6%.

Even more incredibly, the three sub-components shown in the chart printed July levels that were actually below December 2007 – with overall manufacturing (brown line) output down by 2.6% and consumer goods (yellow line) down by 5.2%. 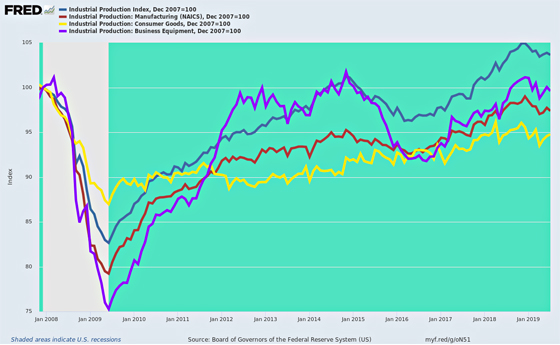 Needless to say, this is not your grandfather’s recovery or any recovery at all.

The previous record 1990s business expansion provides a benchmark for the latter. By month #119 of that expansion cycle, industrial production was up by 45% from the June 1990 pre-recession peak, while business equipment output (purple line) had surged by 100%, manufacturing output (brown line) was higher by 55% and even consumer goods production (yellow line) had risen by 27% from its pre-recession starting point.

At length, of course, even that healthy business expansion succumbed to the dotcom crash and the recession which followed. So how in the world, we might fairly ask, could Jay Powell stand up at a conference in Switzerland earlier today and say that no recession is in sight because the American consumer is strong?

The answer, of course, is that he is viewing the US economy through his Keynesian beer goggles, and the accounting illusion that because PCE (personal consumption expenditures) accounts for 70% of GDP, consumers therefore cause growth.

They do not. Workers, businessmen, entrepreneurs, savers, investors, inventors, innovators and speculators generate growth; they are the instruments of Say’s Law and the supply-side origins of rising output, efficiency and prosperity.

By contrast, consumers are the economy’s transmission belt: They spend from the wages and profits earned in production and from the borrowings that future earnings might reasonably support.

But with households at peak debt, hours worked slipping toward the flat-line and the industrial economy rolling over – one thing is reasonably certain: The vaunted consumer does not walk on economic air and will succumb like always to weakening growth of production and diminishing wherewithal to spend. 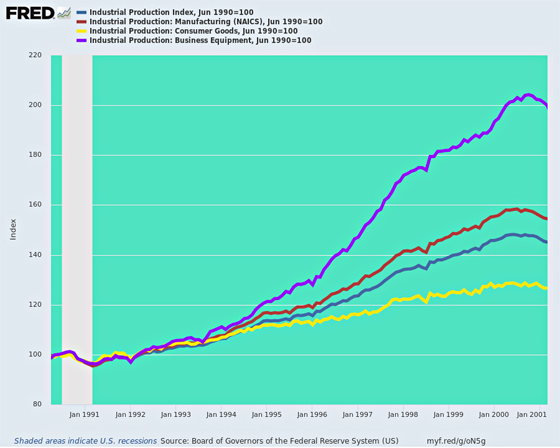 Part of the Keynesian fetish about the Almighty Consumer, of course, stems from the superficial notion that since the US economy is overwhelmingly classified as “services” based, the visible weakening of the industrial sectors per the above data should not be cause for undue concern. Purportedly, pilates teachers and home health nurses will keep the great whirligig of GDP cranking – notwithstanding punk indicators in the industrial sector.

But we’d say not exactly. Much of the services sector is involved in the handling, warehousing, transport, wholesaling and retailing of the consumer and capital goods which flow through the economy. So when production and shipment volumes ebb, so do the associated services which support the merchandise based economy.

Again, today’s Jobs Report has startling evidence of just that phenomenon. To wit, transportation and warehousing labor hours are now in a downtrend every bit as severe as the industrial production categories.

After rising at a 5%+/- year/year rate during the sugar high of early 2018, the rate of gain has literally fallen out of bed. During August, total hours in these sectors were up by just 0.4% versus prior year.

That’s a 90% deceleration from year ago rates of gain, meaning that aggregate pay envelopes in these “services” sector are coming in far lighter than the were just a few months back. 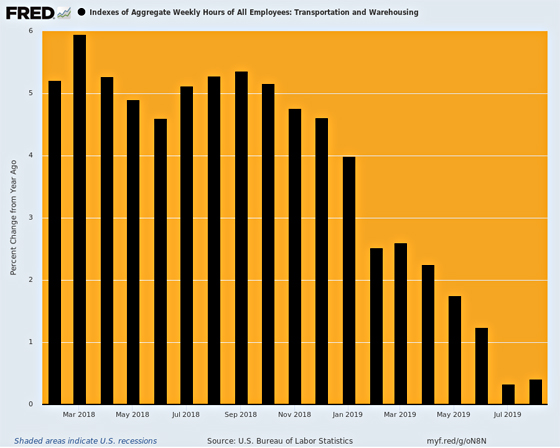 Also, again, the physical output measures from these sectors match the swooning trend of labor hours. The economists at the Fed and on Wall Street never seem to get the word because their vision is so badly blurred by their Keynesian beer goggles.

But not so for everyday businessman who actually have to make ends meet. For instance, in Q2 revenue in the sector grew at just 2.0% versus Q2 2018, or barely enough to keep up with inflation. And that was also a dramatic plunge from the 8.3% year over year growth rate posted in Q4 2018 at the peak of the tax cut sugar high. 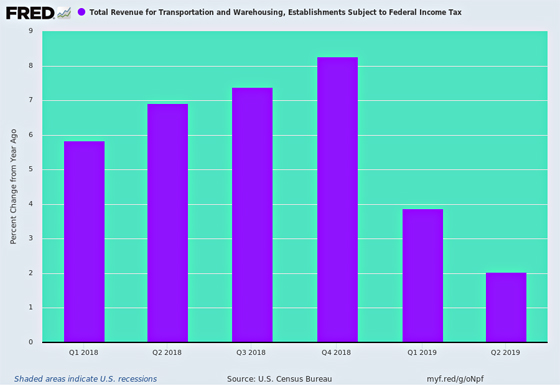 The above rapidly weakening trend is also evident in the Cass Freight index, which covers all modes of transport including truck, rail, barge and air. It dropped by 5.9% in July from prior year, marking the eighth straight month of year-over-year declines.

This index, tracks shipments of consumer and industrial goods, not bulk commodities such as grains, petroleum and metals. And the declines in the index during the last three months were the deepest drops since the financial crisis a decade ago. 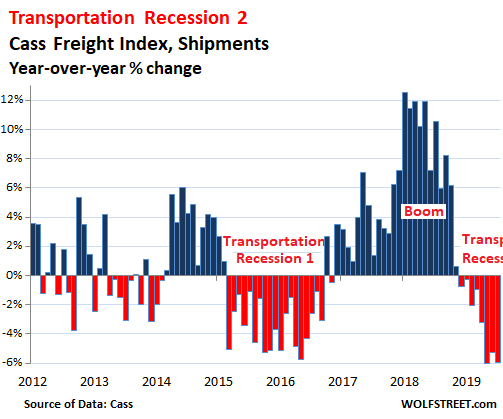 But once they hit that sixth consecutive month of year over year declines- we are a nation of consumers. We are what we buy. And if there are fewer trucks delivering whatever Jeff Bezos is selling us, then that is a sign that a consumption-led economy is slowing.

So after that sixth consecutive month, Cass came out and used the word contraction, that they see a contraction in the third or fourth quarter of this year. And I can’t disagree with their assessment, given the fact that even the labor market has started to show some signs of serious weakening.

Nor is freight transportation and warehousing an aberration among the industrially related “service” sectors. During August, the hours worked index for wholesale trade, transportation of people and utilities also hit the skids.

Actually, the swoon has been underway since early this year – with the year-over-year hours index registering a negative print for three of the last four months. 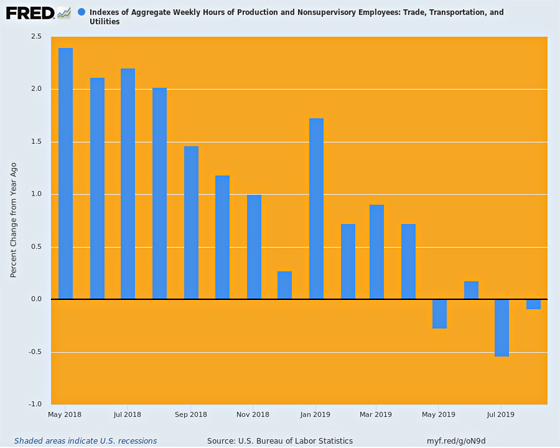 The same pattern is detectable in the retail sector, and the chart below is not simply the doings of Amazon. That’s because whatever hours Amazon is adding in warehousing, shipping and delivery are captured in the above charts for these sectors and have not been sufficient to offset the evident plunge of hours growth in both transportation and warehousing and trade and utilities.

Meanwhile, hours worked in the retail sector have been negative on a year over year basis for the last five months running. 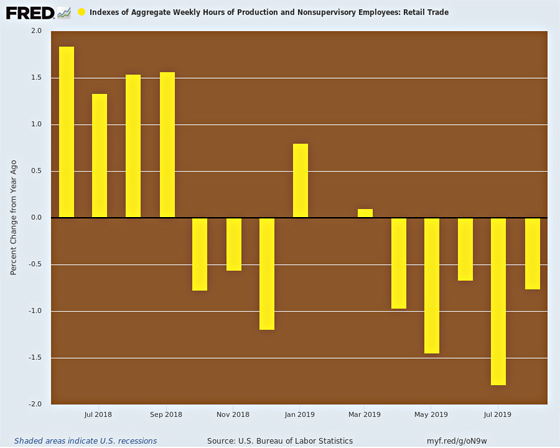 That recessions do not march onto the stage in lockstep, of course, is a given. That’s more than evident in the two cases displayed below. Since December 2017, hours in the education and health services sector (purple line) have continued to march higher, as have hours in the restaurant, bar, hotel and leisure sectors (brown line).

But here the thing. Hourly wage rates in these sectors are among the lowest in the US economy and benefit packages range from slim to none. For example, average earnings of utilities sector workers were $41.94 per hour in August and the goods-producing sector averaged $29.13 per hour.

By contrast, leisure and hospitality workers earnings were just $14.53 per hour and for education and health care workers the figure was $24.26 per hour.

In short, down under the hood, the August Jobs Report left little to the imagination: The earnings based support for the allegedly “strong” consumer is not nearly what it is cracked up to be. 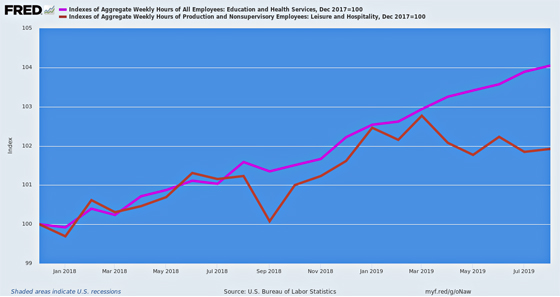 We seriously doubt that the Donald much cares about what was buried in the August report details. But he undoubtedly recognizes that the Greatest Economy Ever might actually falter between now and November 2020 – so he continues to waste no time setting up the blame game.

So, early this AM he out did himself, tweeting that he actually agrees with Jim Cramer.

Then again, the last time Cramer went off the deep end attacking the Fed was August 2007.

Apparently, the Donald has forgotten what happened 12 months thereafter!

“I agree with [Cramer], the Fed should lower rates. They were WAY too early to raise, and Way too late to cut – and big dose quantitative tightening didn’t exactly help either. Where did I find this guy Jerome? Oh well, you can’t win them all!”

Previous article by David Stockman: An Unprecedented Collapse of the Global Financial System

Japan and Germany Race To Shut Down Nuclear PowerFictitious Markets, False Economics, and the Reality of Fraud