Dear Trump Advisors: Prop the Market Up Now and Lose in 2020, or Let the Market Crash and Win in 2020

The Everything Bubble has topped out, and trying to push it higher for the next 14 months is a sure way to increase the damage next year.

One of the more reliable truisms is that Americans vote their pocketbook: if their wallets are being thinned (by recession, stock market declines, high inflation/stagnant wages, etc.), they throw the incumbent out, even if they loved him the previous year when their wallets were getting fatter. (Think Bush I, who maintained high approval ratings but ended up losing the 1992 election due to a dismal economic mood.)

As a result, politicians try to time the economy to align with elections. Get any economic pain over with early in the election cycle, then prime the fiscal pump in Year 3 to boost the economy in Year 4 (election year).

The global economy and the credit cycle aren’t always so pliable or predictable. Oil can soar due to geopolitical tensions, or a speculative financial bubble can burst (subprime mortgages in 2008, dot-coms in 2000), torpedoing the economy. 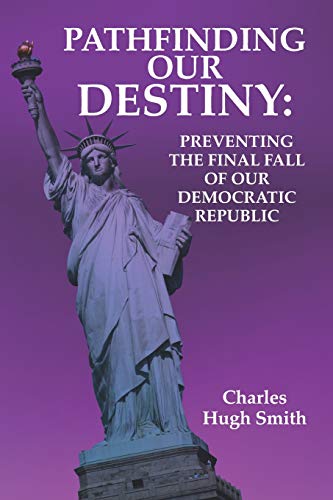 The intuitive strategy is to prop up the economy and stock market by any means available heading into the election cycle: if we can just keep this over-valued pig of a market aloft until November of next year, so the thinking goes, we’ll likely win the election (or at least we won’t lose because stocks and the economy tanked).

But this strategy is a loser when the credit cycle has run past its expiration date: most credit-based expansions last at most seven years, and here we are in Year Ten. Credit exhaustion is setting in, speculative bets are maxed out and the global economy is rolling over.

Trying to prop a speculative, over-valued market up for another 14 months is like shoveling sand against the tide. All that this will accomplish is the well-deserved market decline will be pushed forward so it will occur just before the election, destroying the incumbent’s chances to win re-election. In sum: gravity eventually wins and the pig falls to Earth.

At the end of the cycle, the counter-intuitive plan is the winning strategy: crash the market now so a recovery can be engineered going into the election season. The ideal moment to crush the stock market is now: push it over the cliff and let it wallow for a few months, then ride to the rescue with some hope-inspiring coups (a China Trade Deal, for example) that re-start “animal spirits” a few months before electioneering gets serious.

Trying to stop the financial tides at the end of the cycle is a guaranteed way to lose an election. Timing is everything in trading and politics, and the time to push the stock market over the cliff is now. Keeping this over-valued pig aloft much longer will guarantee there won’t be enough time to engineer a recovery before the election–even if the recovery is only of sentiment.