I suspect not many libertarians follow the cable channel CNN, whose initials evidently are becoming an acronym for Contemptible Neoconservative Network, and I don’t make the claim lightly. Of course the millions who follow Tucker Carlson’s program on Fox News would have seen his report on CNN’s broadcasting Kamau Bell’s support of Antifa and its use of violence (see the video below).

But to me even more egregious is CNN’s recent attacks on Julian Assange and Russia Today. Years ago, something that I myself only recently became aware of, Assange had a program on RT. Using no facts but spurious allegations, CNN is now once more attacking Julian Assange. Below is a screen capture of a Tweet by Reporter-Producer Marshall Cohen of CNN. 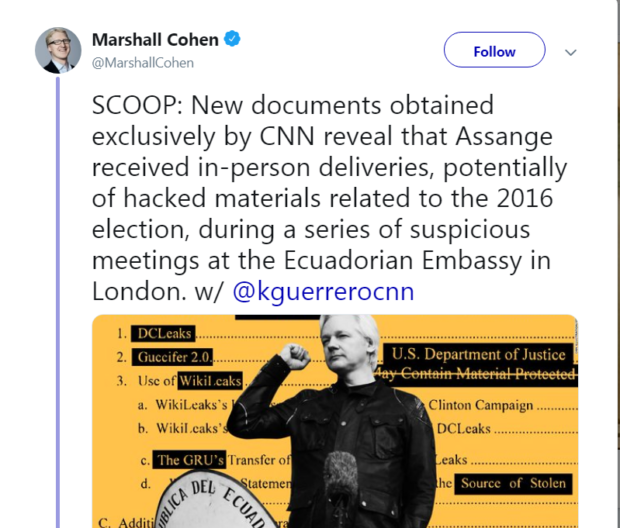 “New documents obtained exclusively by CNN reveal that WikiLeaks founder Julian Assange received in-person deliveries, potentially of hacked materials related to the 2016 US election, during a series of suspicious meetings at the Ecuadorian Embassy in London,” is a direct quote from the “article.” 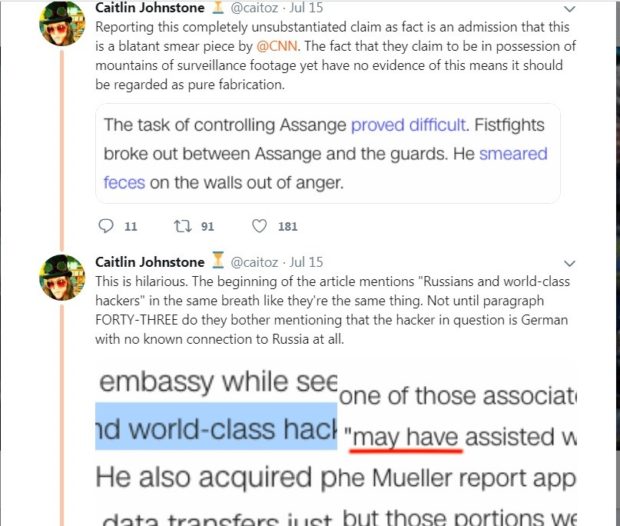 To me, it is beyond ironic that CNN makes Assange out to be a demented “feces smearing” psychotic yet at the same time he’s also the mastermind of a Russian spy ring. Of course, the Russians involved rebutted the allegation with a mixture of fury and wit; as usual CNN is reporting “Fake News” without facts to back up its claims.

Via Twitter (in Russian) Sputnik and RT editor-in-chief Margarita Simonyan has publicly responded, with English translations provided by Sputnik:

“The ‘We-rummage-through-the dumps-in-search-of-a-Russian trail’ TV channel and my favourites from the CIA have cast-iron information that my deputy went to the [Ecuadorian] Embassy and brought something to Assange. Dear CIA, I’ll tell you more—not only my deputy went to the embassy but I also did so and then posted photos on Twitter. Should I send a link to you?” Simonyan wrote.

She went on by mentioning “cassettes, floppy disks, flash drives, pieces of paper, technical equipment, candy, and other things” that she and her deputy ostensibly brought to Assange.

In this vein, Simonyan recalled that Assange had worked as a host on RT and that “it is difficult to conduct the programme without technical equipment”.

“And we carried away from Assange a lot of things, this one [autographed copy of book, see below] for example. Now I have it on my bedside table. Do you need my fingerprints? I have them”, she further noted.

Simonyan also called on CNN and the CIA “to find out for themselves” why Assange praises her, citing American taxpayers and “our employees”’ money used for CIA and CNN employees’ salaries.

Simonyan’s remarks come after CNN published a report on Monday citing a spate of “exclusive documents” as claiming that Assange allegedly cooperated with Russian hackers and other intelligence officials in order to damage Hillary Clinton’s reputation and ruin her presidential run during the 2016 US elections. 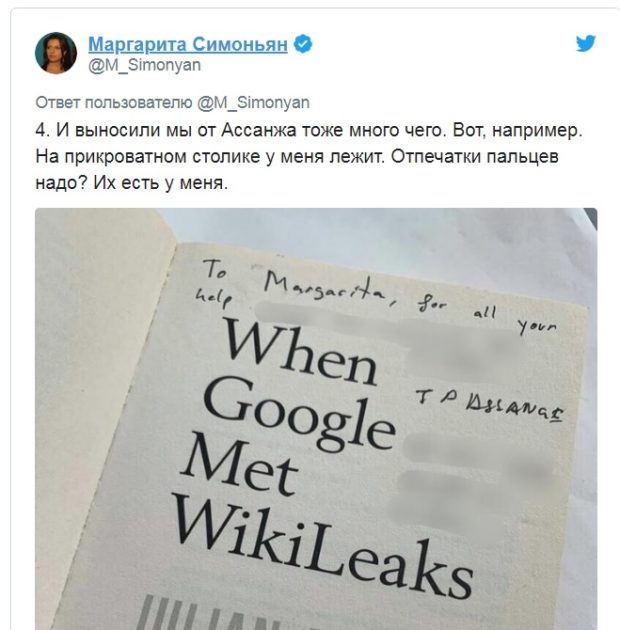 The book she is referring to is Assange’s When Google Met Wikileaks, which I highly recommend.

Throughout the story, the CNN authors seem almost incredulous that Ecuador allowed Assange, a political refugee, to have basic facilities like high-speed internet or the absence of 24/7 snooping – all of which he is portrayed as having exploited to undermine American democracy.

Assange also had visitors – including a “Russian national named Yana Maximova” (who the authors never tracked down, but appear to assume her an insidious figure by the sole merit of her being Russian) and with “senior staffers from RT”such as London bureau chief Nikolay Bogachikhin, who even “gave him a USB drive on one occasion.”

Bogachikhin, one of the very few people who actually responded to CNN’s requests for comment, was open about RT’s cooperation with Assange. RT’s editor-in-chief Margarita Simonyan joined in by tweeting about her own visits to Assange and listing quite a few more things RT staff brought to him: “Cassettes, floppy disks, flash drives, pieces of paper, technical equipment, candy…”

That’s because RT hosted a show with Assange, and widely advertised it both on air and online. “It’s hard to host a show without equipment, you know. It was an awesome show. Can you Google it up yourself?” Simonyan tweeted.

CNN, meanwhile, repeats the literal smear – not substantiated by a single photo or video clip since Assange’s arrest in April – that the journalist “smeared feces” on the embassy walls.

Wrapping up the piece, CNN finds it sinister that the Russian government denounced the arrest as a violation of Assange’s human rights and dignity – the ultimate proof that Assange “still has allies in Russia.”

As I write these words today on Wednesday July 17th 2019, RT posted an exclusive interview with Former Ecuadorian president Rafael Correa who granted Assange asylum; his comments on the CNN (literal) smear campaign are absolutely vital to hear:

Correa told RT on Wednesday that CNN’s original story about the embassy operating as a “command center” was “rubbish” and that the network was trying to build an untrue narrative of cooperation between Assange and Russia to ensure the public supports his eventual fate. 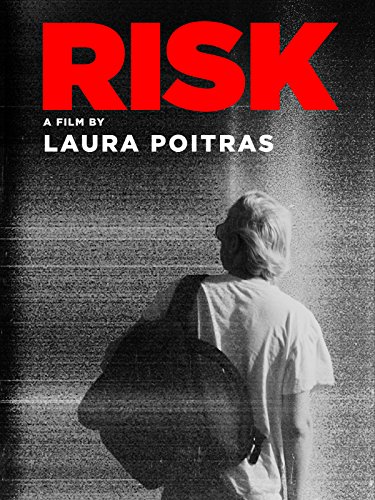 What CNN and other media are saying is rubbish, but we’re used to it. They are prepping for the show. The reason is, when they extradite Assange to the US and sentence him to life, they want the honest backing of the public. They are setting the stage.

Correa compared CNN’s assertions about Assange to its claims about “weapons of mass destruction” in the lead up to the Iraq war in 2003 — media manipulation which was used to make Americans “applaud a war,” he said.

Now, to “justify the assassination of Assange or to extradite him” they are constructing a new narrative about a fake “command center” for election meddling, he said.

Also today, RT posted this video on YouTube (Google hasn’t banned the channel yet but I’m sure they’re working hard on it.)

While the Mueller Report has done its best to implicate Assange and Russia, a recent court case has brought out heretofore unknown information. As the site The Last Refuge reports and also includes a link to the full court filing:

The details contained within the lawsuit filing (full pdf below) are stunning.

If this information is true and accurate, the DOJ claim of a Russian hack –based on assertions by DNC contractor, Crowdstrike– would be entirely false. Additionally the DC murder of Seth Rich would hold a far more alarming motive.

Here is a screen shot that The Last Refuge provided: 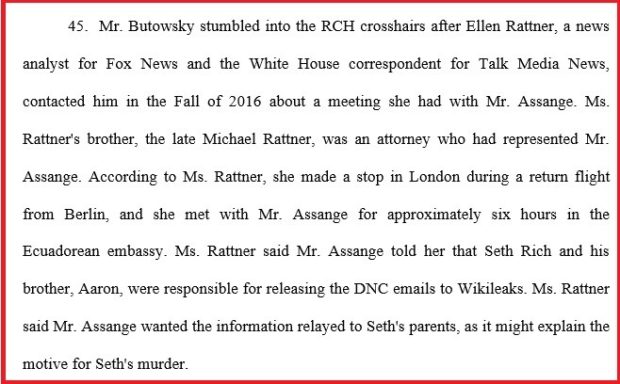 If the allegations in the court filing including the information that Seth Rich’s brother was involved are proven to be true, it may explain the reaction of Seth Rich’s parents to their son’s murder but I don’t want to speculate in the manner of CNN; this is only recent information that of course CNN is not covering, nor any other legacy media outlet that I am aware of. 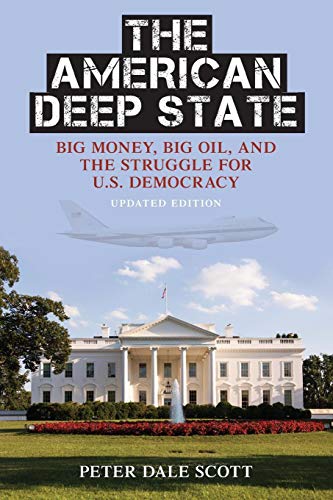 Nevertheless, I have presented facts and arguments against CNN in this piece for LewRockwell.com because it is important that we just not let ourselves be swayed by heavy-handed, incompetent propaganda by Deep State auxiliaries that compose the Media Industrial Military Congressional Financial Complex. In fact, as president Correa noted, what other justification does CNN have for its smear other than to implement the extradition and the assassination of Assange?

Ms. Simonyan spoke movingly of the greatness of Julian Assange when she received an award in a news story covered by Russia Insider and reported in the below video by Russia’s Vesti News. I can’t speak more eloquently than she did and may her words be a balm to the wounds that CNN would dare inflict and open. Julian Assange helped to reveal—even if the majority of the insouciant American people didn’t care—the depredations of the state and the political class; he spoke truth and shamed the devil.

For these reasons and more, CNN’s actions are—as usual—beneath contempt.

Question: One of your journalists can be delivered to the USA where he can face 175 years behind bars. Well, he got into hot water before he started working for you, but still. He was an RT journalist, Assange. What does it feel like, to tell the truth?

You know, I’d like to dwell on Assange. If I can. I consider Assange to be the greatest journalist of our time and our greatest contemporary. I believe that Assange will certainly make it into history if the world goes the way we’re used to, meaning that history finally reveals the truth and isn’t a chip programmed by Google and tagged into a baby’s hand which contains some Wikipedia and makes a person think this way or that. Then, Assange won’t be even mentioned. I fear that it will happen as we’re moving in the leaps and bounds to what Orwell, Huxley, Zamyatin, and others described.

But the truth told by Assange about the crimes of the American military, the duplicity of American foreign policies, the fact that the USA is watching over all of us. We all know it now, it’s an open secret. YouTube refused to award us [RT[ a Gold Play Button for one million subscribers, even though it always does that. But why? Because we’re state-funded. So, is there a rule that you can’t award the Button in this case? No, but it’s up to us. Assange was the first to reveal it. It made many high-powered people worldwide change their attitudes.

The sole fact that he leaked data to WikiLeaks. Naturally, they couldn’t have left him in peace, safe and sound. Naturally, they’ll lock him up for many years. I feel miserable when I think about how he could’ve come to us. But he didn’t, you know. He went to the Embassy of Ecuador. The then-president of Ecuador was his friend. By the way, he now has his own program on our channel. And then he thought it would last, maybe, forever. But then that president left office and handed over power to his successor who made a U-turn in a night. And now we see what happened to Assange. I’m sure we wouldn’t have delivered him. Like we don’t deliver Snowden. I’m very proud of that there’s no criminal extradition. But I feel so very sorry.

I asked him then: “Julian, why are you doing it?” He didn’t make any money on that.