Vladimir Putin is the man Americans love to hate.

In fact, even Superman battled with him in his comic book; look out, Lex Luthor, Putin is taking over.

And although this sounds like a joke, here’s an image from the comic book (copyright of course of conglomerate DC Comics/AT&T/Time-Warner/CNN—those nice guys): 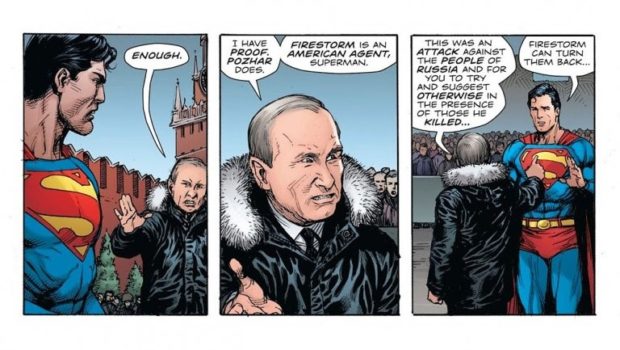 The power of American propaganda was discussed in this article on Southfront.org:

CALL OF DUTY: MODERN WARFARE – WHITE HELMETS, “BANA AL-ABED” AND KILLING “EVIL RUSSIANS. The YouTube video (and the way things are going who knows how long it will stay on the site) is below; it discusses everything from the comic book to The White Helmets and the recent video game:

Dangerously, this kind of propaganda frequently precedes military conflict. And the dangers of a “hot war” with Russia appear beyond the comprehension of the Western world’s oligarchs. As Federico Pieraccini recently observed in his article for StrategicCulture.org, “What Comes After Trump—World War III?”

Trump is appreciated by a part of the deep state for his efforts to reinvigorate Washington’s military-industrial complex by practically offering it a blank check. This is without considering Trump’s economic-financial assault on allies and enemies alike, which seems to be an attempt to squeeze the last drops out of any remaining advantage to the dollar-based system before it collapses.

The long-term plan of the US elites sometimes seems to be to provoke a great-power conflict in order to gain victory and then construct a new global financial order atop the rubble.

His conclusion reminds me of the site The Daily Bell, under its original ownership, that frequently ran commentary with the theme of “directed history” or what I’d describe as manipulated events to provide as they saw it more concentrated power and a stronger state; depopulation might also be on the agenda, a frequent theme of popular movies.

However, there was no coverage in the legacy media of Putin’s meeting with Western journalists. RT America host Rick Sanchez stated that even he faced resistance to having a segment on his program. He said, “To those of you thinking, ‘Of course, you’re going to play Putin soundbites—you’re RT. No, no. Actually, I kind of had to talk our editorial staff into this one because over the weekend I happened to be listening on what he had to say how dangerous our world is now and it got me to thinking whether we think he’s an angel or the devil himself—as he’s made out to be in the U.S. media generally speaking—the questions he is raising about nuclear proliferation may be paramount to our survival.”

The full video is below; and he speaks in Russian, with English subtitles displayed. Notice he’s not making threats; he’s actually making a plea, a call for the West, not only its oligarchs but its peoples to wake up to very real existential danger, as Professor Cohen has discussed, we face in the current environment.

Putin noted, “If we do not keep this ‘fiery serpent’ under control, if we let it out of the bottle, God forbid, this could lead to a global catastrophe. Look, today everyone is addressing environmental issues, and they are right to do so…even children are engaged in this, boys and girls all over the world. But they do not realize, these young people, especially teenagers and children, they are not aware of the global threat and serious challenge posed by possible global conflicts. This is something adult men and women should think about. However, I get the impression that these issues have somehow become commonplace, and have kind of shifted to the background. This raises natural concerns.”

As Sanchez put it, Putin then discusses in more ominous terms if nuclear proliferation continues: “If no one is interested in renewing the Start-3 treaty, we will not renew it. We have already said one hundred times we are ready to do so, but no one is willing to talk about it with us. Please note that there is no formal negotiating process and everything will expire in 2021.

“Mind you, there will be no more instruments to limit an arms race. Or, for example, deploying weapons in outer space. Do we understand what this means or not? Ask the experts. It means that each of us [is] under a nuclear weapon. Permanently. But we are doing this and doing it quickly. Will anyone ever think about it, talk about, or show any concern?

“No. Complete silence. Or take low-yield nuclear weapons, or non-nuclear strategic missiles. What if a global-range strategic missile is launched from a submarine in the middle of the ocean? How do we know [whether] it carries a nuclear charge or not? Do you realize how serious or dangerous this is?”

Of course, libertarians should rightly be skeptical of leaders of all governments. However, I suspect Putin’s plea is truly sincere; unlike the Western oligarchs, who consider their populations as little more than cattle at best, Putin is concerned about the impact of war on his nation.

Recently, the Russians demonstrated yet another hypersonic missile; in the video below, which has over 403,000 views on YouTube (if the count is accurate), the speed is not accelerated.

Russia does not conceal what this ABM defense does; it is not as America’s a nuclear weapon but uses an advanced fragmentation warhead that even if the missile misses the ICBM it targets will destroy the incoming missile. The video from State TV service Vesti News is below.

I am not aware of any American defensive weapons to protect the population. Russian military analyst and historian Andrei Martyanov discussed the missile on his blog post “200gs? Who knows?” In an earlier blog post, “It Was Expected and Predicted” he notes:

UPDATE from 06/06/19: As I stated not for once, United States will exit START (strategic arms limitations) treaty and Russia was preparing for that. Here is Putin today:

Translation: Russia’s newest hyper-sonic weapons will be able to protect Russia even in case of START-III ceasing to exist.

Putin added (in Russian), very ominously, that if nobody wants START’s extension, well, Russia is not going to insist. What will be demonstrated next? I can only speculate but REAL, fully integrated echeloned anti-missile system covering all of Russia is being constructed as I type this. We are yet to learn about actual capabilities of S-500 which surpass by far those of S-400 (imagine that). Plus, in another little news-piece, a Natsionalnaya Oborona reports (in Russian), Poliment-Redut, which is an anti-air and missile system on Russia’s latest frigates of pr. 22350 (and reportedly will be installed on two remaining nuclear cruisers), will receive long-range (400 kilometers) missile based on 40H6 for S-400. So, make your own conclusions.

Could Russia survive an American first strike? Perhaps in the future. But America lacks any competent defenses at all; we have nothing like the S-400, S-500 and the above hypersonic ABM, not to mention its secretive lasers.

My writings on such dangers here on this site are not my most popular work; in fact, I feel very much as Putin does, almost like Cassandra: will no one understand the dangers, will no one speak out? Where are the protests? Where are the calls to Washington to reign in its aggression?

Putin has made a plea. I have made mine here.

I don’t know if anyone is listening.