Silicon Valley Giants Collaborate With The US Government On Venezuela 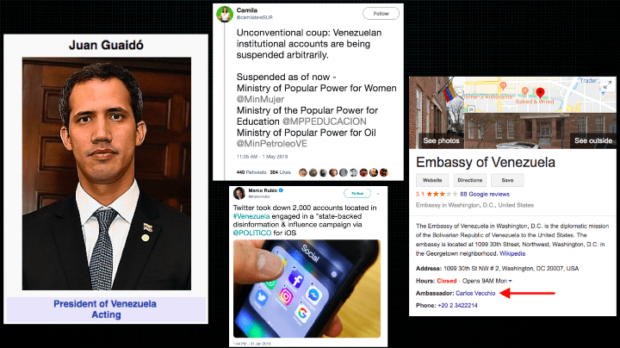 Whenever you speak out on a public forum against internet censorship, like the recent Instagram/Facebook banning of Louis Farrakhan, Infowars, and several right-wing pundits, you always offend two major political groups. The first group are the power-serving authoritarians who identify with the left side of the political spectrum; they argue that it’s good and right to trust Silicon Valley plutocrats to regulate political speech on giant monopolistic platforms. The second group are the capitalism cheerleaders who believe there’s a free market solution to every problem; they argue that these Silicon Valley giants are private companies which are completely separate from the government, so it’s not accurate to refer to what they do with their own property as censorship.

Is that really true, though? Is it really accurate to claim that these sprawling corporations that nobody’s been able to compete with are simply private companies, separate and distinct from the government of the nation they’re based in? If you look at their behavior, it certainly doesn’t seem like it.

The US government is working to topple the government of Venezuela and replace it with a puppet regime. On the off chance that you were still in denial of this self-evident fact, check out this April 24th fact sheet on the website for the US embassy in Brazil which openly boasts about the way economic and diplomatic pressures are being deliberately placed on the Venezuelan government to install Washington puppet Juan Guaido to the nation’s leadership. Trump’s National Security Advisor has blatantly threatened that the US will starve the families of Venezuelan military officers if they don’t overthrow their government, right there on Twitter.

This is a known, unconcealed US government agenda. And the Silicon Valley giants are actively facilitating it.

For example, as highlighted by journalist Max Blumenthal, if you go to Google and look up Venezuela’s embassy in Washington, DC, the result you get looks like this: 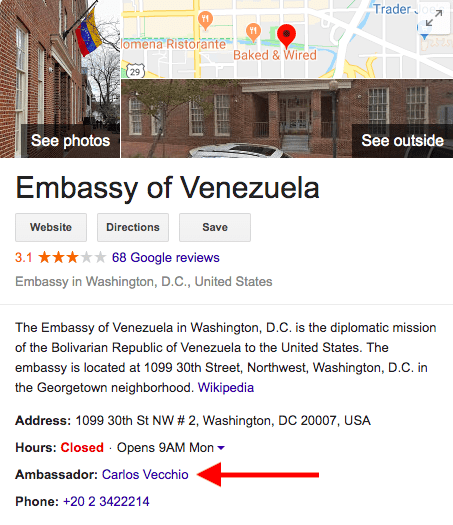 Google lists Venezuela’s ambassador to the US as Carlos Vecchio, who has no governmental power and no authority to issue Venezuelan passports, because he represents no actual government but rather the puppet government that the US is attempting to install. Google has no reason to refer to this US government propaganda construct as “Ambassador”, but it does so anyway in support of the US government’s aggressive campaign to replace the Venezuelan government staff in the DC embassy with the staff of its imaginary puppet regime.

Google, by the way, has been financially intertwined with US intelligence agencies since its very inception when it received research grants from the CIA and NSA for mass surveillance. It pours massive amounts of money into federal lobbying and DC think tanks, has a cozy relationship with the NSA, and has been a military-intelligence contractor from the beginning.

With Wikipedia, whose leadership allows it to serve as a narrative management operation for the US-centralized empire, it’s the same thing. Look up Juan Guaido, who has no actual political power and no authority whatsoever in Venezuela, and this is what you’ll see: 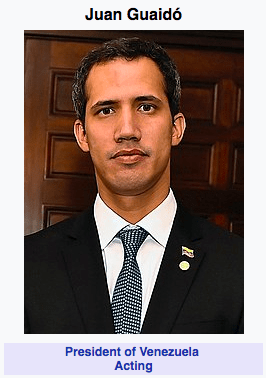 It’s been that way since January.

With Twitter it’s the same. During and immediately after the April 30th failed coup attempt in Venezuela the site suspended numerous Venezuelan government accounts, some permanently, and earlier this year Twitter deleted the accounts of nearly 2,000 pro-Maduro users. In 2017 we saw the same, with thousands more pro-Maduro accounts deleted. Nothing comparable has ever happened with the governments of US-allied nations.

With Facebook we’ve seen the pages of Venezuela Analysis and TeleSUR English temporarily suspended, along with the permanent deletion of “inauthentic” Venezuelan, Iranian and Russian accounts in conjunction with Twitter. Facebook’s censorship program is directed by the Atlantic Council narrative control firm, which is funded by the governments of the US and its allies.

There is no legitimate reason for these massive Silicon Valley corporations to be acting in the interests of US State Department agendas, and yet here they are doing exactly that.

Friendly reminder that in an October 2017 Senate Judiciary Committee hearing, senators spoke with top legal and security officials for Facebook, Twitter and Google in a very disturbing way about the need for a Ministry of Truth to silence dissenting voices. Democratic Senator Mazie Hirono of Hawaii demanded that the companies adopt a “mission statement” declaring their commitment “to prevent the fomenting of discord.”

Think tank narrative manager and former FBI agent Clint Watts kicked it up even further, saying, “Civil wars don’t start with gunshots, they start with words. America’s war with itself has already begun. We all must act now on the social media battlefield to quell information rebellions that can quickly lead to violent confrontations and easily transform us into the Divided States of America.”

“Stopping the false information artillery barrage landing on social media users comes only when those outlets distributing bogus stories are silenced — silence the guns and the barrage will end,” Watts added.

In a corporatist system of government, corporate censorship is state censorship. Anyone who’s fine with Silicon Valley plutocrats banning Alex Jones, Louis Farrakhan, or various Venezuelan government figures from having a voice on these giant monopolistic platforms is an idiot.

These corporations are not separate from the US government in any meaningful way, and their behavior is therefore no better than the state censorship we commonly see US government officials decrying in the governments of non-allied nations. It’s arguably worse in some ways, because at least the Chinese know their government is censoring them.

Our world’s fundamental problem is that the people calling the shots are omnicidal sociopaths, and the only force capable of stopping them, the collective will of the public, is too thoroughly propagandized to do so. The narratives are too tightly controlled, so the people don’t rise up against the oppressors who are driving them toward extinction via climate chaos or nuclear war. We won’t make it as a species if we can’t find a way to overcome this.

Everyone has my unconditional permission to republish or use any part of this work (or anything else I’ve written) in any way they like free of charge. My work is entirely reader-supported, so if you enjoyed this piece please consider sharing it around, liking me on Facebook, following my antics on Twitter, throwing some money into my hat on Patreon or Paypal, purchasing some of my sweet merchandise, buying my new book Rogue Nation: Psychonautical Adventures With Caitlin Johnstone, or my previous book Woke: A Field Guide for Utopia Preppers. The best way to get around the internet censors and make sure you see the stuff I publish is to subscribe to the mailing list for my website, which will get you an email notification for everything I publish. For more info on who I am, where I stand, and what I’m trying to do with this platform, click here.

Render Unto CaesarCrossroads or Fate?