They Shall Not Grow Old Is a Superb Antiwar Film

I recently saw the documentary They Shall Not Grow Old, an account by English soldiers of their experiences in the Great War of 1914-1918. Culled from hundreds of hours of colorized actual wartime footage, it’s a beautiful and heart wrenching film. It’s also a superb antiwar film, simply through its graphic and accurate depiction of mass death and casualties across blood-soaked European battlefields.

Refreshingly, the film relies solely on audio transcripts from about 200 English soldiers who fought in World War I. There is no script, and no narration. The viewer simply hears the gravelly, aged voices of the soldiers themselves, never identified by name or rank. They are anonymous, but judging by the towns from which they hailed and the farm or factory jobs they left, most were enlisted men.

Though commissioned by the BBC, producer Sir Peter Robert Jackson has no political axe to grind. This is a story of men, of human beings and their oftentimes horrific experiences in perhaps the savagest of modern wars. It has little to say about particular battles, commanding officers, politicians, or any of the events surrounding the war. It stands apart from most war documentaries precisely because Jackson strenuously avoids any filter between the soldiers’ recollections and the viewer.

From the outset we see the naivete of young men, many no more than 15 or 16. They hear vague rumors about the assassination of Franz Ferdinand. They see activity in their small towns and villages, with soldiers bustling about setting up enlistment stations. They read newspaper reports about Germany threatening Europe, and feel both pressure and pride compelling them to join the war effort. Though the official enlistment age is 19, many of the taller boys lie and are readily accepted. 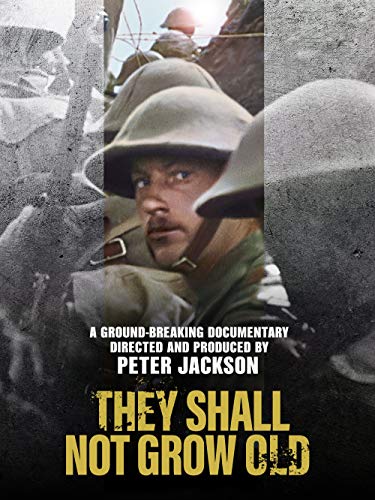 For almost all of them, signing up is simply the thing to do. They join the fight for their mates, for their families, and for the approval of the girls and older people in their towns. Still teenage boys, they have no capacity to imagine or justify what will come. Questions of politics and ideology, questions about just or unjust war, are simply outside of their thinking at the time. Joining the war, and defending England, are obviously the right thing to do.

Training is scant, and often local. A few older men in their 30s and 40s with military experience set up barracks and begin teaching basic formations and physical fitness. Quartermasters dole out ill-fitting uniforms and stiff boots, all fated to become rotted and waterlogged in trenches. Well-used Enfield rifles are issued, heavy and quite foreign to many of the boys who have never fired a gun. And after just a few weeks, the boys head off to the beaches, woods, and fields of France, Germany, Prussia, Belgium, and beyond—scarcely removed from their school boy or farm boy days. Anyone with a young teenager can imagine how their parents felt.

The battle scenes are gruesome, and intense. The film does not spare viewers. Dead and dismembered bodies feature frequently, but the sheer horror and bloodshed are moving rather than gratuitous. Humanity in wartime isn’t an abstraction, but the real and abject collection of flesh, bone, organs, blood, and tissue of the soldiers who were running beside you a moment ago. War is violence, and They Shall Not Grow Old never strays from reality.

Motorized military transport was less common then, so horses were ubiquitous among officers. But the equines too are slaughtered, and some post-battle scenes show a staggering number of dead and injured horses, some still braying and flopping in misery.

Battlefield medicine and medical corps were rudimentary by today’s standard, and the fighting is often too intense or lengthy to allow for removal of dead and injured comrades. Many soldiers lie horrifically injured for hours or even days, writhing in pain and often bleeding to death before help could arrive. During lulls in fighting, the soldiers do the best they can to walk among the bodies and search for signs of breathing or movement, and in some terrible cases make the decision to shoot a suffering man who clearly won’t survive as an act of mercy. With the sheer number of dead, and the constant need to advance against the enemy, mass burials on the fly are commonplace. Chaplains do their best to hold brief services, with the ragtag survivors doffing their helmets and allowing themselves a moment of quiet.

Privation is as constant as the fighting. Most of the troops eat only when they can, mostly dried meat and hard tack from an English tin (an early version of today’s MREs). Many only weigh 10 stone. Coffee or tea is a luxury, requiring a heating fire. Oftentimes trenches fill with water, soaking their legs and leading to savage rot and infection in their lower extremities. Water borne diseases run rampant, shaving and haircuts become more and more difficult, and dental care is almost nonexistent—as made clear by the gray and jumbled grins the soldiers sometimes manage to flash for cameras.

As German forces retreat, and victory becomes more likely, the English troops begin taking prisoners. This part of the film is especially hopeful, as it shows the common humanity between working class enlisted soldiers on both sides. German combatants (though sometimes not the hated machine gunners) who put their hands up and their rifles down are taken into impromptu custody and fed. The English soldiers recognize the Germans as boys just like them, though skinnier and provisioned more badly. Some captors speak German, some prisoners speak English. Cigarettes and coffee are spoken by all. The Germans are pitied, not hated. They all lament the damnable war, and talk about going home.

But going home is not so easy, and at the end of the film surviving soldiers recount their jarring experiences returning to their old lives. Though there has been rationing and hardship across England, their families and friends can’t relate to what they’ve been through. Ludwig von Mises experienced this too, upon return to Vienna from his time in the Austro-Hungarian army: only other soldiers could truly understand what they had seen and done. The economy in post-war England is wrecked, and many returning soldiers find their old jobs gone and their former employers less than sympathetic. There are no ticker tape parades to welcome them home and no GI bill to get them back on their feet. It’s hardly surprising many rebelled against the English class system during the interwar years, no longer content “down on the farm” as the famous song went.

Memorial Day observes and seeks to remember the wartime deaths of American soldiers. Observation, not celebration, differentiates it from Armistice Day (now Veteran’s Day). We should observe and memorialize death, but celebrate the end of war. Anyone who watches They Shall Not Grow Old will do both, and feel intense gratitude for the relative peace we enjoy today in the West.

The film invites all of us to reflect on the pettiness and minor irritations of our easy lives. It inspires us to recommit ourselves to peace, and to challenge those who advocate for endless US wars. Most of all, this great film will make you angry at the politicians and generals who sent those young boys off to slaughter 100 years ago.