Environmentalism: Evidence Suggests it Was Always and Only About Achieving World Government

It is common sense to protect our environment, but what has occurred for 50 years is exploitation of that idea for a socialist agenda. We wasted 50 years believing that humans are not natural, and everything they do is destructive. We wasted and continue to waste trillions of dollars on unnecessary policies and useless technologies, all based on false assumptions, pseudoscience, and emotional bullying.

We now know 50 years later that every single prediction concerning the environmental demise of the Earth and the people made in the original Earth Day Report was wrong. We also know that every additional claim, such as overpopulation, global warming, sea level rise, desertification, deforestation, and sea ice collapse, among many others, were wrong. I challenge anyone to produce empirical evidence that proves anything happening today is outside any long-term record of natural activity.

Convince the people that the entire world is threatened, and you can convince them that no nation can save it. It is then easy to convince them that a world government is the only way to save the planet. The trouble is that none of it is true. The World is in good shape, and people are living longer and healthier lives in every nation. 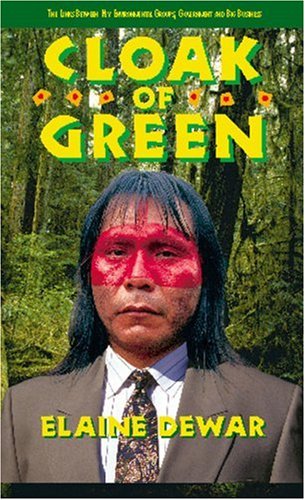 Like the majority of people, Elaine Dewar assumed environmentalists were commendable even heroic people. She began research for a book singing their praises. It didn’t take long to learn the basic premise was wrong. Following the traditional and proper methodology, rarely seen these days, Dewar identified the duplicitous characters involved in the Canadian environmental movement and laid them out in her book Cloak of Green. She spent five days at the UN with Canadian Maurice Strong arguably the world architect of official environmentalism. He was praised excessively, as in this article, “The World Mourns One of its Greats: Maurice Strong Dies, His Legacy Lives On.” Another article recognized the evil he personified, “Who is Global Warming Propagandist Maurice Strong?” After the five days, Dewar concluded,

“Strong was using the U.N. as a platform to sell a global environment crisis and the Global Governance Agenda.”

The environmental movement as the basis for a socialist world government was in the minds of people like Strong and fellow members of the Club of Rome in the late 1960s. However, it was launched on the world on April 22, 1970, by a small group centered at Stanford University. The date is critical because it was the first Earth Day. It is also very important to know the choice was deliberate because it is the birthday of Vladimir Lenin. The environmental movement was a deliberate program to impose communism on the world.

The underlying theme of the environmental movement makes the following false assumptions.