Humpty Dumpty Had A Great Fall, Caused By The Federal Reserve

Shhh… Don’t forward this posting to widows who placed a $100,000 in their savings account over a decade ago and who think they really have $100,000 of purchasing power stashed in their bank account, or we might have a bank run on our hands.

Oh, the banks would close and even more severe limits on withdrawals would be invoked than are currently in place should a widespread run on the banks ever occur.  There is no way a run on the banks will ever be allowed to happen again, like in the Great Depression when the Stock Market crashed in 1929 and anxious depositors withdrew their savings, forcing banks to liquidate (call in) loans, which led to many bank failures.

But let’s not lose sight of the fact some banks failed and some savers lost money in the bank-induced lending crisis of 2008.  The fear of bank failures does not solely belong to eccentric conspiracy theorists.  By 2011 over 300 US banks had failed.  The banking system and FDIC conducted a slow burn off of its small imprudent lending institutions, leaving the bigger offenders alone.  It was a way for the big banks to swallow up the small.  One wonders if it was pre-planned.  Competition in banking (free-market banking) is not something bankers embrace.  For example, bankers use quasi-governmental entities like Frannie Mae and Freddie Mac as dumping grounds for their bad loans and the public is never the wiser, being told these agencies help make home loans more affordable.  The news media follows along too.  So the public is always in the dark.

Wall Street has learned its lesson.  The public uses the stock market as its bellwether for the economy.  Federal plunge protection teams, large market infusions by pension plans, and other manipulations including provision of near-free money to the financial classes help ensure the stock market doesn’t become Humpty Dumpty.  But then again, that makes the stock market a false prop.

Low interest rates on savings drove people out of savings accounts to place their money at greater risk in the stock market in an often futile attempt to beat the rate of inflation, said to be ~2.0% by the nation’s central bank (the Federal Reserve). But as economist John Williams posting at ShadowStats.com notes, the target inflation rate you read about in the news headlines is 2.0%, but in actuality is ~5.8% as of April 2019 and ready to move higher as trade tariffs on imports from China loom.

Back to that widow with the hundred-grand

A recent advertorial for online banks said bank depositors can earn 155 times more interest just by using a different kind of savings account, meaning online banks that don’t have buildings and large payrolls as overhead.  As an article at CNBC.com stated, “Most major banks offer an interest rate of 0.01%.  Internet banks offer between 1.00 and 1.55%; a $10,000 deposit will yield $155 after one year.”  These are called “high-yield” savings accounts.  Now widows should run to their bank and electronically switch accounts, right? Is a measly $55 difference enough to switch banks?

How much money do Americans earn on their saved money?

According to available data, about $4 trillion of Americans’ money was stashed into savings accounts a decade ago (2009) and that amount grew to around $9.1 trillion a decade later, by the end of 2018 (see chart below).   But that chart is misleading.  The amount held in saving accounts grew from more savings accounts, not from more interest earned.  It was during that time that investors took their money out of riskier investments and stashed them in banks, albeit at a loss in yield in pursuit of safety as the Federal Deposit Insurance Company now insures savings accounts up to $250,000. 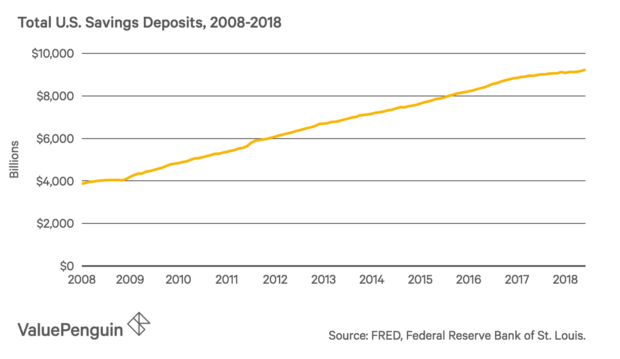 Here is how ValuePenguin.com says it:

U.S. savings deposits in December 2008 stood at $4.1 trillion, having grown in volume (but not value, B Sardi) by 29% over the previous 5 years.  Over the next 5 years, total savings deposits grew by 74%, reaching about $7.1 trillion in 2013. The increased pace of growth in savings deposits has barely slowed, with the St. Louis Federal Reserve reporting a total of $9.2 trillion in American savings accounts for June 2018.

To rescue savers today, interest rates paid on savings would have to rise but so would the interest rate on home loans, thus crashing the real estate market, and would commensurately raise interest paid on the national debt as well.  But this would back the country into a corner financially where taxes would have to be raised unmercifully to pay hundreds of billions more dollars in interest on the national debt.  The Federal Reserve has led the economy into this box canyon.

Economist Martin Armstrong says the US must cease borrowing money largely from foreigners to pay off the interest on the national debt, for which tax payers get no benefit.  Armstrong says the rate of inflation will not significantly rise out of control by just printing money rather than borrowing it. This is why economist John Williams has questioned whether the Federal Reserve has lived up to its mandate to keep interest rates low and employment high.

Savers are being lied to

The Federal Deposit Insurance Co. is not talking.  The Federal Reserve isn’t saying a word.  Even the President, as much as he may want to help “the little guy” and bring jobs back from overseas, dares not start a bank run.  David Stockman is, along with John Williams, one of the few economists who dares risk his neck to point out savers are being lied to.

In his epic rant entitled: “The Central Bank War On Savers—–The Big Lie Beneath,” Stockman says (2016):

“A retired worker who managed to save $5,000 per year over a 40 year’s lifetime of toil and sweat in a steel factory now earns in daily interest on a bank CD. To wit, a single cup of cappuccino.

Yet the central bankers claim they have absolutely nothing to do with this flaming economic injustice.

Did you ever wonder how much cash is in circulation?

I’ve often wondered, how much money is in circulation in the U.S.?  You know, ten, twenty, one-hundred-dollar bills, nickels, dimes, quarters, etc.

Well, in 2009 when the banking/lending crisis was in full swing, $888.3 billion of coins and federal reserve notes (dollar bills of different denominations) were in circulation.  That came to about $2922.04 per capita.

That amounts to ~$5198 per capita of cash everybody was competing for, up from $2922.04 a decade earlier.  Of course, diluting the money supply is another way of fanning the flames of inflation.

So, what is the net worth of Americans today versus yesterday?

The chart below is a sad story.  It says the Federal Reserve bank has utterly failed to protect and grow Americans’ wealth while enriching the fortunes of the financial classes.  Here is the chart, directly from The Federal Reserve itself:

Changes in Net Worth: Households and Nonprofit Organizations 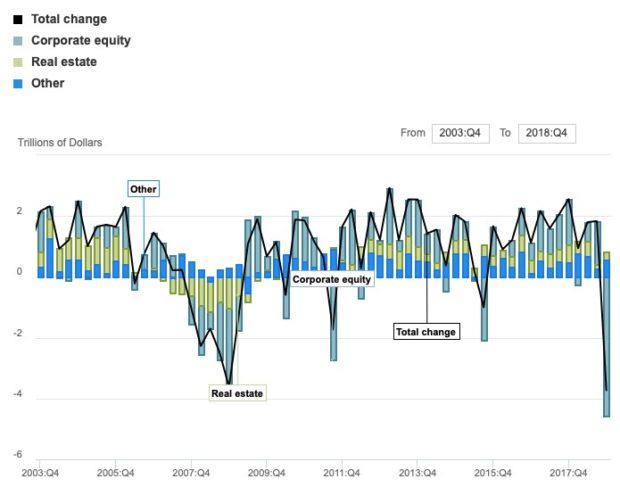 The chart graphically depicts the collapse of the banking system in 2008 with an accompanying crash in real estate values (2007-2009), a plunge in corporate equity in 2011 (as corporations hid their money overseas due to onerous taxes demanded by an administration that demanded corporations “pay their fair share”); and finally an unreported collapse in household net worth which Americans are living through at the present time. 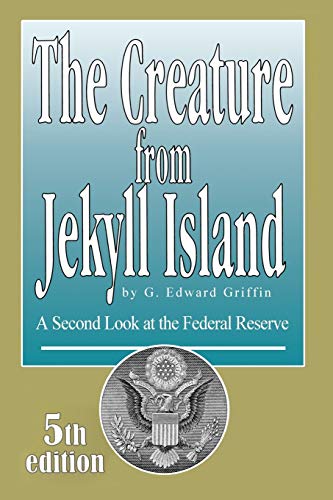 How much money is in the world?

$554 trillion global derivatives (a contract that derives value from performance of an underlying asset, such as futures, options, warrants and swaps). Derivatives are where the investment class spends most of its time.  Wealth is enriched but jobs and real productivity are not generated.

How well did the banks do in cleaning up the mess they created?

Lending institutions created the banking crisis by lax lending practices.  Lenders have since cleaned up their financial mess (see data below showing far fewer loans being written off or in delinquency).  But over the period 2009-2018 banks did this at the expense of its customers.

HOW WELL DID LENDING BANKS DO IN CLEANING UP LOANS 2009-2018
(FULL CHARGE-OFFS & DELINQUENCIES)?

Conclusion: Banks & Lending Institutions Cleaned Up The Mess They Created By Offering Bogus Loans
To Unqualified Borrowers, But Also At The Cost Of These Debtors
Source: Federal Reserve 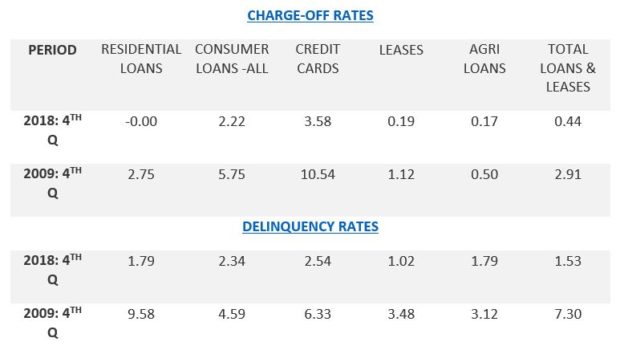 How well did the twelve Federal Reserve banks do in 2018?

The Federal Reserve Bank’s 2018 earnings (what was returned to the US Treasury from interest gained on lending out money to consumer banks) were approximately $63.1 billion, representing a decrease of $17.6 billion from 2017.

Consumers aren’t spending and corporations are choosing to enrich themselves

Velocity of money (how fast money goes from butcher to baker to doctor) is at an all-time low (people are not spending money in a consumer economy).  The $3000 average tax return is obviously being spent paying down credit cards as Americans have spent their future income buying on credit to support their lifestyle, or maybe even saving or investing, but not buying much.

While the President engineered tax reductions to lure the return of trillions of repatriated dollars in corporate profits held overseas to avoid onerous federal taxes, major corporations decided to keep their profits overseas.  Or they used that money to buy back shares from the small shareholders in their companies and ingratiate their own wealth instead of launching new ventures and hiring more Americans, a double-cross if you ever saw one.  The country is committing financial suicide.

How much did the twelve Federal Reserve banks earn for themselves in 2018?

The Federal Reserve Bank operating profit was $7.0 billion, including expenses of $2.0 billion for Board expenses and currency costs ($861,734 to purchase paper money from the US Treasury Department).  Pretty good return on investment ($861,734 for $5 billion profit, a +349% return) for themselves while the economy crashes.