2109 is giving us “Creepy ol’ Joe” Personally, I whenever I tweet about Joe Biden (D – Polanski) I just use #PedoJoe. I’ve been doing it for years now.

And, as such, I’m fascinated by the sudden outrage over Joe Biden’s predilection for groping girls in public. This has been discussed, posted, reposted and hashed out among people with any sense of decency for years.

Yes, folks, I’m taking the moral high ground on Creepy Joe Biden. It’s not a tall hill after all.

It made me sick last year while watching the otherwise really funny Parks and Recreation on Netflix to see Amy Poehler channel her sick fascination with Biden into creepy stalker comedy.

But it wasn’t funny.

Of course, as that show went on it became Poehler’s Mary Sue-like descent into DNC fan fiction rather than actual comedy. But, I digress.

Because it’s obvious that for a long time now the DNC and those behind it have been working overtime to normalize the dehumanization of children for predators like Biden.

As the backlash against Biden builds we’re seeing the regime mouthpieces try and deflect for him. Case in point the New York Times:

You got it all backwards guys, he’s not groping and sniffing women, it’s “tactile politics” pic.twitter.com/um8bdS4Ne3

Tactile Politics? I wonder how much time the NYT editorial staff had to wrestle with their conscience before publishing this obvious bit of DNC spin.

Who am I kidding? These people don’t have consciences!

And neither do their opposition within the DNC itself.

SnuffleGate is an obvious move by rival factions within the Democrats to kill Biden’s chances as the Gerry Cooney to Donald Trump in the 2020 election.

My bet is on Soros and the Justice Democrats. Because not only do we have this coming out we also have the sordid stuff pertaining to Biden’s son, Hunter, and Ukraine.

Again, this was all known for years in the corner of the Internet known as “Fake News.” It’s not really even appalling or outrageous that they would ignore such obvious corruption surrounding Biden for years until it could be deployed for maximum benefit.

We know that Justice Democrats is the plaything of Soros, Tom Steyer and others backing the dumbest man in political commentary, Cenk Uygur and is Not-So-Young Turks to promote hard-core ‘progressives’ (translation: actors posing as commies) to radicalize and vandalize what’s left of the Democratic process in this country. 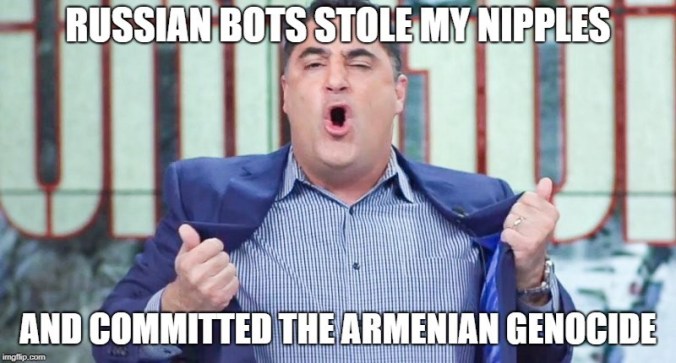 Watching this as a libertarian who routinely says, “Don’t Vote, it only encourages them” I get to sit back and use my smug face while reminding everyone that this is what comes when you fail to heed the warnings of Friedrich Hayek who answered the question “Why do the worst always get on top?” so succinctly in Chapter 10 of The Road to Serfdom.

I think a lot of Britons are wishing they’d read that before the 2017 general election now.

But when it comes to what’s happening here it’s obvious that Biden, the epitome of the safe, establishment old-white guy Democratic Party, was 1) easily vulnerable to this attack and 2) targeted for destruction.

Soror, Steyer and their ilk are vandals. They are using useful idiots like Cenk Uygur for their own ends which is the same sick psychodrama playing out in Europe right now over Brexit.

They are attacking both the democratic process here in the U.S. by funding hordes of immigrants in the hopes of gaming the electoral college on the one hand while sending literal morons like AOC and Ihlan Omar to Congress to distract everyone and send shock waves through the DNC establishment.

The Pelosi/Schumer (D – Boomers) wing of the Democratic party is failing. They had to back off on impeachment talk because they knew if they pursued Trump further they would be vulnerable to not only him winning in 2020 but to a ton of their people being ‘primaried’ out and losing control over the party itself.

I said this when Pelosi cut her deal with them to retain the Speaker’s gavel and put AOC on the finance committee.

That’s what rock-star Alexandria Ocasio-Cortez represents. She is the face of what’s left of Occupy Wall St. And she has a strong, knee-jerk, anti-incumbent, anti-establishment momentum behind her.
It doesn’t matter that she’s 28 years old, has little to no life experience or a firm grasp on reality. This is politics and these are chaotic times. She already has an acronym (AOC) and a nickname. She’s important.
Warhorses like Pelosi don’t know how to change their ways this late in their game. They think they can buy off people like AOC and outmaneuver her.
Pelosi faced a serious challenge to her party leadership in the run up to being elected Speaker of the House again. And she paid for that smooth vote with AOC’s appointment to the House Financial Services Committee.

Now Biden, the supposed front-runner, an old-baby boomer warhorse himself who could command some of the center of this country in a race against Trump, is history.