Is China Being Framed?

By Godfree Roberts
The Unz Review

Propaganda is to a democracy what the bludgeon is to a totalitarian state. Noam Chomsky.

I was researching Chinese censorship when–irony of ironies–I fell afoul of American censorship, providing an opportunity to update you on the state of the art under both regimes, starting at home, with the recent attempt to frame the President for crimes he did not commit.

Like many attempts to frame people, events and nations–Vietnam, Iraq, 9/11, JFK, Bin Laden–it was a State hoax, a falsehood deliberately fabricated to masquerade as truth . An atrocity story sustained by artful censorship and loud, proud, bold and brassy propaganda. An expensive, in-your-face, preposterous conspiracy, sustained for two years at great financial and reputational cost to the nation. Wildly ambitious, batshit crazy and so self-destructive as to boggle the mind, it was one of many propaganda-driven frame-ups, another of which in progress as you read these lines.

It checks all the boxes: big, bold, loud and proud, expensive, in-your-face, a preposterous hoax, daringly ambitious and utterly self-destructive. 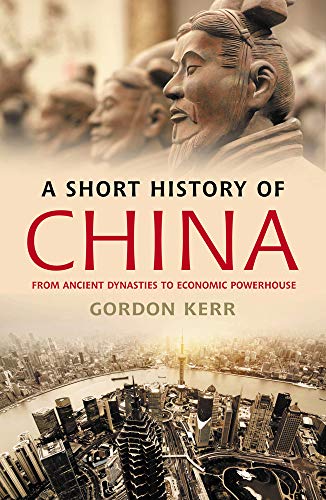 The China Hoax frames China’s Confucian politics and economics as if they were–or should be–Roman. It explains why thousands of predictions of China’s collapse have been one hundred percent wrong for seventy years and why we keep repeating them, and why we think of China’s government as oppressively authoritarian when ninety-five percent of Chinese think it’s super. It also helps us see how the narrative is sustained by an almost totalitarian censorship regime.

It is well known that our censors–for that’s what they are–have silenced hundreds of thousands of Americans with National Security Letters[1] and, whenever those prove inadequate, have permanent authority to take control[2] of all American communications and information. If undesirable communications persist they can kidnap, imprison or execute the communicators[3] without fear of court trial or media criticism. Since China emerged as a threat to our hegemony six months ago they have tightened their control noticeably.

I bumped into them following a clue in Ann Lee’s[4] story about “A reporter and friend of Michael Massing,[5] who worked at the Beijing office of The Wall Street Journal, who told Massing that the editors in Washington regularly changed material information and opinions in his articles. Given the twelve-hour time difference, by the time his stories went to press in the West, the editors had replaced all the Chinese interviews with statements from American talking heads who work at think tanks promoting anti-China perspectives.”

Congressional testimony from the CIA’s Victor Marchetti[6] revealed the source of the talking heads’ funding: he told Congress that the Agency provided two hundred fifty million dollars[7] annually, “To The Asia Foundation for anti-communist academicians to disseminate a negative vision of mainland China,” and paid journalists and publishers worldwide[8] to do likewise.

I had always assumed that the government manipulates the news somehow and had I thought a little deeper I would have realized that, after spending billions on framing China, censors would eventually tire of pipsqueak consumers like me questioning their narrative.

Until two weeks ago my comments on China in mainstream media attracted thousands of responses (one-third angry) from millions of readers and provided priceless exposure for my upcoming book, I hoped. My readership stats climbed steadily until I received an email from Patrice Greanville of the socialist Greanville Post on April 4 with a warning from Google:

Patrice told me that, since Google downrated his site as part of its fake news campaign the Post had become almost invisible in their searches.

The next day I received a message from the Financial Times (to which I subscribed) informing me that my comments would be blocked thenceforth and, lo! they were:

I told another China-friendly FT commenter and he replied, “I was blocked last week.” When I checked the comment sections of China stories I found that positive comments had disappeared. One comment from a virulent China-basher, caught my eye, “Where are the wumao[9]? Have the fifty-centers given up?”

Three days later the leading comment plugin Disqus, which supports 750,000 websites and 35 million users, blocked me from a broad range of publications: 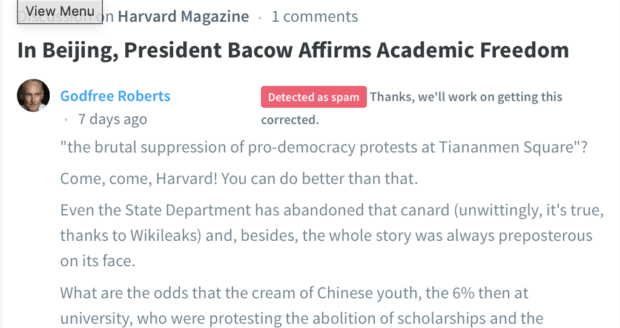 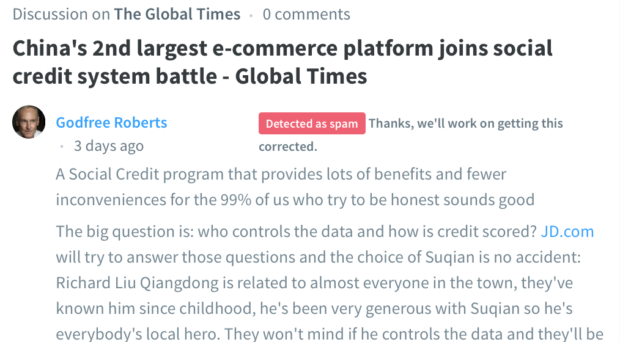 I was also blocked from several university-run China sites and two established China news services, Sinocism and SupChina (to which I also subscribe), whose mission is to publish negative stories about China. Yet uncensored fora like Unz Review, Greanville Post and Quora demonstrate that there is high and growing interest in fact-based China news–and growing suspicion of a frame-up. There is also–as we see daily in these pages–a growing awareness of our own censorship regime though a lack of knowledge about its makeup and authority.

We know that less than half of us trust our media and we know that, despite a Constitutional prohibition, we are censored. But we don’t know who our censors are, their goals or where to seek redress. Neither Congress, the Administration nor the courts are willing to admit the problem, which suggests that they are party to it. 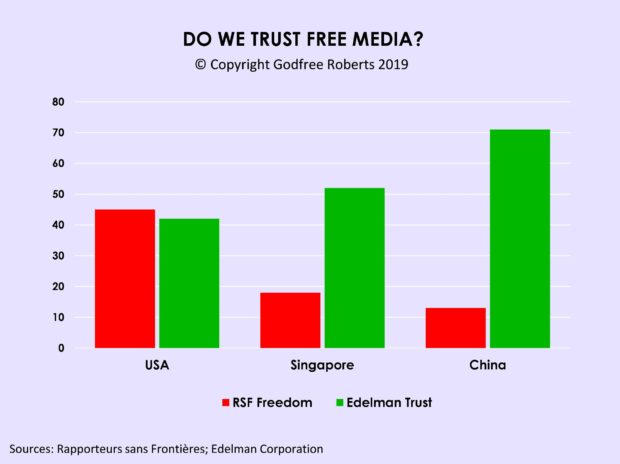 Singapore’s Lee Kwan Yew,[12] whose relationship to media is both notorious and enlightening, told the American Society of Newspaper Editors why this is so.

”The Philippines press enjoys all the freedoms of the US system but fails the people: a wildly partisan press helped Philippines politicians flood the marketplace of ideas with junk and confuse and befuddle the people so that they could not see what their vital interests were in a developing country. And, because vital issues like economic growth and equitable distribution were seldom discussed, they were never tackled and the democratic system malfunctioned. Look at Taiwan and South Korea: their free press runs rampant and corruption runs riot. The critic itself is corrupt yet the theory is, if you have a free press, corruption disappears. Now I’m telling you, that’s not true. Freedom of the press, freedom of news critics, must be subordinated to the overriding needs of the integrity of Singapore and to the primacy of purpose of an elected government.”

Politicians must use only such language as is proper for public speech and only speak of what is practical and proper to effect. Confucius, Analects 13.3.

The censorship scene in China could hardly be more different.

For two thousand years the Chief Censor has been a public intellectual and the incumbent, Wang Huning, is typical. He’s the most famous intellectual in a nation of intellectual-worshippers. His Master’s thesis, From Bodin to Maritain: On Sovereignty Theories Developed by the Western Bourgeoisie, won wide acclaim and millions watched him twice lead Fudan University to victory in the international Intercollegiate Debating Championships. After his PhD thesis, Comparative Political Analysis, became a famous book (one of twelve he’s authored) he became the youngest professor in Fudan’s history and headed its Law School until former President Jiang Zemin, quoting verbatim passages from his book, persuaded Wang to turn speechwriter. Jiang’s successor promoted him to the 25-man Politburo and his successor, President Xi, invited Wang to join his six man cabinet and his band of travelling companions. That makes three successive presidents who have esteemed him more than their predecessors.

Everyone knows Wang’s bio, his job description and the constitutional source of his authority: “Once a policy has been widely discussed, voted on and legislated, discussion is suspended while everyone unites to implement it.”

Wang’s part of a feedback loop helping to keep the leadership honest and his responsibilities are bidirectional: he must market leadership’s ideas to the citizenry and market their complaints to his colleagues.

As an intellectual he encourages free expression, says Harvard’s Gary King, “Contrary to much research and commentary, the purpose of the censorship program is not to suppress criticism of the State or the Communist Party. Indeed, despite widespread censorship of social critics, we find that when Chinese people write scathing criticisms of their government and its leaders the probability that their post will be censored does not increase. Instead, censored tweets were equally likely to be against the state, for the state, irrelevant, or factual reports about events. Negative, even vitriolic criticism of the state, its leaders and its policies are not more likely to be censored.” Even investigative journalists,[13] though as embattled in China as elsewhere, publish front-page exposes in mainstream media with strong public support.

The Chinese are not naive about censorship. It’s is an honored public service, constitutionally and legislatively delimited, that operates in the glare of public scrutiny. Wang is often asked to explain his decisions[14] and I have yet to find accurate, useful or professional information blocked.

Deborah Fallows[15] found that over eighty percent of Chinese want their media regulated and eighty-five percent of those who do want the government doing it, as do most people in the world. Everyone everywhere trusts state outlets like the BBC twice as much as private media and seventy percent of Chinese trust their media–right in line with Singaporeans and their famously regulated media. If we want to find out what is really going on in our own country and abroad we must find ways to create trustworthy media, otherwise we’re fumbling in the dark.

For example, we’re told China steals our IP when there is zero evidence of theft and abundant evidence that they outspend us 4:1 on R&D. 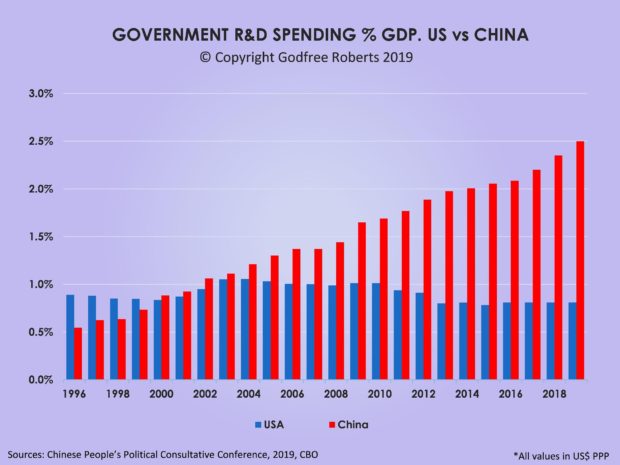 That’s mad. If we don’t know that underinvestment in research cost us the 5G race, or that Chinese scientists do half of our domestic research, how can we respond effectively–or at all?

The China Hoax is a cruel joke and the joke’s on us.

[1] National Security Letters are administrative subpoenas with gag orders enjoining recipients from divulging to anyone that they’ve been served.

[3] In 2011 President Obama ordered the execution of Anwar al Awlaki, an American citizen, for preaching Wahabbism and separately executed his sixteen-year-old son and eight-year-old daughter, all without trial.

[6] The CIA and the cult of Intelligence, by V. Marchetti. 1976. The first book an American government censored prior to publication

[9] An epithet flung at commenters who explain or justify Chinese policies. FP itself explains, “Wumao means ‘fifty cents’ in Chinese and is slang for web users who reliably take the government’s side. How to Spot a State-Funded Chinese Internet Troll. Foreign Policy, June 17, 2015.

[14] To complaints that he censored a viral essay, Beijing Has 20 Million People Pretending to Live Here, about the city being overrun by outsiders, he explained, “It polarizes relations between prosperous Beijingers and inflames ill feeling towards the vulnerable immigrants who sweep their streets.”