The last thing we expect mid-spring is snow.  Yet that’s just what we have. As theWeather Channel reports, “It may be late April, but Winter Storm Xyler will make you forget that it is spring in the Midwest this weekend as it is expected to bring some unusually heavy late season snowfall.”

Snow is heading to New York as well, despite the state’s all-out effort to combat global warming by attempting to ban plastic straws and now hot dogs. From theNew York Post, “Upstate NY may get up to 3 inches of snow this weekend.”

Across the country in Denver, the weather won’t be much different, as The Denver Channel reports, “Mild through the weekend, cold, rain and snow next week!” What’s going on? I thought the planet was heating up, with melting icecaps, rising sea levels, and less than 12 years before the earth burns to a crisp? 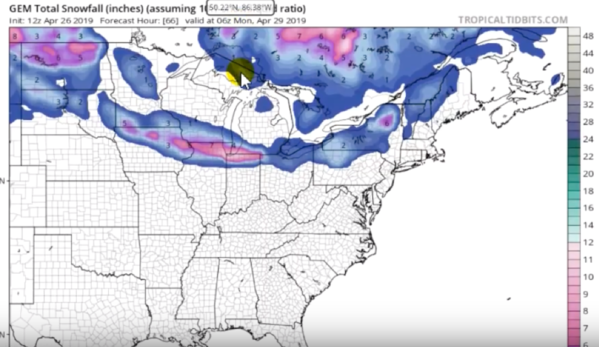 We have been hearing this song and dance for several decades now. The global warming chicken littles keep telling us that snow is a thing of the past and we had better get used to it, along with a warming planet.

In 2000, British newspaper The Independent ran this headline, “Snowfalls are just a thing of the past.” In 2014, The New York Times ran a sequel headline, “The end of snow?”

Yet here we are, at the end of April, planting our gardens and facing snow in much of the country. If this is evidence of global warming, then Bernie Sanders’s popularity is evidence that the Democrat Party has shifted to the right. Good luck selling that.

One important factor always neglected by the climate warriors is the Sun, a ball of fire a million times larger than the Earth, the source of life on Earth, as well as destruction if the fires ever were extinguished, or expanded. If we were a few million miles closer to or further from the Sun, life on Earth would cease to exist. Just look at Venus and Mars, neighboring planets either too hot or too cold, respectively, for life as we know it.

On the Basis of SexGood Will Hunting