Three Profoundly-important, Science-based Articles from India with Observations on the US sanctioned “Vaccine Holocaust of Newborns, Infants and Children”

(Whose parents, it needs to be said, have been well-trained to be obedient patients and therefore frequently accept – without hesitation and without doing their own research – allowing invasive procedures like multiple vaccines being injected simultaneously into the tiny muscles of their infants (combinations of which have never been proven to be safe).

Overwhelmingly, that parental consent is not “informed consent” as required by law. Uninformed consent is therefore often given without the parents being properly informed of the potential hazards, short or long-term. Therefore their children are at high risk of becoming sickened – sooner or later – with vaccine toxin-induced illnesses.

It is important that all parents or guardians of infants and children read the following information carefully and studiously before consenting to future vaccinations.) (2,365 words)

Aluminum and Mercury in Vaccines Linked to Neurological Disorders and Autism

Also Read the Following Brief Papers on the Neurotoxicity of Aluminium in Vaccines. Link.

The following recently published landmark and highly alarming peer-reviewed study has found the highest levels of aluminium in the brain of 5 autistic children. Link.

The 2017 US CDC (Centre for Disease CREATION and PROMOTION) vaccine schedule requires U.S. children from birth to age 6 to receive 50 doses of 14 vaccines, many of which contain both neurotoxic aluminium and mercury (thimerosal)!

Infants in the US are exposed from birth to age 2, to 24 vaccine doses, combining 8-in-1 vaccines to be given to infants 2, 4, and 6 months in a single visit! Babies receive 36 vaccine doses before they are 18 months old!

This is Criminal Insanity & State-Sanctioned Medical Murder of Newborns, Infants And Children! 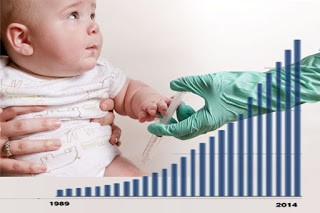 A report by EPA scientists Timing of Increased Autism Disorder Cumulative Incidence analyzed the cumulative incidence of autistic disorder during a 10-year period (1987–1996) pinpointed a sharp “changepoint” year (1988) when the incidence of autism sharply increased. The “changepoint” year is concomitant with the year childhood vaccination schedules expanded.
Source: http://ahrp.org/disconnect-between-evidence-cdc-claims-re-childhood-vaccination-schedule/

The CDC also suppressed the original findings of another of its own studies that found a 340% (3.6) relative increased risk of autism for African American male babies following MMR vaccination in accordance with the CDC-recommended Childhood Vaccination Schedule.

The alarming and damning scientific evidence, documents that infants exposed to vaccines laced with thimerosal during the first month of life are at alarmingly high increased the relative risk of serious harm. “The data on its toxicity (shows) it can cause neurologic and renal toxicity, including death,” writes Dr. Richard Johnston, M.D., an immunologist and pediatrician from the University of Colorado.

Dr. Verstraeten also said: “what I will present to you is the study that nobody thought we should do.” The study categorized the cumulative effect of thimerosal-containing vaccines administered to infants after one month of life and assessed the subsequent risk of degenerative and developmental neurologic disorders, and renal disorders before the age of six. Dr. Verstraeten stated that ALL of these relative risks were statistically significant.
Source: http://ahrp.org/betrayal-of-public-trust-institutional-corruption-vaccine-safety-ratings-vaccine-science-falsified/

Dr. Boyd Haley, former professor of medicinal chemistry and chairman of the chemistry department at the University of Kentucky, published a study in which he investigated the effect of combining aluminum hydroxide with thimerosal. In this study, cultured neurons showed no significant cell death six hours after they were exposed to just aluminum; more than 90% survived. Thimerosal alone also caused few neurons to die after six hours of exposure. Again, more than 90% survived. However, when cultured neurons were exposed to aluminum and thimerosal, only about 40% survived after six hours, clearly demonstrating synergistic toxicity (Figure 3). Source.

”Millions of children every year are injected with vaccines containing mercury and aluminum despite well-established experimental evidence of the potential for additive or synergistic toxicity when an organism is exposed to two or more toxic metals.

Dr. Haley’s study in which cultured neurons died at an accelerated rate following concurrent exposure to aluminum and thimerosal provides evidence of an enhanced detrimental effect. In addition, aluminum toxicity levels published by FDA indicate that two-month-old babies who are vaccinated according to CDC guidelines may be receiving quantities of aluminum that are significantly higher than safety levels.”

Statements from Prominent & Eminent Medical Doctors & Scientists on the Toxicity of Aluminium in Childhood Vaccines:

Both neurotoxic aluminium and mercury (thimerosal) contained in multiple doses of childhood vaccines as well as the CDC vaccine schedule cause severe and permanent neurological disorders including autism in newborns, infants and children!

When will the US sanctioned Vaccine Holocaust of newborns, infants and children end?

Vaccines Trigger a “Cytokine Storm” of the Immune System, Leading to Severe and Permanent Neurological Disorders, Brain Injuries and Autism.

The term “immune activation” describes the activation of the cellular components of the immune system. The developing brain can be injured by immune activation, with life-long consequences (Meyer 2009, Deverman 2009, Estes 2016, neusel 2014, Careaga 2017, Meyer 2014).

Human brain development is controlled by immune-system signals (i.e. “cytokines”). Activation of the immune system during brain development causes disruptions in these signals, resulting in permanent brain injury. The injury manifests as autism, schizophrenia and other mental illnesses. Adverse vaccine reactions are proven to stimulate a cytokine (interleukin-6) proven to cause autism.

Link to the paper. 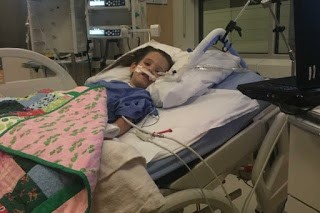 By Arya Vrilya – Tuesday, October 23, 2018 (906 words) Link. A new “unknown” and “mysterious” paralyzing neurological illness named Acute Flaccid Myelitis (AFM) has been paralyzing young children across the US and Canada since 2014. According to the US CDC, there have been 368 registered cases of AFM since 2014; 149 cases were registered in 2016 alone (the highest number of cases in any single year) and 68 cases have been reported so far in 2018.

“AFM is a rare, but serious condition that affects the nervous system. It specifically affects the area of spinal cord called gray matter and causes muscles and reflexes to become weak. In most cases, the patient’s arms or legs become weak, similar to the results of infection with polio. In some cases, patients recover quickly. In other cases, patients remain paralyzed. There is a lot we don’t know about AFM, and I am frustrated that despite all of our efforts, we haven’t been able to identify the cause of this mystery illness,” said Dr. Nancy Messonnier, director of the CDC’s National Center for Immunization and Respiratory Diseases.

According to the Public Health Agency of Canada, there were fewer than five cases reported in Canada between January and August 2018. However, over the last few weeks, more than 20 additional cases were alarmingly reported in Canada including 6 in Montréal, Québec.

In Septembre 2018, a four-year old Canadian girl from Québec (Geneviève Blais, pictured above) was diagnosed with AFM in Québec. Her treating physician Dr. Christos Karatzios, a Pediatric Infectious Diseases Specialist at Montréal Children’s Hospital briefly explained the “mysterious” illness of his patient in the following television interviews:

Listen to the doctor’s TV interview in English

In response to a question on his FB page about this “mysterious” paralyzing neurological illness, Dr. Karatzios wrote:

“We are actually uncertain what exactly is causing it, but we suspect it to be an enterovirus – similar to polio virus (that is also an enterovirus but has been pretty much eradicated because of vaccination) We suspect enterovirus D68 or 71. We have not been able to easily isolate it from the spinal fluid and so we can only make an association when we isolate it in saliva or stool. Very similar clinical symptoms to polio but can be caught like a cold.”

In other words, there is no conclusive scientific evidence to confirm a causal relationship between the “suspected” enterovirus D68 or 71 and the “mysterious” crippling neurological illness (AFM) that is causing myelitis paralysis in young children.

I, in turn, asked Dr. Karatzios whether this new “mysterious” paralyzing neurological illness could be caused by a long list of mandatory or recommended vaccines administered to newborns, infants and children that contain neurotoxic mercury (thimerosal) and/or aluminium which are extremely neurotoxic for the central nervous system and the developing brain of newborns, infants and children ?

Transverse Myelitis and Vaccines: A Multi-Analysis 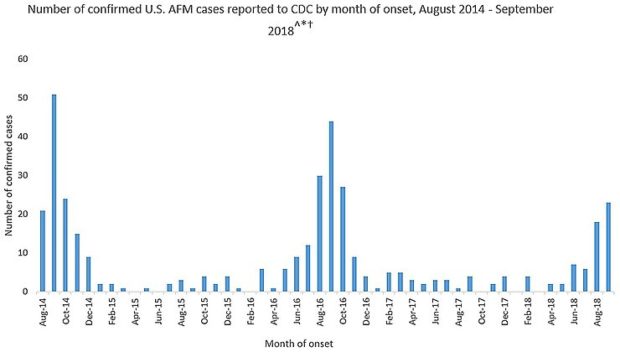 Acute Flaccid Myelitis (AFM) is also an adverse “side effect” of the polio vaccine. In fact, over 47,500 children in India were paralyzed after being injected with the polio vaccine a few years ago. AFM, also known as Acute Flaccid Paralysis (AFP) or non-polio AFP (NPAFP), has been reported since 2014 as a “mysterious polio-like illness”.

In a paper published in the Indian Journal of Medical Ethics in 2012, Neetu Vashisht, MD and Jacob Puliya, MD wrote: “Clinically indistinguishable from polio paralysis but twice as deadly, the incidence of NPAFP was directly proportional to doses of oral polio vaccine received.” 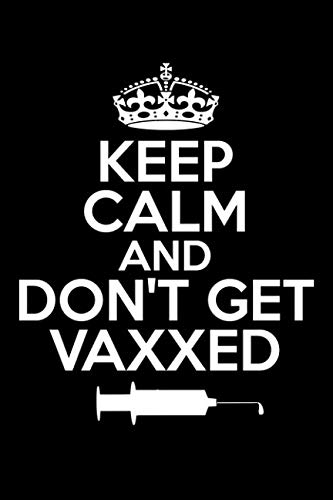 Dr Karatzios, however, categorically denies that vaccines could be causing transverse myelitis in children by arguing that patients that he diagnosed with AFM had not been vaccinated 2 months prior to contracting the “mysterious” paralyzing illness.

In response, I argued that most neurological vaccine injuries often manifest several months or years after the administration of the vaccine; moreover, several published studies cited in the linked articles above have found a causal link between vaccine and transverse myelitis, including AFM. And last but not least, the vaccines package inserts CLEARLY list transverse myelitis as an adverse “side effect” of several vaccines administered to children and adults alike.

Note: Dr. Karatzios has deleted both his FB post and our correspondence exchanged on his FB page.

(Arya Vrilya is the executive director of the Yajna Centre in India, whose mission and objective is to build a non-violent economic architecture based on the foundation of Non-Violence laid by Mahatma Gandhi. He researches and writes incisively about international issues, especially concerning human and environmental health matters that are usually caused by exploitive multinational profit-making corporations and the unjust power that they wield.)

Previous article by Gary G. Kohls, MD: What Could Possibly Go Wrong With This (Continuously Increasing)