Silver Shortages are Here and Gold Scarcity Is Coming

MMT is the socialists’ dream. It officially stands for Modern Monetary Theory but a more appropriate name would be More Money Theory. Because MMT is just a fancy name to justify more money printing, more deficits and more debts. Socialists love MMT, because for a sovereign nation, it justifies constantly living above your means.

This is of course nothing new for the US which has practised MMT for soon 70 years. Not since the early 1960s has the US had a real budget surplus. Europe has had socialist governments for decades, but for the US it is a relatively new phenomenon. Alexandria Ocasio-Cortez (AOC) has now picked up the baton from Krugman, arguing that socialism and deficit spending is the solution to the US problems and the world’s.

Trump, who normally is as far from a socialist as you can get, is nevertheless applying MMT to the US economy by continuing to spend money that doesn’t exist. His tax cutting and uber-spending, combined with the imminent downturn of the US economy, will soon put the US in the same category as countries like Italy. That is what is called the basket case category where default will be unavoidable.

As opposed to Italy, the US can print its own money. And they continue to do at an ever increasing rate. Just look at the chart below which shows the only way the US government knows how to grow GDP. But we must remember that printing unlimited amounts of worthless money leads to a total debasement of the currency which is just another form of default.

How can anyone believe that any of the values we are looking at today are real. Bezos and his wife are worth $150 billion and his company Amazon has a Market Cap of $1.4 trillion. These are just fantasy numbers. And so are all the other billion and trillion dollar values that have been created out of nothing. So the US government has printed $13 trillion since 2008. And the world as a whole has increased total debt by $125 trillion. It is all this money that has created the illusory wealth in the world in this century.

Very few people realise that these telephone book numbers will all vanish in the next crisis and lose 90 to 100% in nominal value.

REAL GDP GROWTH HAS BEEN NEGATIVE SINCE 2000

Looking at the growth in GDP, based on real inflation (ShadowStats), real GDP growth has grown by less than 2% annually since 1990. And since 2000, real GDP growth in the US has been negative. The reason for that is obvious. The US has printed $4 to achieve $1 increase in nominal GDP. But the nominal figure is totally meaningless since it has only been achieved by printing $13 trillion of fake money that has ZERO value. How can anyone believe that you can create wealth by just creating money out of thin air. If an individual prints fake money, that would be a blatant fraud and he would end up in prison. 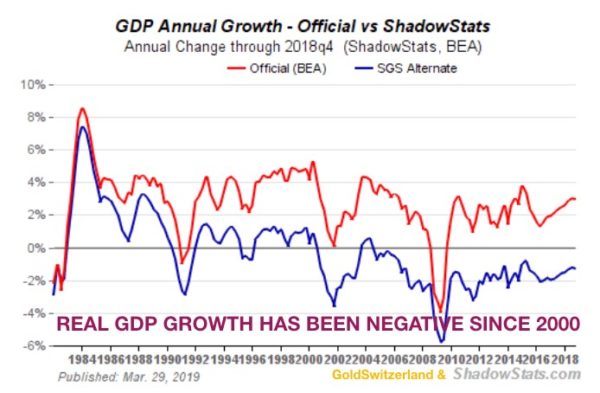 Assange and the Unforgivable SinThe Cascading Cat Litter of Truth