This excellent book mirrors in its choice of contributors the odd relationship between Ayn Rand and libertarianism. On the one hand, her own proposals for the political organization of society are a version of minimal state libertarianism, and her novels and essays have had an enormous impact on many libertarians. On the other hand, she not only denied she was a libertarian but denounced libertarianism in characteristically fierce fashion. The anarchist position of Murray Rothbard especially aroused her opposition.

Many of the contributors to the book are members of the “official” Objectivist organization of philosophers, the Ayn Rand Society, but others, including Matt Zwolinski, Peter Boettke, and Michael Huemer, are not Objectivists. The “official” Objectivists are more inclined than was Rand herself to acknowledge the similarity between her political thought and libertarianism, but, like her, they criticize libertarianism and denounce Rothbard’s anarchism. 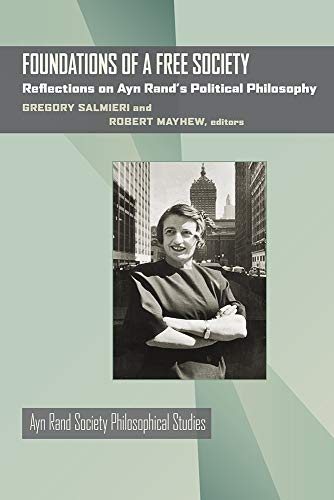 In what follows, I shall address the criticisms of Rothbard’s anarchism, as these are likely to be of most interest to readers of mises.org. Before turning to this, though, I should like to examine the more general criticism of libertarianism raised by the Objectivists, as this has considerable philosophical value.

Given the manifest similarity between Rand’s political proposals and minimal state libertarianism, why are Objectivists so critical of libertarianism? One is tempted to ask them, “All right, you don’t like anarchism, but why isn’t support for a minimal state that has no power to tax and for laissez-faire capitalism enough for you? What more do you want?”  Their answer is that non-Objectivist libertarianism lacks proper philosophical foundations. In the absence of these foundations, libertarians are unable adequately to support their political conclusions.

As an example, Darryl Wright, a philosophy professor at Harvey Mudd College and a rising star among Objectivist philosophers, criticizes Rothbard for not grounding his non-aggression principle in normative ethics. Although Rothbard accepted an ethics of natural law, he also held that political philosophy was autonomous, and this was his fatal error: “The source of the difficulties with Rothbard’s conception of aggression. . .lies in a particular way of understanding self-ownership, which in turn proceeds from Rothbard’s commitment to what I will call the autonomy of political philosophy. By this I mean the view that political philosophy should be independent of normative ethics—that is, independent of any substantive ethical theory applicable to the whole of one’s life.” (p.107). More generally, Wright says, “Since Rand’s approach to philosophy is holistic, a proper understanding of the[non-initiation of force] principle requires us to see how it grows out of her more fundamental positions in ethics and epistemology. . .” (p.16)

Harry Binswanger, who along with Leonard Peikoff is the most senior philosopher of the Ayn Rand Society, in his response to Michael Huemer also stresses the need for foundations: “Rand repeatedly criticized the libertarians for treating the non-initiation of force principle as if it were an axiom, observing that is a quite derivative principle, requiring a complete philosophic base.” (p.273)

What are the proper ethical foundations? Here the Objectivists begin from an indisputable truth: Human beings need to use reason in order to survive. Animals survive through instinct, but for human beings, as Wright says, “functioning is not determined by our genetics. . .We must create the equivalent state [to that of animals] in ourselves—in our souls—a state that can underwrite the basic kinds of cognitive and existential actions that our lives require over their entire span.” (p.18) (When I say that this truth is indisputable, I do not mean to endorse the use that Objectivists make of it in ethical theory. That is far from indisputable.)

Human beings need reason to survive, but what is reason? Here Rand’s theory of concept formation comes to the fore. We abstract concepts through “measurement omission” from preconceptual perceptual states. From these concepts, further abstractions take place, and this process continues, creating a hierarchy of concepts. However high the hierarchy grows, it is grounded in first-level concepts abstracted from percepts.

I do not propose here to dispute this account of concepts, but two uses of the theory, much emphasized by Objectivists, do not follow from it. Suppose it is right that the mind acquires concepts in just the way that Rand suggests. It is a further step, and one that seems to me unsupported, to say that we ought to bring this process of hierarchical concept formation under our conscious control. That is to say, Objectivists hold that we ought to trace our concepts back to their perceptual foundation and that, at each stage in the hierarchy, we should be able to produce a clear definition of the concept abstracted at that stage.

Perhaps the process of abstraction operates better when it proceeds without conscious direction. What exactly is the argument that it does not? Are those who endeavor to bring concept formation under conscious control better able to survive than those who do not? That seems a matter open to investigation, and I am unaware of any studies that show this to be the case. To sharpen what is at issue, the question I raise is not whether those who are rational are more likely than the irrational to survive. Rather, it is whether rationality requires, or even suggests, that consciously tracing concepts to their grounding in perception is more rational than not doing so. To anticipate an objection, in speaking of the need for investigation I am not assuming the truth of the analytic-synthetic dichotomy, brought into question in a famous essay by Leonard Peikoff. I do not claim that all truths not in a narrow sense “analytic” are contingent; rather, I question whether a particular claim about reason is true, let alone necessarily true. Objectivists have moved uncritically from the obviously true claim that we need reason to survive to the unsupported claim that using our reason in a particular way aids our survival.

There is another claim made by Objectivists that seems to me dubious. They stress a proper hierarchy of knowledge, in which one begins with a theory of concepts, used to ground ethics, which in turn grounds political philosophy. The theory of concepts on this view is at the most fundamental level. It does not follow from this that the hierarchy may be without argument transmuted into a theory of historical causation, according to which beneficial or harmful political doctrines stem ultimately from the theory of concepts held by their advocates. This theory of causation is basic to the account of Nazism in Dr. Peikoff’s well-known book The Ominous Parallels a book that in my opinion does not succeed in making its case. 2

Before turning to the criticisms of Rothbard’s anarchism, I should like to make one further point about Rand’s philosophy. Objectivists contend that the concept of value stems from life. Not only is the Objectivist account of value better than rival theories of value, it is the sole basis for the concept of value. As Dr. Binswanger states, “The essential point is this: only life makes possible an objective, nonarbitrary distinction between value and disvalue, or good and bad. . .It is the conditionality of life upon action that creates good-for and bad –for.”(p.265, emphasis in original)

Let us now turn to the criticisms of Rothbard’s anarchism. To a large extent, these criticisms rest on a misapprehension of Rothbard’s position. For example, Dr. Binswanger assumes that on an anarcho-capitalist view, people are free to exercise force at their discretion. He contrasts this with Rand’s position, in which the use of force is based on objectively true standards. “The attempt to invoke individual rights to justify ‘competing’ with the government collapses at the first attempt to concretize what it would mean in reality. Picture a band of strangers marching down Main Street, submachine guns at the ready. When confronted by the police, the leader of the band announces: ‘Me and the boys are only here to see that justice is done, so you have no right to interfere with us.’ According to the ‘libertarian anarchists,’ in such confrontation the police are morally bound to withdraw, on pains of betraying the rights of self-defense and free trade.” (p.229)

Against this, Dr. Binswanger says: “In fact, of course, there is no conflict between individual rights and outlawing private force: there is no right to the arbitrary use of force. No political or moral principle could require the police to stand by helplessly while others use force arbitrarily—that is, according to whatever private notions of justice they happen to hold.” (p.229)

This objection has no relevance to Rothbard’s position. He too believed in an objective law code, largely based on the tradition of common law, not on agencies with conflicting views deferring to one another or “fighting it out.” In a review of Bruno Leoni’s Freedom and the Law, he says: “In short, there exists another alternative for law in society, an alternative not only to administrative decree or statutory legislation, but even to judge-made law. That alternative is the libertarian law, based on the criterion that violence may only be used against those who initiate violence, and based therefore on the inviolability of the person and property of every individual from “invasion” by violence. In practice, this means taking the largely libertarian common law, and correcting it by the use of man’s reason, before enshrining it as a permanently fixed libertarian code or constitution. And it means the continual interpretation and application of this libertarian law code by experts and judges in privately competitive courts.” See, e.g. this article regarding law without legislation.

Another objection to anarcho-capitalism also fails. Dr. Binswanger advances a starling claim: “Ultimately, anarchists who oppose monopoly government have to end up as pacifists. This is because all force is monopolistic. . .There is no such thing as force that lets dissenters go their own way. Force does not tolerate ‘to each his own.’ Force is precisely the attempt to subjugate another’s will to one’s own. If force in self-defense is justified, this means that monopolizing an interaction is justified. If I use force to defend myself against an aggressor I am not trying to persuade him—I am attempting to stop him from acting as he chooses. If the government monopolization of force were wrong, so would be the private use of force by individuals. The argument against government’s monopoly on force is thus an argument against self-defense, and it leads to pacifism.” (p.278)

This objection baffles me, because it has nothing to do with the dispute between Rothbard and supporters of Rand’s minimal state. Whether using force against an aggressor is inconsistent with persuasion may well be a significant issue, but the question at issue is whether objective law requires a state. Even if Dr. Binswanger is right about persuasion and the aggressor, so what?

All of the essays in this collection merit careful study. I especially admire Lester Hunt’s outstanding analysis of rights as side constraints in “Ayn Rand and Robert Nozick on Rights”

Ayn Rand was an important thinker, but she was not always right.

1.I am grateful to Mr. Neil Parille for sending me a copy of this book and asking me to review it.

2.I hope I may be allowed a personal note. My review of the book, written for Inquiry so long ago as 1982, has been the second most criticized of all my reviews. My most criticized review was of a book written by an admirer of a well-known painting by Frans Hals.

Is the US Determined on Nuclear War With Russia?The Contrived Assange Debate