At least in this generation…

Dispensationalism is a doctrine that is only about two-hundred years old, and in the Christian world is fundamentally embraced only in America.  Jesus never mentioned it; neither did Paul.  Of course, neither mentions the word “Trinity” either – yet one can at least find the conceptual basis for this word in Scripture.  No such luck for dispensationalism.

The Orthodox Church describes dispensationalism as…

A heresy practiced by many Protestant groups, Dispensationalism is a form of premillennialism which narrates Biblical history as a number of successive “economies” or “administrations,” called “dispensations.” Each of these dispensations emphasizes the discontinuity of the covenants of God made with His various peoples.

Almost two millennia of Christian scholarship had not discovered it.  While Christian theologians from Augustine to Aquinas were busy working on such apparent trivialities as improving our understanding of the Scriptures and Biblical truth, somehow they missed this rather important doctrine.

…St. Augustine, writing in the late 300s and early 400s, interpreted the reference to a “thousand years” in Revelation 20 as a metaphor for the age of the Church.

What do Catholics say?

While Tim LaHaye, Hal Lindsey, and other popular dispensationalists teach that God has two people — the Church and Israel — the Catholic Church asserts that God has always had only one people, or family, throughout history.

And the early Reformation leaders?

…even Martin Luther and John Calvin understood the Church to be the true heir of Israel.

Dispensationalism first gained a footing through the teachings of John Nelson Darby (1800–82) who strongly influenced the Plymouth Brethren of the 1830s in Ireland and England.  According to this teaching, there are (up to) seven ages in the history of man and his relationship to God.

We are currently in the second-to-last age, the time of Grace – the period from the Cross to the Rapture of the Church.  The final dispensation will follow: the Millennial Kingdom – A 1000 year reign of Christ on earth, centered in Jerusalem. This dispensation ends with God’s judgment on the final rebellion.

Dispensationalism rejects the notion of supersessionism, still considers the Jewish people as God’s chosen people, and some see the modern State of Israel as resulting in the Israel who will receive the fulfillment of all God’s Old Testament promises.

This view is no longer limited to the small sect that is the Plymouth Brethren.  This idea is widely accepted in U.S. Protestant churches, with well-known figures such as John Hagee and Pat Robertson leading the charge.

Around the same time as this dispensationalist idea was being developed, there separately came a desire to restore a Jewish state.  Dispensationalism was going nowhere until it met up with this Zionist desire.  It was when these two met and wed that the heresy took firm root and gained ever-wider acceptance.

In walks Cyrus Scofield.  Who was he?

[In 1873] Scofield was forced to resign [as U. S. District Attorney for Kansas] “under a cloud of scandal” because of questionable financial transactions, that may have included accepting bribes from railroads, stealing political contributions intended for Ingalls [the senator from Kansas], and securing bank promissory notes by forging signatures.

He didn’t go to law school, yet became a US District Attorney.  His tenure didn’t last one year before resigning.

It is possible Scofield was jailed on forgery charges, although there is no extant evidence in the public records.

Converting to Christianity, Scofield was assisting Dwight L. Moody and served as the secretary of the St. Louis YMCA.  He came under the mentorship of James H. Brookes, pastor of Walnut Street Presbyterian Church, St. Louis, a prominent dispensationalist premillennialist.

Perhaps in part because of his self-confessed heavy drinking, Scofield abandoned his wife and two daughters during this period. Leontine Cerrè Scofield divorced him on grounds of desertion in 1883, and the same year Scofield married Hettie Hall von Wartz, with whom he eventually had a son.

He deserted to Texas.  In 1883 he was ordained as a Congregationalist minister – while his divorce was proceeding but not final – and accepted the pastorate of a small Congregational church in Dallas.  The church membership grew from fourteen to over five-hundred in the course of a dozen years.  By the 1890s, he styled himself “D.D.”, for Doctor of Divinity, but no records exist from any academic institution granting him this honorary degree.

In 1901, Scofield became a member of the Lotos Club, an exclusive New York men’s club.

The Lotos Club was founded as a gentleman’s club in New York City…. Its founders were primarily a young group of writers and critics. Mark Twain, an early member, called it the “Ace of Clubs”.

Its “State Dinners”…are legendary fetes for scholars, artists and sculptors, collectors and connoisseurs, writers and journalists, and politicians and diplomats. Elaborate souvenir menus are produced for these dinners.

It was at the Lotos Club in 1906 that George Harvey, editor of Harper’s Weekly, sent up his first trial balloon by proposing Woodrow Wilson for the office of President of the United States. In 1909, with financial backing from Andrew Carnegie, the clubhouse was moved to 110 West 57th Street, in a building designed by architect Donn Barber. 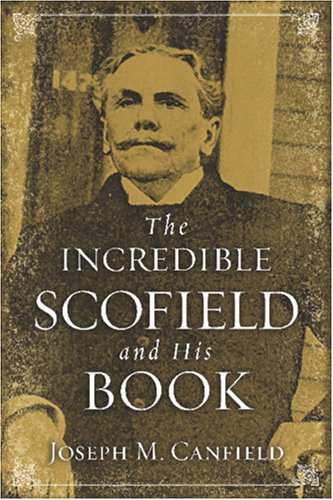 This was the big time.  Was Scofield president of a large law firm by this time?  A bank? Mayor of New York City?  Not exactly.  At the time of his invitation, Scofield was pastor of a small church in Massachusetts:

In his devastating biography, The Incredible Scofield and His Book, Joseph M. Canfield [his biography is worth a quick read] suggests, “The admission of Scofield to the Lotus Club, which could not have been sought by Scofield, strengthens the suspicion that has cropped up before, that someone was directing the career of C.I. Scofield.”

One could not “apply”; one had to be invited.  Maybe the club was looking for some diversity in its membership?  You know, ex-cons on the run from deserted wives and bilked colleagues?

That someone, Canfield suspects, was associated with one of the club’s committee members, the Wall Street lawyer Samuel Untermeyer. As Canfield intimates, Scofield’s theology was “most helpful in getting Fundamentalist Christians to back the international interest in one of Untermeyer’s pet projects—the Zionist Movement.”

Whoa there, big fella…. Don’t go all anti-Semitic on us.  Maybe it wasn’t Untermeyer, and maybe it was merely luck (could we say “Providence”?) that brought the guy who wrote the Bible notes that supported a Zionist state into such company as to be found in the Lotos Club.  Or maybe not.

Untermeyer was no lightweight.  I find at least one report that it was Untermeyer who got President Wilson to appoint Louis Brandeis to the Supreme Court.  From Alison Weir:

Even more surprising to this author – and even less well-known both to the public and to academics – is Brandeis’s membership in a secret society that covertly pushed Zionism both in the U.S and internationally.

Wilson was opposed to the Balfour Declaration until Brandeis convinced him otherwise.

Untermeyer took an active part in preparing the Federal Reserve Bank law.  Not exactly typical company for someone like Scofield.  Certainly Scofield’s theology would be attractive to anyone interested in a Zionist state, and anyone interested in moving American Protestantism toward supporting just such a state.

In short order, Scofield produced the first edition of his Scofield Reference Bible, first published in 1909 and then revised by him in 1917.  It is an edited and annotated version of the King James Bible.  It was published by Oxford University Press – at the time one of the premier publishers in the world.

How on earth did Scofield get such an audience?  A long track record of best-selling books was not in his history.  In any case, there he was.  And it probably didn’t hurt his chances to find that publisher Henry Frowde was very sympathetic to this theology as he was a member of the “Exclusive” Plymouth Brethren – an even more fundamental version of this small sect.

Scofield’s notes on the Book of Revelation are a major source for the various timetables, judgments, and plagues elaborated on by popular religious writers such as Hal Lindsey, Edgar C. Whisenant, and Tim LaHaye…

Cheerleaders for the two-hundred-million man army.  It will make 70 A.D look like a picnic.  Instead, those who live by this doctrine wish a literal version of this passage from Revelation upon Israel (and, ultimately, the world):

Revelation 16:17 The seventh angel poured out his bowl into the air, and out of the temple came a loud voice from the throne, saying, “It is done!”

18 Then there came flashes of lightning, rumblings, peals of thunder and a severe earthquake. No earthquake like it has ever occurred since mankind has been on earth, so tremendous was the quake.

19 The great city split into three parts, and the cities of the nations collapsed. God remembered Babylon the Great and gave her the cup filled with the wine of the fury of his wrath.

20 Every island fled away and the mountains could not be found.

21 From the sky huge hailstones, each weighing about a hundred pounds, fell on people. And they cursed God on account of the plague of hail, because the plague was so terrible.

It is for this that today’s dispensationalist Zionist Christians pray.  An evil prayer for an evil outcome.  For some reason, I don’t believe that the Jewish Zionists who encourage the Christian Zionists in this view take the same passage quite the same way.  All the while, millions suffer every day in support of this cause.

Joshua 21: 43 So the Lord gave Israel all the land he had sworn to give their ancestors, and they took possession of it and settled there.

45 Not one of all the Lord’s good promises to Israel failed; every one was fulfilled.

Emphasis added; note the tense.  Frankly, it was all downhill for national Israel after that – they took a king, divided the empire, were taken captive, lived under Roman rule, etc.

If God one day asks me why I didn’t support His plans for Zionism and Armageddon as taught in US Christian churches today (He won’t), I will suggest to Him that if this, in fact, was His plan, He certainly didn’t need my help to bring it about.  Instead, I figured I would do something to bring my understanding of peace and justice to this world – I am much more of a Sermon-on-the-Mount kind of guy.  I suspect this will be a satisfactory response.

Is Joe Biden the White (Bogey )Man He Warned Us About? Hate-Based Faith