The Dawn of Big Government and the Administrative State

New book correctly diagnoses how non-elected agencies are running the country, but falls short on how it got this way.

John Marini, who writes for the Claremont Review of Books and is a professor at the University of Nevada, Reno, has devoted his newest book to the origins and growth of the American administrative state. Marini recognizes that he is dealing with a critical turning point in American government. To his credit, he refuses to examine it nonchalantly, as the natural development of a benevolent state that exists as an indispensable answer to our needs. According to Marini, rule by unelected administrators who are empowered to intervene in a wide range of human relations, to regulate the behavior of citizens and to enforce their own values, was not part of our original political design. It represents a dramatic departure from what our federal union was intended to be, and a deviant model that may already be beyond our control.

As someone who wrote a book on a related subject, I was eager to learn how Marini treated the growth of centralized public administration in the United States. It may be appropriate to divide his analysis into two sections—one that shows how our administrative behemoth has eaten into social, cultural, and commercial activities; and another that focuses on the ideological preconditions for that development. His book in my view addresses the first better than the second. 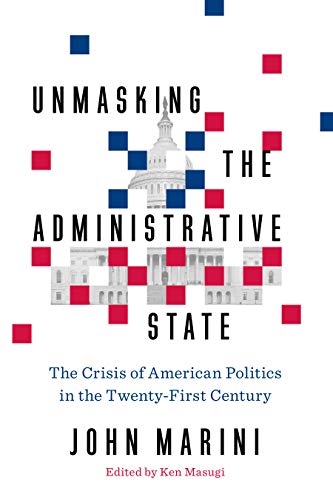 Marini begins by examining the role of the federal government in helping to topple the Nixon administration, a topic that he’s treated before. He argues compellingly that by “the time of Nixon’s reelection in 1972, he posed the greatest danger to the authority of the bureaucracy and the administrative state.” Unlike Reagan, who also awakened the deep state’s “political animosity” but who managed to appear jovial, Nixon went after them with undisguised loathing. He stressed in his second inaugural address his intention to “diffuse” political power among various levels of government. His downfall, at least partly caused by his impetuous behavior, signaled to office-holders the danger of messing with powerful foes. Now Trump has broken with that unwritten rule and incurred the wrath of our unelected government and its far-ranging allies in the media, public education, and Hollywood. Anyone who threatens what Marini calls the “new despotism” posed by centralized administration runs the risk of being destroyed by it.

Marini is correct that the Progressives played a gigantic role in justifying and building an American administrative state. But he may go too far in indulging his own grievance about Progressives being racists, anti-immigrationists, and social Darwinists—which is largely beside the point in any case. What made the Progressives a significant historical force was not that they held conventional views for their times. It was that, as Marini certainly knows, they identified popular government with public administration and a “science of government.” And contrary to what the GOP media tell us, self-described Progressives belonged to and influenced both national parties.

Seemingly unaware of this, the author devotes an entire chapter to a questionable divide between FDR’s political legacy and that of Ronald Reagan. Whereas FDR favored an administrative regime “that would guarantee social and economic security for all,” Reagan, as Marini put it elsewhere, “succeeded in mobilizing a powerful sentiment over the excesses of big government. In doing so, he revived the debate over the importance of limited government for a free society. And his theme would remain constant throughout his presidency.” But did Reagan’s rhetoric about “limited government” mean that he set out to reverse FDR’s reforms? Guess again! Marini’s model president mostly took for granted a vast administrative apparatus that he inherited from his predecessor. And this welfare state intruded into our daily lives to a far greater extent than the government bequeathed to posterity by the New Deal.