Open Borders or Not? Not.

I’m against open borders. I think this self-evidently will destroy the country. The consequences will include cities and states unable to cope with the demands placed upon them in all spheres: policing, education, welfare, disease control, rodent control, proper housing, traffic control, etc. These burdens will be associated with costs being borne by taxpayers.

Open borders will have a negative impact on the country’s politics and political system, moving it to a less libertarian position. This is basically one of the arguments made by Hans-Hermann Hoppe in “A Realistic Libertarianism“.

This is a common method of analysis. For example, will eliminating the minimum wage (#1) result in a more libertarian (#2) or less libertarian (#3) country? There are thousands of articles written by libertarians that use this approach. Often the analysis becomes one of deciding whether or not there will be a reduction in the initiation of violence (going from #1 to #2) or an increase in such violence (going from #1 to #3). 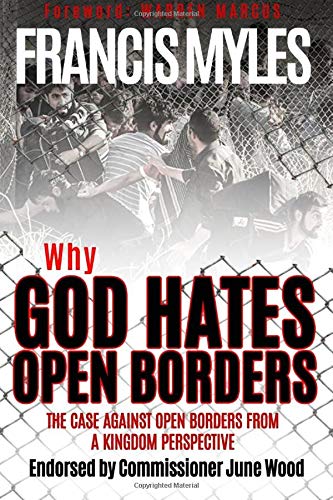 Unlimited mass immigration will favor more mass democracy in America. More democracy is inimical to the implementation of libertarian principles. It involves more voting on more issues, and the result is more initiation of violence through politics.

In addition, a broadened and intensified democracy creates so much disorder and violence that it often ends up with a demand for order from a strong man dictator. Authoritarian governments result.

I conclude that greater imposition of mass democracy via mass uncontrolled immigration will move us to a less libertarian country. We’ll go from position #1 to position #3, not to position #2.

Democracy in America has never been constant. It has increased unevenly since the U.S. began. As democracy has increased, freedom and rights have decreased. See here for some statements that disparage democracy. The men who gave us a republic rejected democracy as our form of government:

“At its birth, the United States was not a democratic nation—far from it. The very word ‘democracy’ had pejorative overtones, summoning up images of disorder, government by the unfit, even mob rule. In practice, moreover, relatively few of the nation’s inhabitants were able to participate in elections: among the excluded were most African Americans, Native Americans, women, men who had not attained their majority, and white males who did not own land.

“John Adams, signer of the Declaration of Independence and later president, wrote in 1776 that no good could come from enfranchising more Americans:

“Depend upon it, Sir, it is dangerous to open so fruitful a source of controversy and altercation as would be opened by attempting to alter the qualifications of voters; there will be no end to it. New claims will arise; women will demand the vote; lads from 12 to 21 will think their rights not enough attended to; and every man who has not a farthing, will demand an equal voice with any other, in all acts of state. It tends to confound and destroy all distinctions, and prostrate all ranks to one common level.”

I believe that my argument is basically the same as one of Hans-Hermann Hoppe’s arguments; but if I’ve misstated it, over-simplified it or mangled it, that’s my fault, not his.

Our Planet Is Not FragileForced Blood Draws and Implied Consent Laws