The struggle with weight gain and obesity is a common and costly health issue, leading to an increase in risk for heart disease, Type 2 diabetes and cancer, just to name a few.

Research has linked growing waistlines to a number of different sources, including processed foods, sodas and high-carbohydrate diets. Risks associated with belly fat in aging adults includes an elevated risk of cardiovascular disease and cancer.2

Researchers have actually predicted obesity will overtake smoking as a leading cause of cancer deaths,3 and recent statistics suggest we’re well on our way to seeing that prediction come true as obesity among our youth is triggering a steep rise in obesity-related cancers at ever-younger ages.

Millennials More Prone to Obesity-Related Cancers Than Their Parents

As obesity rates rise, so do related health problems, including cancer. According to a report4 on the global cancer burden, published in 2014, obesity is already responsible for an estimated 500,000 cancer cases worldwide each year, and that number is likely to rise further in coming decades.

As reported in a recent Lancet study5 by the American Cancer Society, rates of obesity-related cancers are rising at a far steeper rate among millennials than among baby boomers. According to the authors,6 this is the first study to systematically examine obesity-related cancer trends among young Americans.

What’s more, while 6 of 12 obesity-related cancers (endometrial, gallbladder, kidney, multiple myeloma and pancreatic cancer) are on the rise, only 2 of 18 cancers unrelated to obesity are increasing. As noted in the press release:7

“The obesity epidemic over the past 40 years has led to younger generations experiencing an earlier and longer lasting exposure to excess adiposity over their lifetime than previous generations.

Excess body weight is a known carcinogen, associated with more than a dozen cancers and suspected in several more … Investigators led by Hyuna Sung, Ph.D., analyzed 20 years of incidence data (1995-2014) for 30 cancers … covering 67 percent of the population of the U.S…

Incidence increased for 6 of the 12 obesity-related cancers … in young adults and in successively younger birth cohorts in a stepwise manner. For example, the risk of colorectal, uterine corpus [endometrial], pancreas and gallbladder cancers in millennials is about double the rate baby boomers had at the same age …

‘Although the absolute risk of these cancers is small in younger adults, these findings have important public health implications,’ said Ahmedin Jemal, D.V.M., Ph.D., scientific vice president of surveillance [and] health services research and senior/corresponding author of the paper.

‘Given the large increase in the prevalence of overweight and obesity among young people and increasing risks of obesity-related cancers in contemporary birth cohorts, the future burden of these cancers could worsen as younger cohorts age, potentially halting or reversing the progress achieved in reducing cancer mortality over the past several decades.

Cancer trends in young adults often serve as a sentinel for the future disease burden in older adults, among whom most cancer occurs.'”

Studies8,9,10 have repeatedly demonstrated that when people switch from a traditional whole food diet to processed foods (which are high in refined flour, processed sugar and harmful vegetable oils), disease inevitably follows. 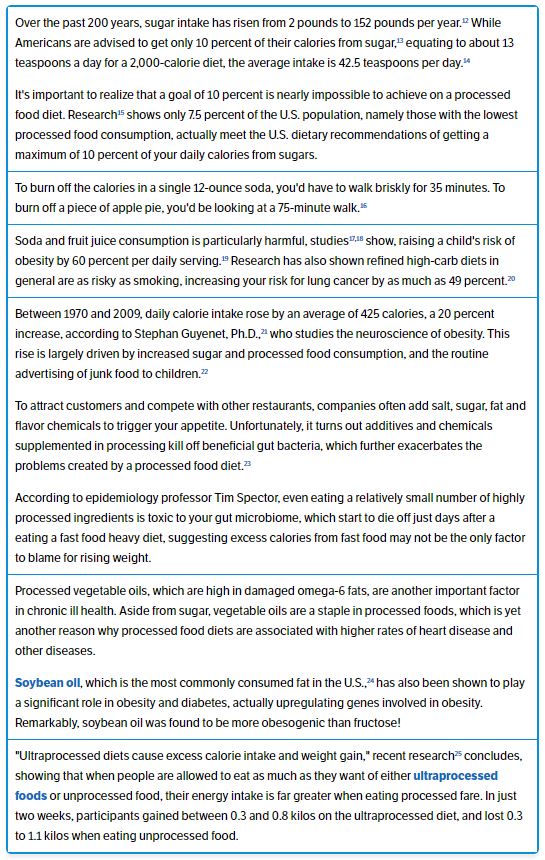 As Ultraprocessed Food Has Become the Norm, so Has Chronic Illness

Unfortunately, Americans not only eat a preponderance of processed food, but 60 percent of it is ultraprocessed26 — products at the far end of the “significantly altered” spectrum, or what you could typically purchase at a gas station.

The developed world in general eats significant amounts of processed food, and disease statistics reveal the inherent folly of this trend. There’s really no doubt that decreasing your sugar consumption is at the top of the list if you’re overweight, insulin resistant, or struggle with any chronic disease. 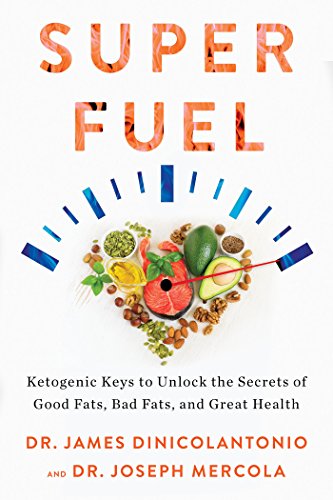 It’s been estimated that as much as 40 percent of American health care expenditures are for diseases directly related to the overconsumption of sugar.27 In the U.S., more than $1 trillion is spent on treating sugar and junk food-related diseases each year.28

Any foods that aren’t whole foods directly from the vine, ground, bush or tree are considered processed. Depending on the amount of change the food undergoes, processing may be minimal or significant. For instance, frozen fruit is usually minimally processed, while pizza, soda, chips and microwave meals are ultraprocessed foods.

In a cross-sectional study30 using data from the National Health and Nutrition Examination Survey of over 9,000 participants, researchers concluded that “Decreasing the consumption of ultraprocessed foods could be an effective way of reducing the excessive intake of added sugars in the USA.”

As a general rule, ultraprocessed foods can be defined as food products containing one or more of the following: 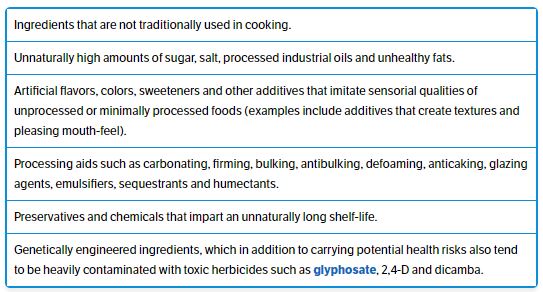 As described in the NOVA classification of food processing,31 “A multitude of sequences of processes is used to combine the usually many ingredients and to create the final product (hence ‘ultraprocessed’).” Examples include hydrogenation, hydrolysation, extrusion, molding and preprocessing for frying.

This link remained even after taking confounding factors such as smoking, obesity and low educational background into account. As you’d expect, the primary factors driving the increased death rate was chronic diseases such as heart disease and cancer. 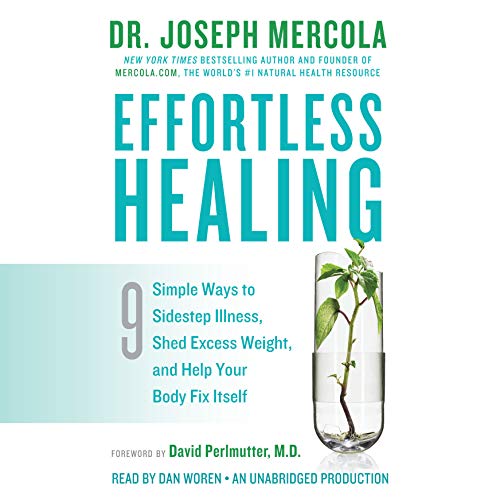 Nita Forouhi, a professor at the MRC Epidemiology Unit at the University of Cambridge, who was not part of the study, told The Guardian:34

“The case against highly processed foods is mounting up, with this study adding importantly to a growing body of evidence on the health harms of ultraprocessed foods … [W]e would ignore these findings at public health’s peril.

A vital takeaway message is that consumption of highly processed foods reflects social inequalities — they are consumed disproportionately more by individuals with lower incomes or education levels, or those living alone.

Such foods are attractive because they tend to be cheaper, are highly palatable due to high sugar, salt and saturated fat content, are widely available, highly marketed, ready to eat, and their use-by dates are lengthy, so they last longer. More needs to be done to address these inequalities.”

Another French study35,36 published last year also found that those who eat more ultraprocessed food have higher rates of obesity, heart problems, diabetes and cancer. Nearly 105,000 study participants, a majority of whom were middle-aged women, were followed for an average of five years.

On average, 18 percent of their diet was ultraprocessed, and the results showed that each 10 percent increase in ultraprocessed food raised the cancer rate by 12 percent, which worked out to nine additional cancer cases per 10,000 people per year.

The risk of breast cancer specifically went up by 11 percent for every 10 percent increase in ultraprocessed food. Sugary drinks, fatty foods and sauces were most strongly associated with cancer in general, while sugary foods had the strongest correlation to breast cancer.

According to the authors, “These results suggest that the rapidly increasing consumption of ultraprocessed foods may drive an increasing burden of cancer in the next decades.” Study co-author Mathilde Touvier told CNN:37

“It was quite surprising, the strength of the results. They were really strongly associated, and we did many sensitive analysis and adjusted the findings for many cofactors, and still, the results here were quite concerning.”

Diet Is a Key Factor That Determines Your Health and Longevity

According to the authors, suboptimal intake of key foods such as fruits, vegetables, nuts and seeds, and animal-based omega-3, along with excessive consumption of processed foods such as meats and sugar-sweetened beverages accounted for more than 45 percent of all cardiometabolic deaths in 2012. In other words, the more processed foods you eat, and the less whole foods you consume, the greater your risk of chronic disease and death.

Other research published that same year found that eating fried potatoes (such as french fries, hash browns and potato chips) two or more times per week may double your risk of death from all causes.39Eating potatoes that were not fried was not linked to an increase in mortality risk, suggesting frying — and most likely the choice of oil — is the main problem.

In a 2013 presentation40 at the European Ministerial Conference on Nutrition and Noncommunicable Diseases by Dr. Carlos Monteiro,41 professor of nutrition and public health at the University of Sao Paulo, Brazil, Monteiro stresses the importance of creating “policies aiming the reformulation of processed foods,” and limiting children’s exposure to junk food marketing, in order to tackle the rise in diet-related noncommunicable diseases.

In my view, eating a diet consisting of 90 percent real food and only 10 percent or less processed foods is an achievable goal for most that could make a significant difference in your weight and overall health. You simply need to make the commitment and place a high priority on it. To get started, consider the following guidelines: 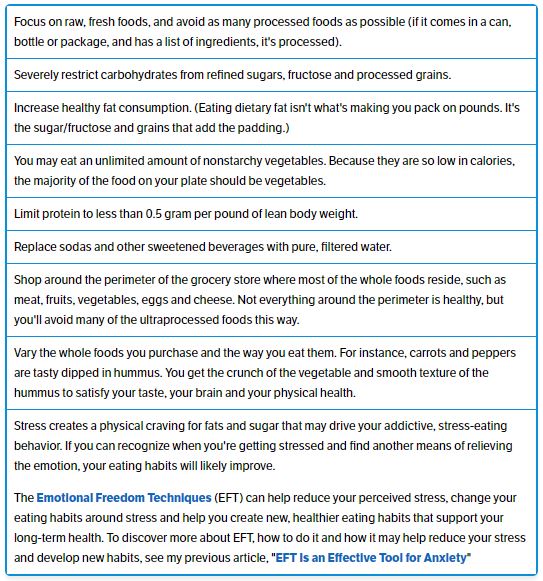