The Age of Tyrannical Surveillance: We’re Being Branded, Bought and Sold for Our Data

“We know where you are. We know where you’ve been. We can more or less know what you’re thinking about… Your digital identity will live forever… because there’s no delete button.”—Former Google CEO Eric Schmidt

To be technically accurate, Big Brother—aided and abetted by his corporate partners in crime—wants your data.

That’s what we have been reduced to in the eyes of the government and Corporate America: data bits and economic units to be bought, bartered and sold to the highest bidder.

Those highest bidders include America’s political class and the politicians aspiring to get elected or re-elected. As the Los Angeles Times reports, “If you have been to a political rally, a town hall, or just fit a demographic a campaign is after, chances are good your movements are being tracked with unnerving accuracy by data vendors on the payroll of campaigns.”

Your phones, televisions and digital devices are selling you out to politicians who want your vote.

Have you shopped at Whole Foods? Tested out target practice at a gun range? Sipped coffee at Starbucks while surfing the web? Visited an abortion clinic? Watched FOX News or MSNBC? Played Candy Crush on your phone? Walked through a mall? Walked past a government building? 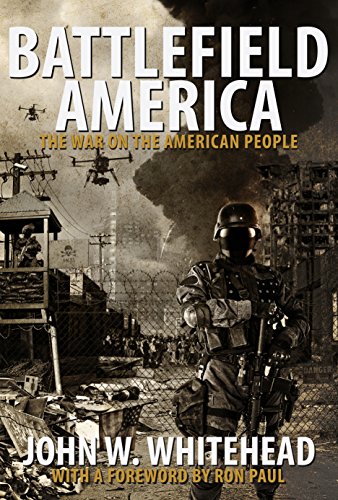 That’s all it takes for your data to be hoovered up, sold and used to target you.

This is the age of surveillance capitalism.

Once you’ve been identified in this way, you can be tracked endlessly.

“Welcome to the new frontier of campaign tech — a loosely regulated world in which simply downloading a weather app or game, connecting to Wi-Fi at a coffee shop or powering up a home router can allow a data broker to monitor your movements with ease, then compile the location information and sell it to a political candidate who can use it to surround you with messages,” writes journalist Evan Halper.

No one is spared.

In this regard, we are all equals: equally suffering the indignity of having every shred of privacy stripped away and the most intimate details of one’s life turned into fodder for marketers and data profiteers.

What’s worse, this for-profit surveillance capitalism scheme is made possible with our cooperation.

All those disclaimers you scroll though without reading them, the ones written in minute font, only to quickly click on the “Agree” button at the end so you can get to the next step—downloading software, opening up a social media account, adding a new app to your phone or computer—those signify your written consent to having your activities monitored, recorded and shared.

Every move you make is being monitored, mined for data, crunched, and tabulated in order to form a picture of who you are, what makes you tick, and how best to influence and/or control you.

On any given day, the average American going about his daily business will be monitored, surveilled, spied on and tracked in more than 20 different ways by both government and corporate eyes and ears. A byproduct of this new age in which we live, whether you’re walking through a store, driving your car, checking email, or talking to friends and family on the phone, you can be sure that some government agency is listening in and tracking your behavior.

With every smartphone we buy, every GPS device we install, every Twitter, Facebook, and Google account we open, every frequent buyer card we use for purchases—whether at the grocer’s, the yogurt shop, the airlines or the department store—and every credit and debit card we use to pay for our transactions, we’re helping Corporate America build a dossier for its government counterparts on who we know, what we think, how we spend our money, and how we spend our time.

The technology has advanced so far that marketers (political campaigns are among the worst offenders) can actually build “digital fences” around your homes, workplaces, friends and family’s homes and other places you visit in order to bombard you with specially crafted messages aimed at achieving a particular outcome.

If anyone else stalked us in this way—tailing us wherever we go, tapping into our calls, reading our correspondence, ferreting out our secrets, profiling and targeting us based on our interests and activities—we’d call the cops.

Unfortunately, the cops (equipped with Stingray devices and other Peeping Tom technologies) are also in on this particular scam.

It’s not just the surveillance and the buying and selling of your data that is worrisome.

The ramifications of a government—any government—having this much unregulated, unaccountable power to target, track, round up and detain its citizens is beyond chilling.

Imagine what a totalitarian regime such as Nazi Germany could have done with this kind of unadulterated power.

Imagine what the next police state to follow in Germany’s footsteps will do with this kind of power. Society is definitely rapidly moving in that direction.

We’ve made it so easy for the government to watch us.

Government eyes see your every move: what you read, how much you spend, where you go, with whom you interact, when you wake up in the morning, what you’re watching on television and reading on the internet.

Every move you make is being monitored, mined for data, crunched, and tabulated in order to form a picture of who you are, what makes you tick, and how best to control you when and if it becomes necessary to bring you in line.

Chances are, as the Washington Post has reported, you have already been assigned a color-coded threat assessment score—green, yellow or red—so police are forewarned about your potential inclination to be a troublemaker depending on whether you’ve had a career in the military, posted a comment perceived as threatening on Facebook, suffer from a particular medical condition, or know someone who knows someone who might have committed a crime.

In other words, you might already be flagged as potentially anti-government in a government database somewhere—Main Core, for example—that identifies and tracks individuals (so they can be rounded up and detained in times of distress) who aren’t inclined to march in lockstep to the police state’s dictates.

The government has the know-how.

As The Intercept reported, the FBI, CIA, NSA and other government agencies are increasingly investing in and relying on corporate surveillance technologies that can mine constitutionally protected speech on social media platforms such as Facebook, Twitter and Instagram in order to identify potential extremists and predict who might engage in future acts of anti-government behavior.

Millions of Chinese individuals and businesses, blacklisted as “unworthy” based on social media credit scores that grade them based on whether they are “good” citizens, have now been banned from accessing financial markets, buying real estate or travelling by air or train. Among the activities that can get you labeled unworthy are taking reserved seats on trains or causing trouble in hospitals.

Get ready, because all signs point to China serving as the role model for our dystopian future.

In fact, it was President Obama who issued an executive order directing federal agencies to use “behavioral science” methods to minimize bureaucracy and influence the way people respond to government programs.

Add pre-crime programs into the mix with government agencies and corporations working in tandem to determine who is a potential danger and spin a sticky spider-web of threat assessments, behavioral sensing warnings, flagged “words,” and “suspicious” activity reports using automated eyes and ears, social media, behavior sensing software, and citizen spies, and you having the makings for a perfect dystopian nightmare.

This is the kind of oppressive pre-crime and pre-thought crime package foreshadowed by George Orwell, Aldous Huxley and Phillip K. Dick.

Remember, even the most well-intentioned government law or program can be—and has been—perverted, corrupted and used to advance illegitimate purposes once profit and power are added to the equation.

The war on terror, the war on drugs, the war on illegal immigration, asset forfeiture schemes, road safety schemes, school safety schemes, eminent domain: all of these programs started out as legitimate responses to pressing concerns and have since become weapons of compliance and control in the police state’s hands.

In the right (or wrong) hands, benevolent plans can easily be put to malevolent purposes.

Surveillance, digital stalking and the data mining of the American people—weapons of compliance and control in the government’s hands, especially when the government can listen in on your phone calls, monitor your driving habits, track your movements, scrutinize your purchases and peer through the walls of your home—add up to a society in which there’s little room for indiscretions, imperfections, or acts of independence.

This is the creepy, calculating yet diabolical genius of the American police state: the very technology we hailed as revolutionary and liberating has become our prison, jailer, probation officer, Big Brother and Father Knows Best all rolled into one.

It turns out that we are Soylent Green.

The 1973 film of the same name, starring Charlton Heston and Edward G. Robinson, is set in 2022 in an overpopulated, polluted, starving New York City whose inhabitants depend on synthetic foods manufactured by the Soylent Corporation for survival.

Heston plays a policeman investigating a murder, who discovers the grisly truth about the primary ingredient in the wafer, soylent green, which is the principal source of nourishment for a starved population. “It’s people. Soylent Green is made out of people,” declares Heston’s character. “They’re making our food out of people. Next thing they’ll be breeding us like cattle for food.”

Oh, how right he was.

Soylent Green is indeed people or, in our case, Soylent Green is our own personal data, repossessed, repackaged and used by corporations and the government to entrap us.

We, too, are being bred like cattle but not for food.

Rather, as I make clear in my book Battlefield America: The War on the American People, we’re being bred, branded, bought and sold for our data.

As the insidious partnership between the U.S. government and Corporate America grows more invasive and more subtle with every passing day, there’s virtually no way to opt out of these assaults on your digital privacy short of being a modern-day Luddite, completely disconnected from all technology.

Indeed, George Orwell’s description of the world of 1984 is as apt a description of today’s world as I’ve ever seen: “You had to live—did live, from habit that became instinct—in the assumption that every sound you made was overheard, and, except in darkness, every movement scrutinized.”

What we desperately lack and urgently need is an Electronic Bill of Rights that protects “we the people” from predatory surveillance and data-mining business practices.

Without constitutional protections in place to guard against encroachments on our rights in the electronic realm, it won’t be long before we find ourselves, much like Edward G. Robinson’s character in Soylent Green, looking back on the past with longing, back to an age where we could speak to whom we wanted, buy what we wanted, think what we wanted without those thoughts, words and activities being tracked, processed and stored by corporate giants such as Google, sold to government agencies such as the NSA and CIA, and used against us by militarized police with their army of futuristic technologies.