American government has become a collection of sordid and dangerous clowns. It was not always thus. Until Bush II, those governing were never lunatics. Eisenhower, Truman, Kennedy, Johnson, Nixon, Obama, Clinton had their defects, were sometimes corrupt, and could be disagreed with on many grounds. They weren’t crazy. Today’s administration would seem unwholesome in a New York bus station at three in the morning. They are not normal American politicians.

In particular they seem to be pushing for war with Iran, China, Russia, and Venezuela. And–this is important–their behavior is not a matter of liberals catfighting with conservatives. All former presidents carefully avoided war with the Soviet Union, which carefully avoided war with America. It was Reagan, a conservative and responsible president, who negotiated the INF  treaty, to eliminate short-fuse nuclear weapons from Europe. By contrast, Trump is scrapping it. Pat Buchanan, the most conservative man I have met, strongly opposes aggression against Russia. The problem with the current occupants of the White House is not that they are conservatives, if they are. It is that they are nuts.

Start with the head cheese, Donald Trump, profoundly ignorant, narcissistic, a real-estate con man who danced just out of reach of the law. His supporters will explode in fury at this. All politics being herd politics, the population has coalesced into herds fanatically pro-Trump and fanatically anti-Trump. Yet Trump’s past is not a secret. Well-documented biographies describe his behavior in detail, but his supporters don’t read them. The following is a bit long, but worth reading. 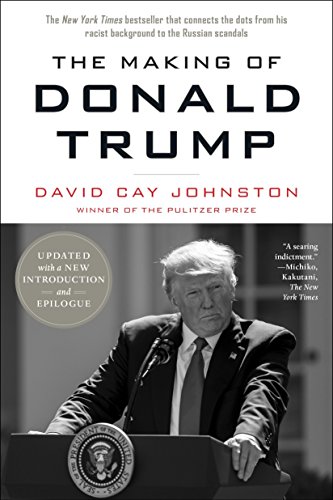 “I always get even,” Trump writes in the opening line of that chapter. He then launches into an attack on the same woman he had denounced in Colorado. Trump recruited the unnamed woman “from her government job where she was making peanuts,” her career going nowhere. “I decided to make her somebody. I gave her a great job at the Trump Organization, and over time she became powerful in real estate. She bought a beautiful home.

“When Trump was in financial trouble in the early nineties…..”I asked her to make a phone call to an extremely close friend of hers who held a powerful position at a big bank and would have done what she asked. She said, “Donald, I can’t do that.” Instead of accepting  that the woman felt that such a call would be inappropriate, Trump fired her. She started her own business. Trump writes that her business failed. “I was really happy when I found that out,” he says.

“She had turned on me after I did so much to help her. I had asked her to do me a favor in return, and she turned me down flat. She ended up losing her home. Her husband, who was only in it for the money, walked out on her and I was glad. Over the years many people have called me asking for a recommendation for her. I always gave her bad recommendation. I can’t stomach disloyalty. ..and now I go out of my way to make her life miserable.“

All that because (if she exists) she declined to engage in corruption for the Donald. That is your President. A draft dodger, a pampered rich kid, and Ivy brat (Penn, Wharton). This increasingly is a pattern at the top: Ivy, money, no military service.

A particularly  loathsome sort of politician is one who dodges his country’s wars when of military age, and then wants to send others to die in later wars. This is Pussy John, arch hawk, coward, amoral, bully, willing to kill any number while he prances  martially in Washington. Speaking as one who carried a rifle in Viet Nam, I would like to confine this fierce darling for life in the bottom of a public latrine in Uganda.

Pussy John, an Ivy flower (Yale) wrote in a reunion books that, during the 1969 Vietnam War draft lottery,  “I confess I had no desire to die in a Southeast Asian rice paddy. I considered the war in Vietnam already lost.” In an interview, Bolton explained that he decided to avoid service in Vietnam because “by the time I was about to graduate in 1970, it was clear to me that opponents of the Vietnam War had made it certain we could not prevail, and that I had no great interest in going there to have Teddy Kennedy give it back to the people I might die to take it away from.”

This same Pussy John, unwilling to risk his valuable being in a war he could have attended, now wants war with Iran, Venezuela, Russia, Syria, and Afghanistan. In these wars millions would die while he waggled his silly lip broom in the West Wing. His truculence is pathological and dangerous.

Here is  PJ on Iran: which has not harmed and does not threaten America: “We think the government is under real pressure and it’s our intention to squeeze them very hard,” Bolton said Tuesday in Singapore. “As the British say, ‘squeeze them until the pips squeak’.”

How very brave of him. He apparently feels sadistic delight at starving Venezuelans, inciting civil war, and ruining the lives of millions who have done nothing wrong. Whence the weird hostility of this empty jockstrap, the lack of humanity? Forgot his Midiol? Venezuela of course has done nothing to the US and couldn’t if it wanted to. America under the Freak Show is destroying another country simply because it doesn’t meekly obey. While PJ gloats.

Another rich kid and Yalie, none too bright, amoral as the rest, another draft dodger, (he hid in the Air  National Guard.) who got to the White House on daddy’s name recognition. Not having the balls to fight in his own war, he presided over the destruction of Iraq and the killing of hundreds of thousands, for no reason. (Except oil, Israel, and Empire. Collectively, these amount to no reason.) He then had the effrontery to pose on the deck of an aircraft carrier and say, “Mission accomplished.” You know, just like Alexander the Great. Amoral. No empathy. What a man.

The striking pattern of the Ivy League avoiding the war confirmed then, as it does now, that our present rulers regard the rest of America as beings of a lower order. These armchair John Waynes might have called them “deplorables,” though Hillary, another Yalie bowwow hawk, had not yet made the contempt explicit. This was the attitude of Pussy John, Bushy-Bushy  Two, and Cockatoo Don. Compare this with the Falklands War in which Prince Andrew did what a country’s leadership should do, but ours doesn’t..

Wikipedia: “He (Prince Andrew) holds the rank of commander and the honorary rank of Vice Admiral (as of February 2015) in the Royal Navy, in which he served as an active-duty helicopter pilot and instructor and as the captain of a warship. He saw active service during the Falklands War, flying on multiple missions including anti-surface warfare, Exocet missile decoy, and casualty evacuation”

The Brits still have class. Compare Andrew with the contents of the Great Double-Wide on Pennsylvania Avernus.

A measure of the moral degradation of America: It is the only country that openly and proudly engages in torture. Many countries do it, of course. We admit it, and maintain torture prisons around the globe. Now we have a major government official, Gina Haspel, head of the CIA, a known sadist. “Bloody Gina.” Is this who represents us? Would any other country in the civilized world put a sadist publicly in office?

Think of Gina waterboarding some guy, or standing around and getting off on it. You don’t torture people unless you like it. The guy is tied down, coughing, choking, screaming, begging, desperate, drowning, and Gina pours…more water. The poor bastard vomits, chokes. Gina adds a little more water….

What kind of woman would do this? Well, Gina’s kind obviously. Does she then run off to her office and lock the door for half an hour? Maybe it starts early. One imagines her as a little girl, playing with her dolls.  Cheerleader Barbie, Nurse Barbie, Klaus Barbie….

Another pathologically aggressive chickenhawk. In a piece in Foreign Affairs he describes Iran as a “rogue state that America must eliminate for the sake of all that is good.  Note that Pompeo presides over a foreign policy seeking to destroy Venezuela’s economy and threatens military invasion, though Venezuela is no danger to the US and is not America’s business; embargoes Cuba, which  in no danger to the US and is not America’s business; seeks to destroy Iran’s economy, though Iran is no danger to the US and none of Americas business; sanctions Europe and meddles in its politics; sanctions Russia, which is not a danger to the United States, in an attempt to destroy its economy, pushes NATO up to Russia’s borders, abandons the INF arms-control treaty and establishes a Space Command which will mean nuclear weapons on hair trigger in orbit, starts another nuclear arms race; wages a trade war against  China intended to prevent its economic progress; sanctions North Korea; continues a seventeen-year policy of killing Afghans for no discernible purpose; wages a war against Syria; bombs Somalis; maintains unwanted occupation forces in Iraq; increasingly puts military forces in Africa; supports regimes with ghastly human-rights records such as Saudi Arabia and Israel; and looks for a war with China in the South China Sea, which is no more America’s business than the Gulf of Mexico is China’s.

But Pompeo is not a loon, oh no, and America is not a rogue state. Perish forfend.

A negligible twit–I choose my vowel carefully–but characterized, like Trump, PJ, and Pompeo, by loyalty to Israel and wild combativeness. She seemed less dangerous than just embarrassing. Like the rest of this administration, she threatened war and retribution against any countries that did not obey the United States–not that she would put her own rounded pink sit-down ion the line n a war. That is for deplorables.

“After being promoted to lieutenant general, Mattis took command of Marine Corps Combat Development Command. On February 1, 2005, speaking at a forum in San Diego, he said “You go into Afghanistan, you got guys who slap women around for five years because they didn’t wear a veil. You know, guys like that ain’t got no manhood left anyway. So it’s a hell of a lot of fun to shoot them. Actually, it’s a lot of fun to fight. You know, it’s a hell of a hoot. It’s fun to shoot some people. I’ll be right upfront with you, I like brawling.”

Perhaps in air-to-air combat you want someone who regards killing as fun, or in an amphibious assault. But in a position to make policy? Can you image Dwight Eisenhower talking about the fun of squaring a man’s brains across the ground?

We have until recently never had government as aggressive, reckless, or psychiatrically fascinating as now. Again, it is not a matter of Republicans and Democrats. No administration of any party, stripe, or ideology has ever pushed to aggressively toward war with so many countries. These people are not right in the head.

Previous article by Fred Reed: Notes on a Curious People

Bought Off: Why You Don’t Hear About The Value-Free Society