Dr. Kate Flavin MD in the UK recently posted online two pictures of bacteria growing in a Petri dish taken in 2009 and 2019.  The picture shockingly shows the area of kill produced by antibiotics is nil in 2019 compared to 2009.  (Graphic below — K. Flavin)  Antibiotic resistance is said to pose a threat to health security and destroy economies.  It is difficult to imagine a world without antibiotics. 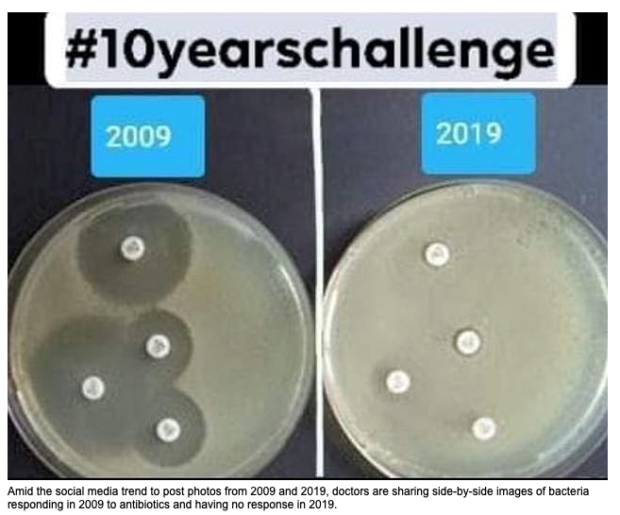 The growing number of lower limb amputations occurring among diabetic patients involve antibiotic resistant bacteria, producing horrific photos like the one below. 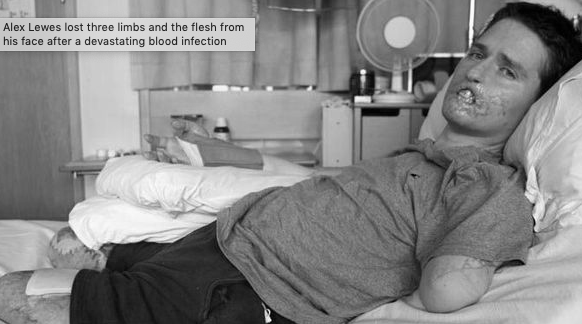 The primary problem of antibiotic resistance occurs among bacteria that don’t stain pink when a Gram stain is instilled into a lab dish.  These are called Gram-negative bacteria.  Prominent Gram-negative bacteria are Escherichia coli, Acinetobacteri, Klebsiella and Pseudomonas aeruginosa.  Gram-positive Staphlococcus aureus is also a notorious bacterium that is resistant to antibiotics.) 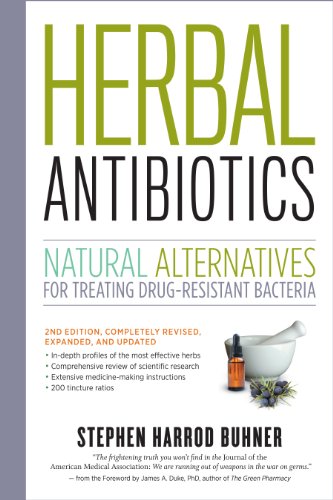 The problem of antibiotic resistance has forced modern medicine to explore the use of natural antibiotics.

Some therapeutic oils, in particular extracts from cinnamon (cinnamaldehyde), oregano (carvacrol) and thyme (thymol) exhibit strong activity against both Gram stain-positive and negative bacteria.  Carvacrol is reported to reduce infection as effectively as traditional antibiotics.  The antibacterial action of carvacrol, which is stronger against Gram-positive than Gram-negative bacteria, principally relies on bacterial membrane damage.  That means the impermeable cell wall in bacteria is actually destroyed by carvacrol, to effect a convincing kill. 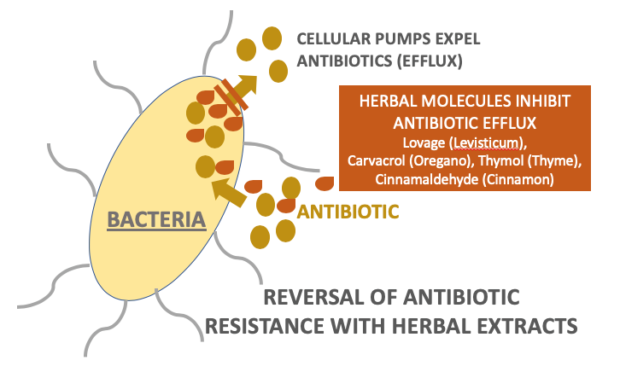 This means these natural molecules, which stand on their own to kill pathogenic bacteria, should also be used with prescription antibiotics to thwart or reverse antibiotic resistance.  Why this isn’t being done as common practice today goes unexplained. 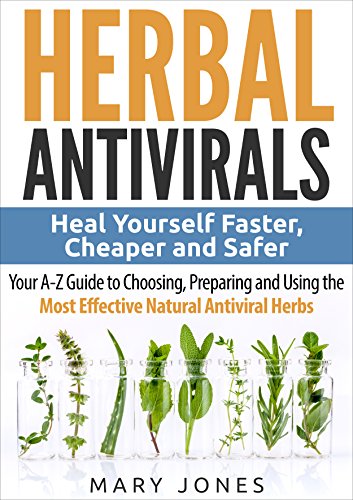 While it is generally stated that germ resistance to herbal antibiotics does not occur, there are some reports that suggest microbes can overcome herbal drugs.  Carvacrol somewhat inhibits germ resistance (20 uses before it induces the problem) but cinnamaldehyde derived from cinnamon exhibited no germ resistance after 50 uses and is therefore comparatively superior to other herbal extracts in that regard.  Remarkable!  Nature trumps modern pharmacology. 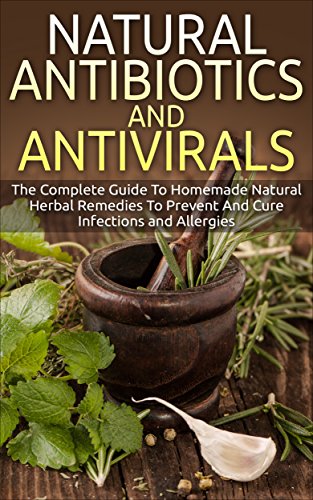 Garlic’s many antibacterial properties are well documented.  The many antimicrobial properties of allicin, the primary active molecule provided in fresh-crushed garlic cloves, or in alkaline-buffered garlic pills, has been shown to best vancomycin, the antibiotic drug of last resort when other antibiotics are ineffective.  Despite their labeling, most garlic pills do not yield allicin because stomach acid destroys the enzyme that produces allicin.  Alkaline-buffered garlic pills overcome this problem and provide as much allicin as produced in a fresh-crushed clove of garlic.  Because of allicin’s/garlic’s method of action (depletion of glutathione antioxidant from inside the cell), it is not prone to germ resistance.

Vitamin C has been identified as an antibiotic modifier, to both enhance antibiotic germicidal action and inhibit antibiotic resistance.  Of interest, the prospect of restoration of 24/7 vitamin C synthesis in the human body is now a reality.  This development could be a revolutionary advance in warding off antibiotic resistance altogether.

It may be wise to stock your medicine chest with these natural antibiotics derived from herbal extracts so they are available when needed.